From the get-go, Monster Crown wears its inspirations on its sleeves. From the chip-tune melodies, 8-bit Gameboy-esque visual style, and charming monster designs, it is pretty clear what players are going to be in for with this game. Recently coming out of early access on Steam and also launching on Nintendo Switch, Monster Crown aims to bring back the feelings many of us had collecting, battling, and evolving creatures while undertaking a coming-of-age RPG tale. I’ve always been a pretty firm believer THAT monster collecting game (you know, the big one) was truly a fluke – right place, right time, right target demographic, etc. And so I’ve always raised an eyebrow or given a side-eye to the many imitators and clout-chasing titles that have come and gone over the years. Monster Crown showed promise; a real return to the style and feel of the 90s, but I’m truly sad to say it fails to reach any substantial heights and is just fine as another baby’s-first-RPG.

Monster Crown’s narrative follows an all too familiar premise. You play as a young teen, living on a farm on the outskirts of a small town, and the time has finally come for you to embark on your very own poke-… I mean monster collecting journey. You make your way through the continent battling other trainers, collecting monsters, and thwarting the dastardly plans of the various thugs and villains you meet along the way. All the fringe extras are present too: trading, breeding, monster storage boxes, and the moment-to-moment gameplay is essentially a carbon copy of the gameplay you know from the Game Freak titles, with some twists that try to set it apart. The game’s narrative, while following the blueprints of the genre, is a darker and more mature approach to the coming-of-age adventurer tale. Indeed, early in the game, there is a confronting scene where the villain sets one of her monsters upon you, lashing out with its claws to try and beat you into sharing some information. I found the darker tone a welcome change to the tried-and-true storylines of monster collecting titles of the past.

“…monsters in Monster Crown are added to your party by forming a “pact” with you.”

Instead of capturing monsters in small red and white balls where they remain in unknown oblivion until being called upon to serve their master’s bidding, monsters in Monster Crown are added to your party by forming a “pact” with you. A cute icon of a contract is shown whenever you offer a pact to a monster, and the opposing creature will agree or disagree to your pact proposal depending on their HP and status effects. You can have up to 8 monsters in your party, which allows for some extra strategising and diversifying of your monster team than the usual 6 found in other games. I found this extra flexibility particularly useful to try and cover all types, strengths, and weaknesses.

The journey takes you across many different biomes and has you face off against a very large variety of monsters – upwards of 150. The monster designs range from cute, charming creatures to hulking monstrosities to downright bizarre hybrids. Some of the designs are impressive; doing a lot with the pixel art style, while some are just odd and, honestly, ugly. I found myself only wanting to forge pacts with the big, tough-looking monsters or the sweet looking ones, so it is very possible I missed out on some game-changing clutch monsters because I judged a book by its cover (please forgive me).

Monster Crown features an encyclopaedia of monsters to fill out, which gives way to much more replayability beyond the 20ish hours it takes to beat. Add onto this the ability to crossbreed monsters into a range of new monsters and the game truly has a wealth of content for those who want to engage with it. And therein, as the bard would say, lies the rub – is Monster Crown a game that entices players to go deep with it? Unfortunately, I don’t particularly see it.

To start simple, the game just doesn’t feel right. Default movement is slow, and then the run option feels too fast. The game also feels mightily unbalanced; I was blasting through basically the entire game just using my starting monster, an unremarkable wolf-creature, and almost never felt the need to strategise or utilise my party’s various types and movesets. The world feels entirely too familiar, at times a carbon copy of what has come before, but perhaps that is simply a symptom of 8-bit style games. One of the most infuriating downfalls of Monster Crown is the monster AI; monsters appear onscreen as encounters, much like Persona, instead of random encounters in the grass. The issue with this is that many parts of the map are inaccessible, so monsters I want to either fight or make a pact with often get trapped in areas I cannot get to. On top of that, my time with the game was riddled with bugs, and not the ones to collect in-game… actual game-crashing bugs. Too often I would open the map or journal and the game would seize up, or I would be talking to an NPC and the text box wouldn’t disappear. As mentioned before, monsters were getting stuck in areas I couldn’t access, but they would also get stuck in trees or in water. If only these bugs led to some kind of super-secret “missing number” monster (if you know, you know). 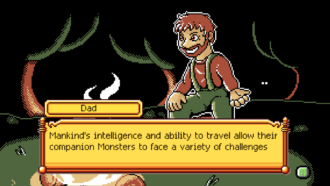 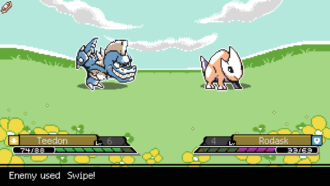 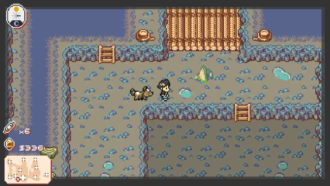 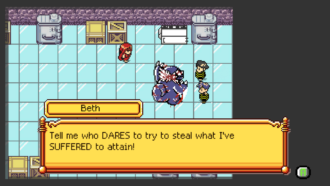 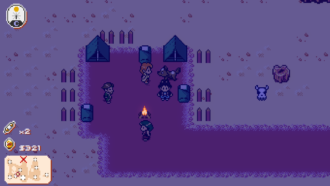 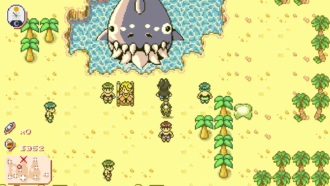 For me, Monster Crown is a competent-yet-stale entry in the monster-collecting genre that fails to impress on any meaningful level. While the opening hour showed some promise, the game falls into tired tropes that have become standard for the genre, and even with the whopping Kickstarter cash, fails to innovate or build upon what came before. I was hopeful going in and relieved going out, and am holding out genuine hope that Studio Aurum continues to work on the game until it is a polished, well-realised example of the vision the team had when starting this game. A dull comparison to the legendary monster-catching games of yore that we know and love, Monster Crown fails to catch ’em all.