There are very few things in gaming as exciting and monumental as the launch of a huge, new MMORPG. It’s that feeling of exploring an expansive world with limitless possibilities alongside millions of others for the first time that’s so appealing and difficult to capture. It’s also the feeling of getting in on the ground floor of what could be the next big thing that helps to fuel the exciting potential of what’s to come.

Amazon’s New World has definitely left an impression on the gaming landscape. Built to replicate the legendary MMOs of yore, New World brings an old school appeal that leaves a lasting impression. Now, as a player approaching level 50 with end-game content just in sight, I’m finally ready to bring my evolving thoughts on this expansive release.

With a vast open world sprawling with hostile foes, resources to gather, quests to start, and other players going about their business, New World feels like a traditional fantasy MMO. Where players may feel the difference is in the game’s modern presentation with great visuals and audio, as well as the action combat that feels much more lively and skill-based than many of the games that came before it.

It’s no secret that New World’s influences in the MMO space come from older genre mainstays like World of Warcraft Classic and Oldschool Runescape. It’s a potentially divisive decision as players will find themselves grinding for resources in an attempt to slowly raise their trade skills. It also means things like territory control and the game’s economy are left almost entirely in the player’s control. As a fan of these classic MMORPGs, I couldn’t be happier with these decisions. Amazon has the confidence to leave aspects of the game’s core functionality to the player and successes feel earned rather than handed to you, even if it is an admitted grind at points.

Combat is rather open in design, allowing players to play around with different weaponry as they acquire cool new loot. Unlike other MMOs, there are no classes to lock players into certain builds or roles. Instead, builds are gated by four core attack stats that scale with different types of weapons – Strength, Dexterity, Intelligence and Focus. A fifth stat, Constitution, dictates the player’s health pool. Up until level 20, these stats can be redistributed freely, allowing players to fiddle around with builds and find their niche. It’s a nice balance of freedom and structure that feels rather forgiving whilst still rewarding players for specialising and sticking with it.

Whilst there are no classes, roles like healer, DPS, and tank are still prominent for both PvE and PvP content. Weapons will also increase in level through use, unlocking powerful abilities and passives. The system works well. Weapons and their attack patterns are distinct and enjoyable, some up close and aggressive, others facilitating speed and maneuverability, and others raining down firepower from a distance. 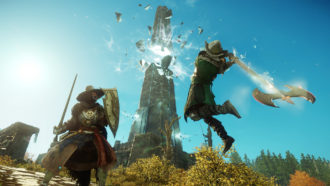 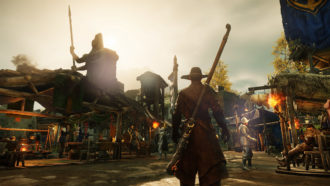 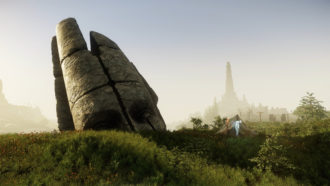 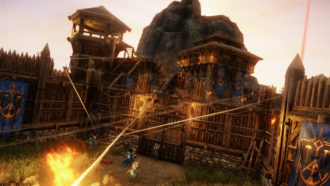 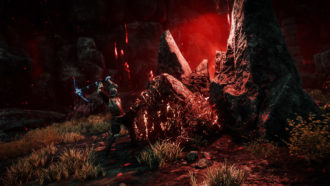 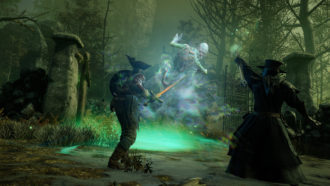 With three factions vying for territory control, PvP ends up playing a rather large role in New World for those willing to engage. Companies can own territory and make money on the taxes spent by other players. There are also benefits for being within the faction that owns a given territory and I’ve witnessed some rather heated moments of real emotion when one faction seizes control of a territory from another. These wars are monumental and it gives the game a sense of grandeur and meaning. On the flip side, individual bouts of PvP are rather meaningless. I’d love to see more encouragement for players to engage in PvP outside of faction wars to give the game an extra feeling of tension and additional risk/reward content for those wanting to participate.

All of this combat content works largely thanks to how smoothly New World runs. It’s no secret that many MMORPGs have had rather basic combat in the past and that’s likely largely due to how challenging it is to facilitate real-time action combat in a massively multiplayer space. Sure, things weren’t perfect on launch, but New World’s servers, when you’re actually in and playing, are buttery smooth. As an Australian, I’m not always used to having a game launch with a local server allowing me to play on low ping, but in this regard, Amazon delivered. The launch of the game was rocky with server queues stretching into the tens of hours. Though thankfully that appears to be an issue of the past.

“…New World’s servers, when you’re actually in and playing, are buttery smooth.”

Where New World falls short is in some of its questing and copy/paste locations. It’s no secret that the MMO genre has often been mocked for weak quest design that often amounts to collecting X resources from the corpse of Y enemy. New World takes that formula and absolutely runs with it. An excruciating amount of the quests you’re given in-game ask you to kill certain enemies, loot certain items from slain enemies, or loot certain items from caches within an area. I understand why it’s done. It’s a tried and tested format that allows them to generate heaps of replayable content for a demanding and devoted audience who are constantly in need of stimulation. It’s also seen as the lesser of two evils when compared to a system that has players killing mobs over and over again as its core leveling up system. Although even with that said, New World’s questing still feels stale and uninspired. It’s a regression on better-implemented systems from past games and something I’m hoping to see improved as New World goes through its ongoing development.

Exploration doesn’t always feel rewarding as you come across similar enemies, structures and townships. There’s a good amount of copy/paste work going on that becomes noticeable as you venture inside the same house structure for the umpteenth time. As you begin to level up and explore the world a bit more, you do start to progress into areas with different theming and visuals and it does a lot to help things from feeling stale. Particular shoutouts have to go to Restless Shore’s pirate-themed town with a giant ship docked in the middle of a vertically structured hub. Ebonscale Reach is another gorgeous locale which draws inspiration from Chinese architecture and flora. It’s a breath of fresh air to stumble into one of these areas for the first time after questing for hours upon hours in the same place. I just wish that progression felt a bit more natural or driven by the player rather than the result of chasing quest markers for a side mission that you’re not really paying attention to. 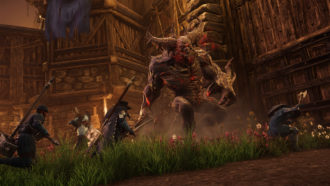 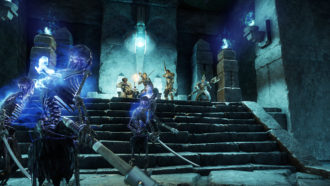 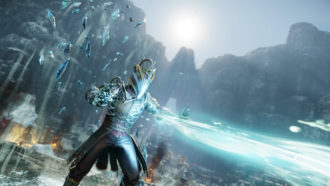 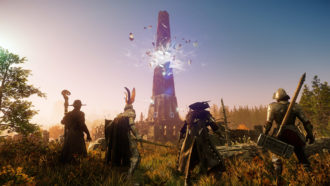 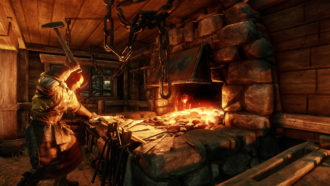 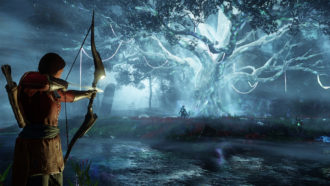 As an MMORPG, New World does most things right. There’s heaps of fine-tuning that will help move this game from competent to a true genre juggernaut. Balancing out the gathering skills so that tracking & skinning isn’t 20 times easier to level than fishing, or rejigging the game’s economy so that it isn’t such a buyer’s market. Little details like this are easily ignorable upon launch but become more egregious months or even years later. Why is it that my character simply begins walking underwater and drowning without any specific animation or elegant system? New World is at the cusp of something brilliant and the ability to add more content whilst ironing out the bumps along the way will be crucial to its longevity.

At the time of writing, I can happily say that Amazon’s new foray into the world of massively multiplayer role-playing is a tentative success. There’s the core of a really phenomenal experience here that with continuous love and attention can blossom into an experience worthy of standing the test of time. What’s next for New World? I’m not sure. But for the foreseeable future I intend to play along and find out.