Long on ice for several years, Project Zero (or Fatal Frame as it may better be known in other localisations) as a series is a bit of a dark horse in the horror space. Undoubtedly having its dedicated fans, it hasn’t exactly prospered in recent years like Resident Evil nor is there loud begging for its return, like the more prolific and absent Silent Hill series. Until now. Project Zero: Maiden of Black Water is a remastered port of the 2014 Wii U game, now available on current-gen consoles and PC.

This may not be the prime entry fans were after a remaster of, but it was a welcome enough onboarding for me as a series newcomer. In theory, it too is a good testing ground for whether a series return is worth it. I’ll spoil that for you now. It is.

There’s something dark in that mountain

Maiden of Black Water situates the player in control of three protagonists. These are Yuri Kozukata, a young woman with ethereal powers that link to the dark world, Ren Hoji, an author and friend of Yuri, and lastly Miu Hinasaki, a link to the earlier games, being the daughter of previous protagonist Miku. All their stories interconnect, crossing paths and all coming back to one key sharing factor: the eerie fictional mountain known as Mt Hikami. Stated over many generations to be the place people go to take their own lives, its intrigue and dark history is clearly inspired by the real-life Aokigahara.

Each on the hunt for their own answers within the mountain, such as Ren’s research for his latest book, our heroes will happen upon many a spirit or twist and turn that’ll challenge their path. Maidens of a past life have taken hold of the mountain, suggesting they are the very reason for the many that have taken their lives in this eerie environment. Miu, originally around in-game to assist Yuri, soon sees visions of her mother. What could it all mean?

All of that makes for an intriguing premise. While Maiden of Black Water is near expert in its slow build, always offering many questions to ask and mysteries to solve, it takes a little too much comfort in this method. Coming out of its thirteen hour or so duration, there is plenty of time spent faffing about with pacing issues and reveals that take too long to see the light of day.

You see, while there’s plenty of provided cutscenes, they only serve the quick purpose of getting a character ever nearer to their goal. Most of the information about what’s actually going on is placed in readables around the place and excerpts of text you get between levels. That’s not necessarily a bad means to go about telling a story, it just feels like the answers to questions you’ll have throughout are a bit of an afterthought. This becomes more noticeable the further you proceed. The penultimate level in particular offered the highest amount of these journals and notes to read, quickly relaying key information. Not how I want my horror games to unravel.

Additionally, the only voiced option visible in-game, at least in my copy, was in English. For more investment, I would’ve loved to see the original Japanese voice acting for the game, so as not to have to deal with the hokey English version. It often strangely fell quieter than the game audio and music, with the addition of subtitles only aiding so much. Campaign shortfalls aside, it becomes forgivable when you consider one big and important fact – Project Zero: Maiden of Black Water has a killer atmosphere throughout its entire runtime. Seriously.

A mountaintop faced with many ghostly individuals big and small, simultaneously containing whisperings of cults and mass suicide is a hell of a setup. In its environment, character and monster design, Maiden of Black Water takes advantage of all of its strengths. While you will be revisiting many locations, whether it’s a heavy and dangerous climb higher up the summit or a retreat that’s by the skin of your teeth, the imagery is enticing and thrilling.

A shrine temple full of dolls that come to life, ghostly hands reaching through walls or a drenched and gowned woman with jet black hair, raising out of a lake… the despair filled vibes are palpable. Rarely does this game rely on jump scares, something I’ve been told is true of the entire Project Zero franchise. They’re peppered through so sparsely that the only egregious offender becomes the infamous ghostly hand that will often reach out to grab you whenever you go to grab an item. Prepare yourselves for this, fellow newcomers, it gets old. Fast. Still, the fact that it’s the cheapest jump scare speaks volumes.

“A mountaintop faced with many a ghostly individual big or small, simultaneously containing whisperings of cults and mass suicide is a hell of a setup.”

Every moment of dread, whether it’s your screen filling up with ghosts to overcome, or seeing a character suffer an ill fate is welcome and unique compared to that of horror games in recent memory. This here reminds me how sorely I’ve been missing traditional Japanese style horror.

While I appreciate what longstanding franchises like Resident Evil have become, I can’t help but feel they’re feeling gradually more Westernised. Here in Maiden of Black Water, we have an undoubtedly Japanese inspired setting, with a deep exploration of its mythos. It’s rich and quite unmatched. That much is clear in its iconography, themes and devastating monsters.

That comes with a catch. As this is peak Koei Tecmo, it deals with troubling and needless sexualising of female characters that just do not ask for it. Where the original costume design of Japanese street fashion feels authentic, its fabric hugs the women’s figures just a little too much. It’s even more glaring and undeniable when you’re provided with the opportunity to doll up the female cast in bridal and swimwear. C’mon Tecmo, I’m just to enjoy some good old horror. Need we do this once more? 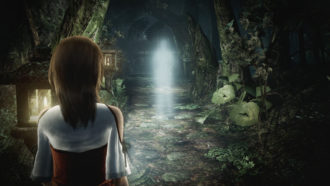 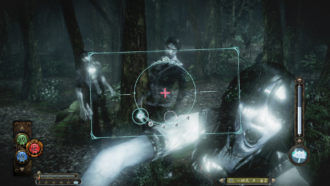 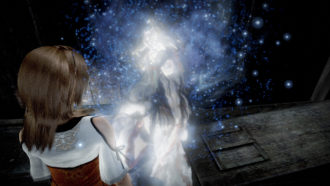 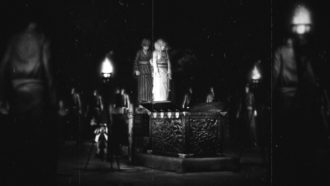 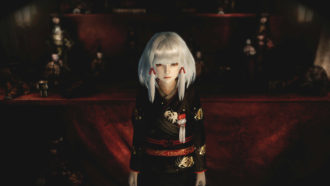 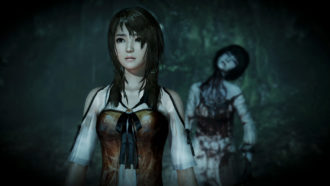 Of course, Maiden of Black Water is just as heavily all about its gameplay. Like prior Project Zero entries, handling the spirits is achieved via using your ethereal camera. Focal points will occur on all foes, highlighting their face but also the spirit orbs that emanate around them. Position your shot to capture as many of these enemies and points in one grab and you’ll come away with real damage. Where the original Wii U version of the game asked players to manipulate their GamePad, playing on PS5 sees one moving around their DualSense controller to frame their shots. It translates actually quite well with the new controller’s bells and whistles. Upon unlocking the ability to slow spirits with your camera, a lighter R2 press achieves this feat, while a full press takes the shot itself. I couldn’t help but be transported back to the early days of the Wii and PS3 generation, where using motion controllers felt joyous and next level.

While the gameplay loop of taking pictures in this form is already satisfying on a basic level, a great feeling of reward can come from studying and bettering the way you get snapping. Pulling off angled shots that just cheekily include an additional baddie in the back or foreground feels great. As such, it’ll leave you with more damage and points gathered, which later can be spent in menus to unlock costumes or, more importantly, upgrades to your camera including faster film reload or more damage output.

Hearing over the years about the majesty of how the cult series Project Zero handles its photography gameplay is one thing. Seeing it in action is another. Making your way around a tight-knit space, filled with dreadful ghosts after every fiber of your being becomes a puzzle in its own right. Just where do you find your footing to dance around these foes, dispatching them efficiently? That’s up to you to decide. Using your camera in actual puzzle elements such as revealing items in the spirit world to bring them into the one you currently inhabit is an addition here also. It’s just the right amount of juicing of the camera mechanic, never feeling too unwelcome and often helping with some of the drier and quieter moments.

Amidst all of this is also some survival horror gameplay. Depending on your difficulty, the spirits on Hikami Mountain can make a real dent on your health. Healing herbs can aid in this regard. The Maidens are drawn to wetness, noting that whenever you trudge through knee-high bodies of water, a meter is filling up. The higher this is the more intense and frequent the enemy spawns will be. It’s a nice touch to contextualise all the enemies you’ll be facing, with the opportunity to pop a drying ember to dry your character off and ease things off is all the more helpful.

It may be far from the strongest entry in the Project Zero adventures, but I’m still glad I played Maiden of Black Water. Now experiencing at least one game, I’ve now seen firsthand the strengths the series has to offer and I can’t wait to only have a better and better time the more titles I play. Project Zero’s photography is fantastic and I now find myself eager to go hunting online for the past entries.

I’m a little sad about how Maiden of Black Water resulted in Project Zero’s pause as a series. Great photography gameplay is on offer and had me frantically thinking on the fly to snap some solid (and horrific) photos. Poor pacing, voice acting and less than admirable treatment of female characters is present though, which can at times be tough obstacles to overcome. Still, the eerie atmosphere the game sets up for itself remains throughout. It is a thrilling, quite pleasurable experience that, while the answers may not always be satisfying, will leave you guessing until its conclusion. I can only hope this remaster is the start of a new turn for the series. Flaws and all, the Project Zero franchise is more than worthy of another shot in the spooky spotlight.