The Lightbringer Review – The light within

Ah, the humble platformer, the most timeless genre in all of gaming. We’ve no shortage of them in the market, with new release The Lightbringer attempting a simple but engaging take on the expansive genre. Beneath its colourful exterior is a game that I found equal measures fun and tedious. It is a quaint adventure through nicely themed worlds, each culminating in a boss battle that either serves as the cherry or hair on top of the dessert. It’s a deceptive challenge that rewards patience and frowns on hasty actions.

The Lightbringer lets you play as a knight, returning to their homelands after receiving a letter from their sister stating that she can no longer protect the land from the cursed slime that threatens the world. Now it’s up to you to journey across the world, defeat the slimes in your way, take on fearsome slime-infested bosses, and ensure the safety of the land.

I may not be a platforming pro but The Lightbringer’s deceptive simplicity lured me in. Maybe it’s the toy box level design or the humble art style, but picking the game up is easy because it beckons you in. The game’s art direction can occasionally feel a little too well put together, but echoes of a hand-drawn earnestness are still present. The levels feel as though much care has gone into how they play. As you progress through a chapter, the knowledge you gain on approaching the puzzles compounds so that by the end you do feel as though you’re better at the game for what you now know.

“The levels feel as though much care has gone into how they play.”

The game features 4 uniquely themed worlds that each introduce new concepts before culminating with a boss battle. Progression through the chapters isn’t locked, so as you unlock a level, you also unlock the next one. This comes in awful handy if you become disincentivised by a boss battle or one difficult part of a level that you can’t pass. It takes the pressure off and allows the player to focus more on nabbing all the collectibles in each level. That’s where the fun is in this game. Scouring levels for that last red crystal only to find it near the beginning in the most obvious spot would give a huge sense of achievement. It adds to the drive one has to fully complete a really challenging level.

The Lightbringer did surprise me by having a voiced acted script. The character of ‘Sister’ acts as a bridge between the player and the narrative of the game. Playing as ‘Brother’ means the relationship is preestablished. Their connection adds more fuel to the game’s call to action as you jump, dodge roll, and boomerang your way to the end of each level. While there are times where her dialogue can feel overdone, in the grand scheme of the game, it plays into the vision. Her lyrical lines add a particular cinematic quality to the game that many games aren’t able to pull off. It’s easy to see that a lot of effort has gone into her lines and making the most of having a voice actor present in the game. All of her lines are delivered in rhyming couplets and it gives an immersive feel.

The brother character we play as is rather cut and paste, bearing a distinct similarity to The Kid from Bastion, though I think it can be forgiven for that. The player character isn’t at all the focus of the game past his relationship to Sister. He’s totally silent throughout so we’re left in the dark about anything past the archetype of his knight role in the game. He’s there to serve as the player’s vessel to experience the levels and story of the game. They definitely could’ve added more to him, fleshing him out so we sympathise with him, but he gets the job done 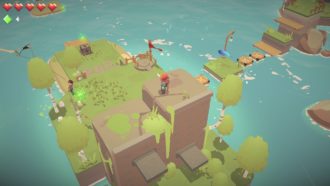 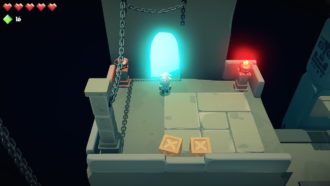 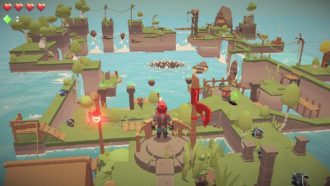 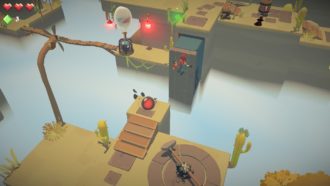 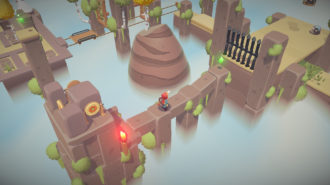 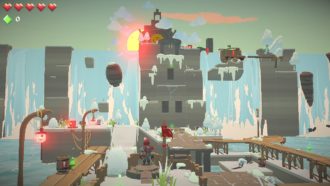 The game will certainly bring you that nostalgia fix if you’re at all familiar with 3D platformers. The distinct worlds and level design give me an ache to return to those tricky Mario or Zelda levels that require a steady hand and perfect timing to traverse. It almost has a textbook approach with some of the obstacles you face such as the corkscrew mechanics to move platforms and the dissolving sand blocks that are common throughout the game.

Working your way through the levels involves reapplying logic in the later levels, even combining that knowledge with the use of the boomerang or jumping across the ice platforms. One of my favourite sections in the game involved standing on a button and using the boomerang to hit targets that turn off fans so you can avoid being pushed off the floating platform. It was fun in that it was quite challenging lining the timing up, but the reward of doing it was worth it.

“…tricky as the platforming at times can be, it’s the boss battles that kick you in the teeth.”

Now, tricky as the platforming at times can be, it’s the boss battles that kick you in the teeth. While the levels had a certain restrained nuance, the boss battles felt more clumsy and less enjoyable. The first boss battle is against the Forgotten Sentinel, a golem-like foe with 2 large hands that it uses to attack the player. To defeat the sentinel, you need to hit slime weak points on the hands. The concept is there, but the boss patterns felt inconsistent and frustrating. The next battle is against the Desert Dragon which floats around a stage and you need to hit the joints of the creature. This one made me rage quit multiple times. Timing the hits on the joints was ridiculous and it didn’t take me long till I was making mistakes due to how frantic the battle is. The stage is also a series of islands with sand and floating platforms, so it’s a recipe for disaster!

The Lightbringer’s final boss fight is its saving grace. While I don’t want to spoil the battle, I will say that it combines the platforming and battle elements of the game in a way that other battles didn’t. It’s a really dynamic fight, making players climb a tower as they attack the final boss. This battle is a challenge, but with the game’s story woven through, it feels like the perfect conclusion for the game. If anything, it would’ve been nicer to see boss battles that aren’t combat-focused but instead test the platforming skills gained in that chapter.

Interestingly, the game doesn’t feature checkpoints either, which would’ve been welcome considering the difficulty of some of the later levels. I quit the game a lot after having almost all the collectibles in a level only to die. It did make it feel harder, though not in a rewarding sense. Often where the game is its simplest is where I would end up dying due to being overconfident or just making a mistake.

Another issue I had in The Lightbringer was the camera controls. While it was great to have full control and turn the camera as needed, in some sections, this becomes a liability as camera positioning can lead to a section being much harder than it really is. This was common in the dungeon sections. Platformer veterans will know that having the camera in these sections snap to an optimal point would’ve been appreciated so as to avoid accidentally getting gungho with my own camera swivelling. It’s hard to balance moving the camera while also course-correcting in a level.

The Lightbringer definitely brings some platforming joy to the surface but stumbles with uneven boss encounters. The game is easy to pick up with a gradual increase in platforming difficulty, though the lack of a checkpoint system may be a drawback for those less tried and tested to the ways of platformers. There is depth here if you’re after a challenge but The Lightbringer may end up leaving you a bit wanting.