Welcome to Battlefield 2042, the seventeenth instalment in the long-running and fan favourite war franchise. The first-person shooter and tactics game is multiplayer-focused, being the first entry not to include a single-player campaign since Battlefield 2142 in 2006. It’s clear developers DICE and publishers EA want to make an impact with Battlefield 2042 – but does it breakthrough?

This review is based on controlled sessions of the Preorder Access build released on 12 November 2021. Over three days, we played All-out Warfare, Hazard Zone, and Portal in four to five-hour chunks. As you’d expect with evolving multiplayer games of this scope, certain experiences and gameplay meta may change after launch.

Taking place in the same continuity of Battlefield 3 and 4, 2042 is set two-decades after the War of 2020. Extreme climate change is causing massive global conflict, many government powers have collapsed, and a population of 1.2 billion are now displaced. A worldwide blackout leaves the last two remaining superpowers, the United States of America and the Russian Federation, pointing fingers – and war erupts. What a scary yet awfully realistic concept.

Battlefield 2042 reunites players with the gameplay they know and love, with a few welcomed innovations. An overhaul to the class system introduces 11 Specialists with unique skills rather than the rigid roles of Medic, Assault, Engineer, and Recon in previous games. In loadouts players can select various equipment and weapons to effectively build distinct classes for their squad composition and current situation.

For example, Maria Falck is a strong and experienced medic from the German army who carries an S21 Syrette Pistol and can heal teammates from a distance, making her both a terrific medic and frontline assault. It encourages experimentation and enables versatility during tense encounters.

High-tech military of the near future

An on-the-go weapon customisation system makes switching attachments an absolute breeze in Battlefield 2042. Soldiers can bring up the Plus menu in mid-combat to swap between their unlocked silencers and muzzles, optical scopes, magazines, and foregrips. On multiple occasions running across large spaces, I needed a longer scope to fire at enemies far away and then back to iron sights for close-quarter combat. It’s an excellent feature considering how vast Battlefield maps can be.

Another addition is the vehicle drop-off request. Like weapon customisation, players can open a menu and select robot drones called Rangers or off-road vehicles to be delivered right in front of them. Instead of intentionally dying and respawning to get where you need to be quick, this mechanic allows swift movement across the battlefield. It’s another handy addition to 2042’s core action.

There are a few shortcomings to the gameplay, though. Playing stealth is very challenging at the moment due to excruciatingly long takedown animations that leave players vulnerable for up to five seconds. For whatever reason, there is no map zoom to get a closer look at the dozens upon dozens of tiny triangles moving around, which feels like a lazy oversight. Imbalances in vehicles and weapons are a concern as well, with helicopters often overpowering the war. 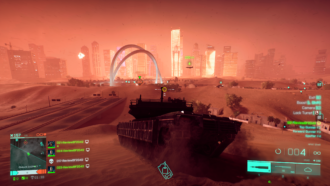 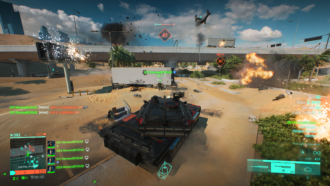 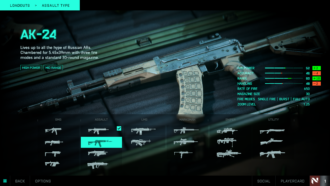 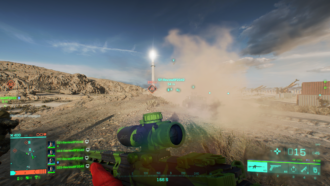 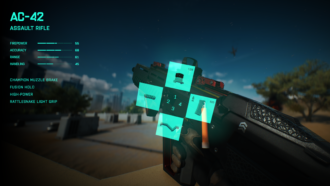 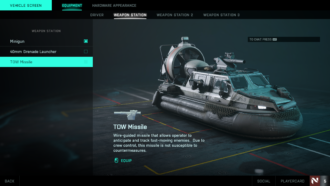 Conquest and Breakthrough make a triumphant return at a colossal scale in All-out Warfare. Supporting 128 players on PC and current generation consoles, and 64 players on previous gen, the size of battles in this game mode are blockbuster. Soldiers rely on tickets, or lives, as their resources to dictate victory. Teams will be capturing points within sectors in both Conquest and Breakthrough, helping bolster forces to overthrow the opponent.

At its core, Battlefield 2042 All-out Warfare is thrilling and straightforward. Kill or be killed, capture objectives, and cooperate with squads to survive. However, the maps aren’t balanced for these game modes. In Breakthrough on maps Renewal and Hourglass, the Defenders are dealt a poor hand of open dunes and minimal cover, vulnerable to all types of long-range snipers, tanks, and strafing runs from above. The layout also enables Attackers to pick off Defenders within the spawning area, putting them at a choke point before even stepping foot onto the battlefield. These issues are less-so in Conquest where capturing is not linear.

The dynamic weather impacts are undoubtedly exciting but still don’t feel as impactful as they should. Like our Beta preview, the tornados and sandstorms will brew just out of sight but never really cause any major threat or change to gameplay and tactics. It makes the spectacle of these climate disasters so much less impressive and almost gimmicky. A disappointment and underutilisation of an exceptional physics engine, especially as a successor to Levolution coined in Battlefield 4.

Be cautious of the Hazard Zone

Hazard Zone serves as a tighter, squad-focused survival experience, new to the Battlefield series. In lobbies of 32 players, teams of four must retrieve Data Drives throughout 2042’s huge maps while defending against Occupying Forces AI. Uplinks scattered around provide Rangers and vehicles as bonuses, as well as redeploy tickets to revive fallen teammates. Once one of two extraction points open, it’s a mad rush to get out of the Hazard Zone.

This new game mode likens itself to a smarter Battle Royale. Soldiers must buy equipment and weapons at the beginning of each match with accumulated points from previous games. As such, strategy around loadouts is far more critical than the usual All-out Warfare. Depending on a squad’s composition, playing the waiting game near extraction points with long-range weapons can be advantageous. Or, an optimised team of armoured guns-ahoy can rush in and grab a handful of Data Drives before everyone else. It’s full of ‘woah, I can’t believe we pulled that off‘ moments.

“It’s full of ‘woah, I can’t believe we pulled that off’ moments.”

At the top of a frosty cavern in Breakaway, our squad spotted a rival team running off with Data Drives and were able to sneakily wipe them out from above in a fight of verticality. In the final moments of a match on Discarded, the extraction vehicle was arriving on an abandoned cargo ship and we defended ourselves in a chaotic firefight against several squads, only to be valiantly taken down by the AI who arrived just before the extraction.

Where it currently struggles is with the maps and layout. Hazard Zone takes place on smaller areas of the 2042 maps without many changes. While there is close-quarter combat, it’s mostly just large open spaces. The AI is often grouped within specific buildings, and squads running across flat land will easily be eliminated by teams sniping at the edges or vehicles driving by. There needs to be more cover, decoys, and opportunities for various strategies to match the slow and methodical intensity. Seeing some of the Portal maps integrated into Hazard Zone would be a match made in heaven. Hazard Zone can be outstanding but DICE need to decide whether this is a full-scale battle royale or a slower-paced objective mode that desperately needs dedicated maps. 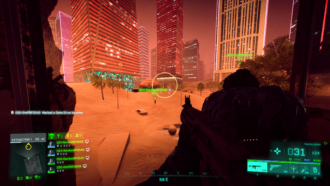 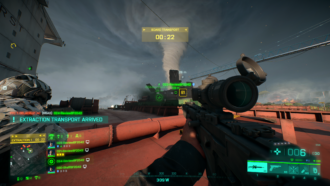 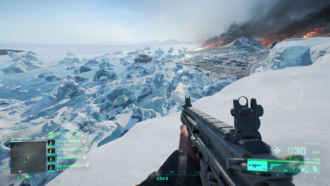 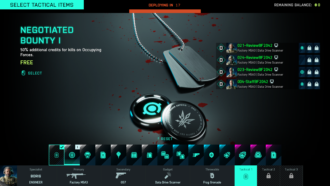 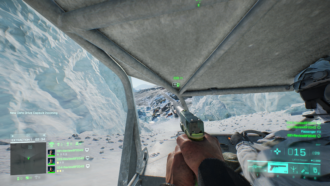 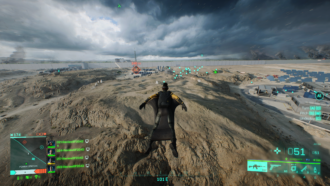 Battlefield Portal might be the selling point for many fans of the long-running franchise. Included with Battlefield 2042, Portal combines Battlefield 3, Battlefield 1942, and Battlefield Bad Company 2 into a forge/custom mode builder. Classic weapons, classic maps, classic action – it’s a love letter to diehards.

We played a pre-built VIP Fiesta mode which the game will launch with. A simple ‘kill the VIP and the team with most kills wins’ game, but the twist is the mix and match of Battlefield franchise guns and equipment. Soldiers with 1942 loadouts taking down Bad Company 2 squads on Battlefield 3 maps, it’s surprising how adaptable Portal can be.

The Battlefield Builder is a web-based tool that allows players to develop custom modes with fairly in-depth logic and systems. Yes, unfortunately the core of the tools aren’t built into 2042, which will frustrate some. Still, there are fascinating creation possibilities. Seasonal creator and game mode spotlights will showcase the best designs in Portal, possibly harkening a community like custom Counter-Strike or Team Fortress 2 servers.

Although, I think the likely outcome of Portal will be players buying Battlefield 2042 solely to play an updated version of their favourite Battlefield games. It’s a nostalgic feeling like no other to decimate in a tank across the Caspian Border or pushing past choke points in Rush on Arica Harbor, using the respective games’ tools, weapons, and even physics – probably better than 2042’s main content. At the moment there are only six legacy maps, but even that is worth hundreds of hours of fun. 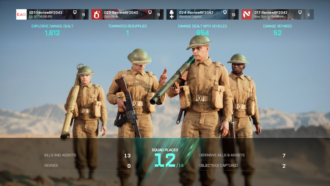 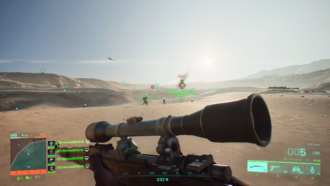 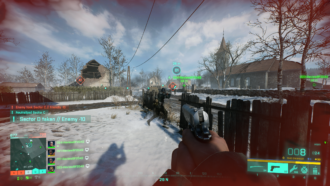 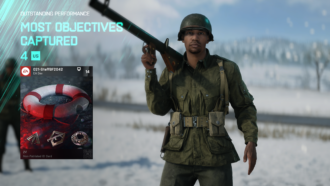 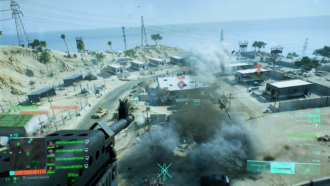 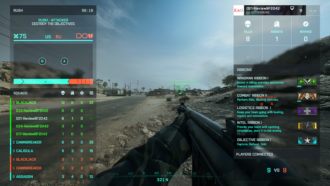 Grit and grime of war

As always, the next Battlefield game needs to be a visual feast and 2042 doesn’t disappoint. The red sandstorm that blows over the bright lights and dunes of Hourglass soaks the map in a neon, Bladerunner-like display. The icy glaciers of Breakaway set upon a backdrop of blizzards and explosive silos upon oil rigs turn this beautiful landscape into a terrifying warzone. The lighting and visual effects are superb on PC, taking proper advantage of RTX technology.

“The red sandstorm that blows over the bright lights and dunes of Hourglass soaks the map in a neon, Bladerunner-like display.”

The audio, on the other hand, isn’t as great. 2042’s mix doesn’t sound nearly as precise and consistent as other games in the series. Muddy and mediocre directional audio make it challenging to pinpoint enemy footsteps, fire, and general sounds. The score isn’t too memorable, either. That Battlefield booming motif we all know and love is barely in the 2042 maps, and instead an electronic tune plays when nearing victory or defeat, which honestly depresses the mood. Adversely, the Portal maps use the classic music and sound effects from the corresponding game and is the perfect cherry on top of the ice cream sundae.

Regrettably, there are a few performance issues. With 128 players and so much action happening at once, frame rates will not be stable. They aren’t terrible, still reaching consistently above 60fps on an RTX 3080 GPU, but competitive players who expect a smooth 120fps+ will need very high-end hardware. There are also minor concerns with input lag and network latency, the game client minimising randomly, defibrillators not working correctly, and losing audio. Likely only bugs dependant on particular situations that should be resolved soon.

The biggest and boldest Battlefield to date, 2042 combines trademark action with impressive innovations. Experimentation with loadout and attachment changes drive the enormous spectacle of 128 player warzones and dynamic weather events. Hazard Zone provides the grounds for extremely tactical gameplay but needs refinement to make it a lasting experience. The shining star without question is Portal, allowing series veterans to jump back into their favourite legacy maps and muck around with creative modes and features – it’s basically four games in one package. If it wasn’t for a few poorly designed 2042 maps, combat balancing issues, and performance concerns, Battlefield 2042 might be the best in the franchise.

GreedFall 2 announced for a 2024 release

Fall Guys going free to play across ALL platforms