Most people have grown at least familiar with the name Demon Slayer over the last few years. This popular manga-turned-anime has progressed through TV series, to movies, and now into this battle arena game titled Demon Slayer -Kimetsu No Yaiba- The Hinokami Chronicles. With the buzz of season two’s release hyping up the name once again, let’s dive in to see if The Hinokami Chronicles holds up to the same excitement as its name provokes.

Demon Slayer -Kimetsu No Yaiba- The Hinokami Chronicles follows the story from the anime of Tanjiro and his sister-turned-demon Nezuko, fighting through demons in a journey to turn Nezuko back into a human. This 2V2 arena fighter has two modes of play for you to experience; Story Mode and Arena Mode.

You may be surprised to learn that you don’t have much of a choice on which mode to start with when beginning the game. Unless you already have Kimetsu Points acquired to unlock some playable characters, most everything is locked up behind Storyline completions.

Starting things off with no time to spare in Story Mode, we are thrown into our first battle after a short introduction scene. The game mode begins at the climax of Tanjiros training against Sabito before Final Selection. It ties in nicely as an all in one tutorial section since this is where Tanjiro must use everything he has learned thus far to prove his readiness to Sabito.

The tutorial starts from the very basics of the battle screen, making it a friendly introduction to beginners in the anime battler genres. Having most of the information provided all at once did make it a bit of an information overload, but fortunately, it’s patient enough to let you get used to everything before moving onwards.

There are various button combinations used in combat that will trigger basic combo attacks, blocks, special moves and finishers, as well as being able to summon aid and switch out with a second character during battle. Playable characters will have different fighting styles with really awesome visuals that feel so satisfying when you land a good hit. All the general inputs are universal for every character, so jumping into playing others later on is easy to navigate.

Some of the button inputs during battle can be a touch sensitive at times though. I’d often find myself doing attacks I hadn’t intended to just because I hadn’t tilted the stick the exact way it wanted me to. Add to this a very noticeable and unfortunate input delay and you get battles that are much more annoying than they are enjoyable. 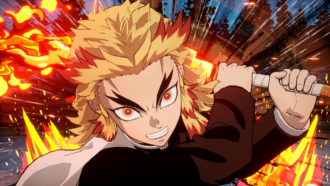 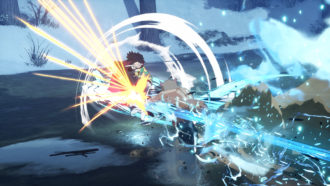 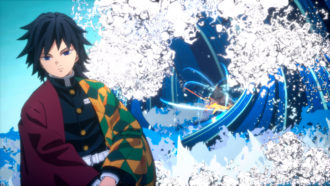 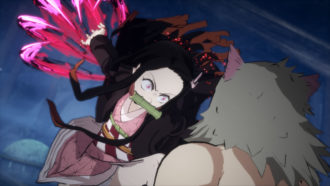 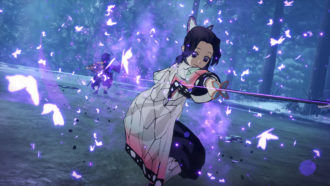 After learning all there is in the tutorial stage, you can start exploring a bit more. In Story Mode, you follow along with the events of the anime in an abridged fashion. Each chapter of the storyline you follow consists of linear mapped areas to explore, with the chance to encounter some surprise demon fights and boss fights at the end. In some cases, these areas were more of a walking simulation from one destination to another that seemed otherwise pointless. In others, it opened up more of the background world of Demon Slayer and new interactions that added a bit more depth to the game.

In each area, you’ll be able to find collectables to unlock certain features for Story and Arena Modes. “Kimetsu Points” can be collected to unlock reward panels and extras, while “Memory Fragments” can be collected to view small anime-still segments that narrate more of the story not shown in-game and characters’ pasts. All locations for these collectables become visible on the maps for each area, so there’s no real need or desire to keep a lookout for them along the way.

I feel the developers have missed a great opportunity to let players explore the world of Demon Slayer a bit more. There are indeed beautiful areas to wander through in the game, but there’s a real lack of anything substantial to do outside of storyline events. The only other interaction is some dialogue between NPCs. All up, the entirety of Story Mode takes about 10 hours to complete. It was a good deal of fun being able to face off against familiar demon enemies, but after it’s all said and done, Story Mode has no real replayable value.

I believe the real fun of Demon Slayer -Kimetsu No Yaiba- The Hinokami Chronicles lies within its Battle Mode. You have the choice of training battles against the CPU, local versus matches and online 2V2. Once you have gone through and unlocked all the playable characters from Story Mode, you have a lineup of 12 characters to choose from, with more soon to be released. You’re additionally able to customise your own Demon Slayer ID with screenshots and quotes from the anime, for other online players to view. This lets you show off your favourite moments.

The delay of online matches does stack onto the problem of the input delay already in gameplay. Things like the timed parry become all but impossible to achieve because of this issue. But the beauty of many arena combat games is you still have just as much of a chance at winning by button mashing as you do by executing perfect combo hits. If you’re lucky.

I leaned more into the local matches myself and had a much more enjoyable time. It’s a lot of fun getting to thrash a friend while playing as your favourite character. The Hinokami Chronicles has made itself accessible to newer gamers and still allowed room for the more seasoned player to spread out strategically. But the ones who are going to truly appreciate this game are the already established gamers of the Demon Slayer fandom.

Demon Slayer -Kimetsu No Yaiba- The Hinokami Chronicles is one for the fans, yet still accessible for beginners. Aside from a few functionality problems in gameplay, it is a great load of fun being able to fight against familiar faces and take the leading role in the story of Demon Slayer. The developers of the game may have missed a prime opportunity to expand on the exploration experience, but at the end of the day, this is a game focused on the thrill of battling against Demons and looking cool while doing so.