The Riftbreaker is a base-building, survival game with Action-RPG elements. You are an elite scientist/commando inside an advanced Mecha-Suit capable of dimensional rift travel. Hack & slash countless enemies. Build up your base, collect samples and research new inventions to survive.

I don’t know if The Riftbreaker knows what type of game it is. It seems to go through a constant switch and change between so many genres it’s like watching a child try to pick just one sweet from the candy store. At first, it looks like an RTS with its base building starting points, which quickly evolves into a tower defence, which then brings in RPG aspects with tech trees and upgrades, then comes the bullet hell and sci-fi fantasy storyline. And it isn’t even close to being able to describe the type of game that The Riftbreaker is. It doesn’t try to be everything and fail either, it IS all of these things in one sweet little package that, like the ways helicopters manage flight, The Riftbreaker is one cohesive game that deserves your time and attention. 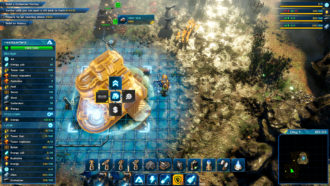 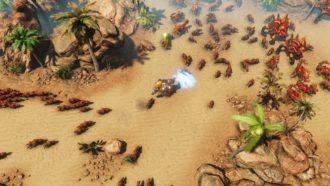 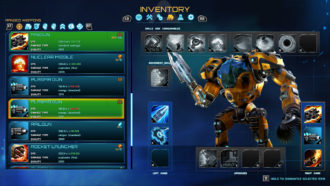 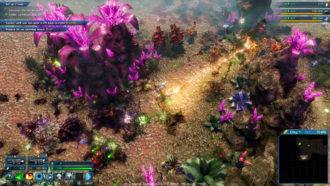 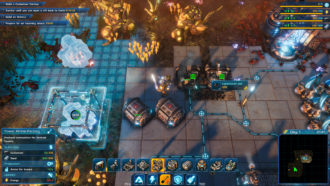 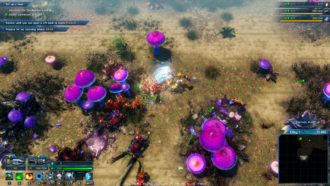 Let’s start at the beginning, shall we? After training in simulations you, Ashley S. Nowak, and your AI Mech suit Mr Riggs, are set down on a new planet in hopes of saving the human race by preparing the planet for colonization. Your end goal is to build the rift portal and allow for the colonists to arrive. To do this you must collect resources, base build, slaughter wildlife, drain resources from the ground, cut down trees and build walls and defences. Look, the irony wasn’t lost on me either. Ashley does pipe up a number of times wishing to not destroy another planet like Earth, but the AI is quick to counter that the survival of humanity is more important. Overall though, the banter between Ashely and Mr Riggs is enjoyable, not forced and adds that teeny bit of snark. I will say that Ashley is not ever treated poorly being a woman, which is a huge boon in my book. There isn’t even a love interest! Neat!

Resource management in Riftbreaker is unlike anything you’ve seen before in an RTS or base building game. Because it specifically doesn’t want you to wall yourself away and make one giant utopia. The resources are spread far and wide and you really cannot just stake out one area. I feel one of the biggest differences from other RTS I have played in the past is that the resources get eaten up so quickly. Take power, for example, early game, only 20 minutes in, and I have a FIELD of solar panels which only just covers the needs of 2 buildings and 2 extractors. Then I have to add defence turrets and 20 wind turbines seem to cover it pretty well. Sure, I can use a couple of coal-like energy producers, but that will eat precious metals that I need to build walls, buildings, and defence turrets. And that is while there is still coal-like metals to extract because even that is finite and can run out in a number of days.

I didn’t realise early on that the ability to teleport around the map using the Rifts. They are a structure you can place with power, and by using the map, move around the board instantly. This does help manage all the little outposts you end up all over the place. However, more outposts mean more defence, which means more power generation. It is a lot. The resource management is a little more chaotic than I am used to. Ok maybe a lot more. In fact, I found myself restarting the whole campaign voluntarily 5 hours in because I was running out of resources, space and patience. I will give it one credit though, they do refund you for buildings you sell. It isn’t abundantly clear if you get all, half, or part resources back, but you do get something. Mistakes can be fixed easily, and you will make many a mistake before you are through.

Speaking of mistakes, messing with the wildlife all willy-nilly is definitely a mistake to be made early on. You can choose to go slaughter wildlife early on, but it’s best not to get too trigger happy too quickly. Out in the wilderness, there are many different swarms of alien wildlife to encounter, from passive prey to giant rock-like boss monstrosities. Coming across these means instant death in the early days, and even later days if you aren’t prepared enough. When I say swarms, I mean swarms. Very rarely will there be a group of 10 or less milling about minding their own business. There can be 100’s of little ant-like alien friends ready to cart your carcass home for dinner. So be careful. Worth noting that ‘dying’ in Riftbreaker just respawns you at your main base. Thankfully you have a tech tree full of overwhelming choices for upgrades. Melee, ranged, offensive, defensive, it is all there. I am sure there are ways to min-max your experience by getting the best ‘build’ but I found I just grabbed what I needed when I needed it. It caters for a variety of playstyles and doesn’t limit the player. When you’ve progressed far enough into the story, you’ll need to start traversing to different biomes of the new planet for research and to gain more resources. This isn’t simply a ‘new map’ that you start in the campaign, it’s a living and ongoing management plan. You are now a CEO overlooking so many mining chains and outposts the difficulty becomes even greater! Did I say the resource management was chaotic yet?

“This puts all your strategy synapses in overdrive to keep on top of the chaos that is ensuing.”

Now I know you must be wondering: if it is so chaotic, why even try? Because it’s so rewarding. It’s constantly engaging. It’s never the same problem and never the same solution to fix said problem. This puts all your strategy synapses in overdrive to keep on top of the chaos that is ensuing. Many games have come out that uses this similar strategy. The games that try to push you to go as far as you can go before needing to start over. Like FrostPunk, Don’t Starve, They Are Billions and Darkest Dungeon. Except Riftbreaker is more forgiving in some ways. It allows you to continue, allows you to rebuild and refocus. Doesn’t punish you too harshly for mistakes and gently encourages you to move forward to complete your quest to save humanity. I don’t dislike it for that either. The game knows its difficulty curve is high but also acknowledges that it is a game to be challenged with but also enjoyed. For that, I’m pretty thankful.

Controlling Mr Riggs and subsequently Ashley inside, is fairly easy. Using mouse and keyboard is intuitive with letter keys being shortcuts for builds and mouse clicks for confirmations and killing. The biggest drawback to this is being stuck in a build menu while being rushed by aliens. So many times I’ve been in a panic to protect myself only to realise I’m a big idiot, and still in the build menu. This could just be my stupidity but seeing as I’m still making that mistake over 20 hours in I am going to go out on a limb and say that maybe there is a more intuitive way to do this.

Another gripe I guess I have is the lack of camera controls. There is exactly one view that you get throughout the game and that is zoomed out top-down slightly angled. There is no way to zoom in, which as someone with a giant monitor and poor eyesight, isn’t overly great for trying to see what is on the ground in front of me. I did find myself instinctively trying to zoom in at several points, only to be very disappointed. Maybe this is just a minor issue though and intended by the developers as part of the difficulty.

Another big issue that only comes during the late game is the sheer amount of alien swarms and particle effects that can cause performance issues. It was fixed easily enough by turning the graphic settings down, but worth mentioning that the screen does become a complete mess during later raids.

Overall The Riftbreaker is a chaotic mess that spans several genres and comes out as perfect as Grandma’s Christmas Trifle. It doesn’t make sense at all but it comes together so nicely and seamlessly, it gives the user a completely unique and challenging experience. Whether you are into tower defence, RTS or even bullet hell or hack & slash, The Riftbreaker is going to give you one hell of a wild ride, and you better hang on for dear life.