Shin Megami Tensei V Review – The demon in you

Shin Megami Tensei V, or SMTV for short, is the most high profile release the series has ever had, period. Up until now it has been one of those series that, while being popular in Japan, was still a niche interest here in the West. I am reminded of the massive success seen by Fire Emblem: Awakening, which brought the then-waning franchise into a worldwide spotlight that renewed interest in the Fire Emblem series for years to come. It feels as if this was ATLUS’ attempt at the same trick While I don’t think Shin Megami Tensei V is good enough to give ATLUS quite the same level of acclaim, it’s more than enough to pull in a brand new wave of Western fans to the series.

Like many people in the West, Shin Megami Tensei V marks my first foray into the SMT games. I didn’t know what to expect, beyond the vague notion that it was ‘kind of like Persona’ and that Jack Frost, ATLUS’ mascot, would show up at some point.

I was correct on both fronts. Shin Megami Tensei shares some themes and gameplay with Persona, but focuses far more on gameplay. The large majority of playtime is dedicated to exploration, turn-based combat, and the recruitment of demons. These demons will form the rest of your party, and can be levelled up and fused together to create new, more powerful ones.

I knew it wouldn’t focus so much on the story and characters — that was always Persona’s wheelhouse — but I wasn’t quite prepared for the way in which SMTV throws the protagonist right in the thick of it without much in the way of introduction. While some games will introduce each concept one by one to avoid confusing you, SMTV doesn’t seem to mind if you are confused or not. Without leaving you much time to process things, the game takes you from “You are a normal high school boy” to “Now you’re in the future where Tokyo is destroyed” to “You’ve been fused with a prototype demon, now you’ve been recruited in the war between angels and demons”. It doesn’t help that the protagonist seems utterly unconcerned with anything happening around him. This is becoming a common problem among silent protagonists: as graphical quality improves and character models become more detailed, it becomes very difficult to ignore the main character’s eerie, blank stare in the face of apocalyptic events.

The story in general is not as engaging as it could be, mostly due to its one-note characters with predictable story arcs. The game at least won me over by the end with a satisfying conclusion to the tale, but it was hampered by an opening half of unimpressive storytelling. To start with, the ‘angels vs devils’ plot feels overdone — although I accept that it was partly the Megami Tensei series that helped popularise that trope in video games. In places where the game would otherwise be able to implement a bit of background storytelling, it is too heavy-handed to be effective. In one example, a certain chapter focuses on one high school girl experiencing bullying. Suddenly, all the students in the school are talking about nothing else, leaving the player no room to imagine where the plot might go. It’s not the worst video game writing out there, but it’s the kind of mediocre that made me pull out my phone anytime a cutscene started playing. To its credit, the story gets good about halfway through, with a branching ending that I understand is a staple of the Megami Tensei series. 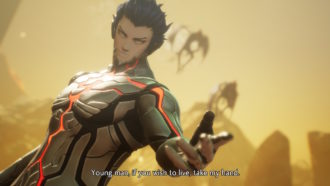 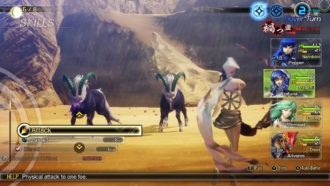 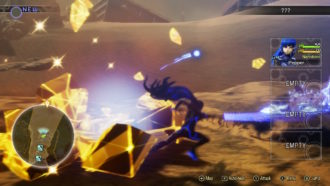 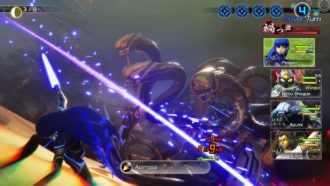 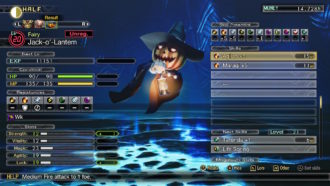 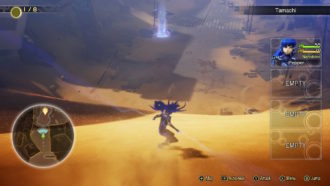 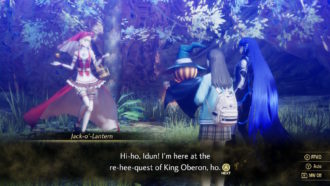 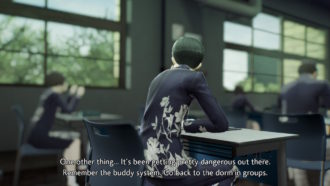 Luckily, it was easy to forget the story and focus on demon recruiting and combat, which is the meat and potatoes of the game anyway. I was perfectly happy spending hours exploring the destroyed Tokyo 20 years in the future, completing quests and finding items. The turn-based combat seems to have been as perfected as it can possibly be, having combined classic turn-based strategy with a system that rewards you with extra turns the longer you target your enemy’s weaknesses. I am usually not a fan of turn-based combat, but SMTV’s combat kept me engaged and rewarded right up until the end.

The Megami Tensei series is known for its difficulty, and SMTV continues this trend. As a series newbie, I knew I could never get anywhere on hard, but even normal mode offered such a great challenge that I ended up playing on casual mode, much to my embarrassment. Boss fights can be pretty crushing, and even the regular demons you can encounter in the world can kick your ass if you get caught on low HP or with the wrong party. No matter what difficulty you’re on, you’ll need to grind a bit to level up and think carefully about your party members.

What helps keep things fresh is the fusion of demons, which is necessary if you want to keep up with the increasing difficulty of enemies and bosses. Most enemy demons can be recruited at any time, provided you have enough space in your party, but you need to butter them up first. The recruitment conversations are fantastic and often hilarious, with each type of demon coming with a particular personality type that you’ll have to get a read on before you can reliably get one to consider joining you. Demons are often petty and a little nonsensical, so there are times there is no way to respond to them in a way they’ll like, but it all adds to the humour of trying to recruit this collection of ridiculous monsters.

Demon designs are excellent, drawing from all different kinds of mythology. Most of the demons are returning ones from previous titles, but have gotten redesigns to keep them looking fresh. The female demons unfortunately suffer from over-sexualisation, with the vast majority of them having the same skinny-yet-curvy body type and many of them wearing almost nothing, posing suggestively, or both. It’s not surprising, as such designs are still far too common in games, but frustrating to see nevertheless. The world looks gorgeous too, although it would have benefited from a few more varied landscapes. The desert sand of destroyed Tokyo begins to look the same after a while, which can lead to times navigating around by keeping your eyes locked to the minimap rather than the world itself.

The world looks slightly less nice in the Switch’s handheld mode, which leaves the game looking weirdly muddy. It’s still playable, but the game is clearly at its best in docked mode with the benefit of 1080p.

The Nintendo Switch was a strange choice of console for ATLUS to entrust with their beloved flagship title, and I don’t think it was the right one. These graphics would have looked incredible on a machine capable of 4K, but more importantly, the Switch seems to struggle slightly running the game. It’s nothing that ruins the experience, but the frame rate often dips below 30FPS, with occasional moments of lag when traversing the world. Even the pause screen lags for a brief moment.

Shin Megami Tensei V is sure to bring a large swath of fresh fans to the series with its beautiful graphics and complex turn-based strategy mechanics. It presents a challenge even on the easiest setting, and the demon recruitment process has been made all the better with livelier, more varied dialogue. Shin Megami Tensei V is only held back by some lacklustre storytelling in the first half, and the unfortunate performance on the Nintendo Switch, which was the wrong console to handle Shin Megami Tensei V’s powerful graphics.