Heavenly Bodies comes to us from the Melbourne-based company 2pt Interactive. In it, you play an astronaut/cosmonaut tasked with doing a multitude of things while in space. Meanwhile, you’ll need to move your limbs accurately and work on puzzles, or space will suck you out into the void. Heavenly Bodies promotes the fact that it’s about “the body and the absence of gravity”. Played in the third-person, you’ll have a great time yelling at the astronaut to move as you progress through the title either in single-player mode, local coop, or with Steam’s remote play functionality.

Physics games like Heave Ho, Getting Over It, or QWOP are hilarious to watch and play. Heavenly Bodies operates on a similar philosophy, the only difference is this time we’re in space. Characters have the same goals, whether that be opening doors, attaching cables, or more. You interact with the space around you by grabbing items, walls, or even your coop partner. The game is played best with a controller, with mapping available for the folks who’d want it.

One of the advantages Heavenly Bodies has over other physics games is its three control options. Turning on ‘Assisted’ controls mean that wherever your arms point to is where you’ll go. ‘Classic’ controls has a bit of a challenge but you won’t find accurate physics here. ‘Newtonian’ controls, the harder of the three, is what you’d choose if you want to challenge yourself. The difference between Assisted and Classic is minuscule in the long run. Initially, it’s a lot easier to use Assisted controls, though it didn’t stop things from being hard to learn. When playing you’ll find instances where simple tasks don’t go to plan. For instance, you may go to grab a rope but your character fails to do so, and so you’ll have to turn yourself around in zero gravity which takes forever. Other times your character moves in a certain way and gets its head or body wedged into a gap.

While annoying, the controls do have their charm. Sometimes it’s fun to drift off for a bit or hang onto something while in space. It’s like the movie Gravity (2013) except without the panic attacks. Meanwhile, for others who like to go fast, the game offers a speedrun timer. You can choose whether you want to time the game or the mission, so if you’re a speed junkie, this might be your calling. 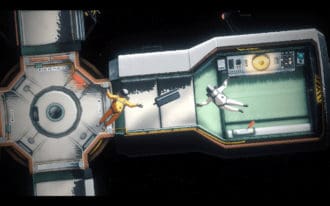 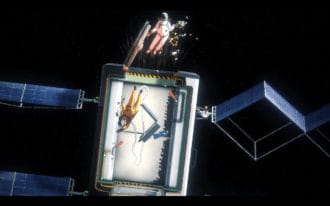 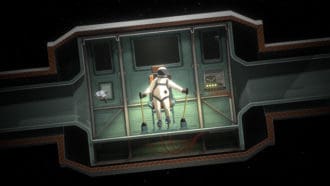 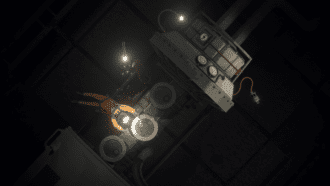 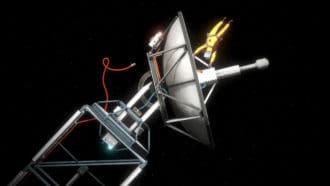 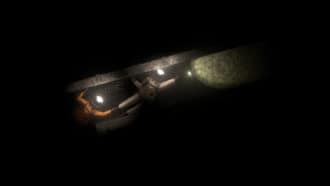 It’s easy to switch from single-player to local coop, even if you’re halfway done with a mission. It’s equally easy to drop out of multiplayer and back to single-player. There’s no ability (at the moment) for online coop, which is admittedly a bit of a shame. If these past two years have taught us anything, it’s that having online gaming can bring people together.

Playing Heavenly Bodies alone does make for some frustrating levels. Trying to get your character to move the way you want or trying to push a box and watching it get trapped. Even trying to figure out the puzzles and what their asking of you can be a little annoying. Yet, it is rewarding when you complete a level or even a small part of a mission that’s giving you grief. There’s a sense of accomplishment that comes with difficult games and sometimes you get to revel in it. Heavenly Bodies offers that for you. There’s also time to pause and breathe and think about your next movements, which is definitely nice.

When choosing coop mode, the change from one player to two doesn’t make the level any easier, though it’s always funnier to play in coop mode. A second player might enjoy sabotaging the first, whether that’s through holding onto your leg, blocking a passage, or pushing them in the wrong direction. Cooperative shenanigans provide mindless fun and it’s here where Heavenly Bodies can really shine. Coop gives you a chance to play the game and experience it in another way. When it comes to the puzzles, at least this time you’re putting two minds together rather than one. But even with that said, things can be somewhat difficult to complete.

Sometimes you’ll have to think about why a puzzle isn’t working and backtrack to where the problem is. Other times you know what it’s asking of you, but you can’t do it the way you want to.The best feeling is when you decide to do a task in an unconventional way and it works. For example, instead of picking out a piece of rock on an astroid, why don’t we drill into it and pull it out? Heavenly Bodies allows for that different kind of skill to thrive and it’s awesome to see. And heck, sometimes you’ve gotta roll with the different way you got there because any win is a win.

The explanations of mission directions can be good, but other times they aren’t. Knowing what the objective is and how to complete the objective can be two totally different things. Some players may appreciate that obfuscation of information, allowing them to learn by trial. But in some instances, a walkthrough or a more direct hint system would’ve been appreciated.

“…there’s a decent amount of accessibility functions from such a small team. It’s great to see them implemented.”

Accessibility options are available for players who might run into problems. This includes the movement style, as I mentioned earlier. Other options include enabling a toggle button to grab instead of hold and the option to allow the game to visualise what buttons to press if you hover over an item. You can also set case sensitive text instead of all caps. Lastly, in the left-hand corner, it’ll remind you to change the camera if your astronaut is upside down.

The only issue with the accessibility options is that the prompts and text is too small for large screens. Having the ability to change the size of some of the text would be an amazing addition with further patches. The text for the change camera reminder is big enough, but white text on a grey background can be hard to see. Regardless, there’s a decent amount of accessibility functions from such a small team. It’s great to see them implemented.

Heavenly Bodies’ 1970s aesthetic is “influenced by archival space photography and technical illustrations.” The strong aesthetics of the game makes it interesting and fun to look at, and it shows. The chapter menu is modelled after NASA’s Mission Operations Control Room, which is such a cool touch. The graphics are beautiful, especially with the use of film grain that lends itself to the 70s aesthetic. Some games tack it on as a trend, but it feels just right to be in a game like this.

There’s a tonne of attention to detail within, from the buttons to the inscription of smaller parts, along with what’s inside the boxes found within the space stations. 2pt Interactive has a real knack for environmental storytelling.

Heavenly Bodies’ music is of the synth-heavy genre. If you’re a fan of the music in Drive (2011), Escape From New York (1981) and The Social Network (2010) — or in gaming terms, Mass Effect (2007), Hotline Miami (2012) and Cyberpunk 2077 (2020) — then you will enjoy this one. Not only that but the sound design is creative. Whenever you’re within the space station you can hear every ding and dong, every clatter of an item. It kind of makes you think “wow, we really are alone right now, huh?” Could be a bit too existential if you’re that type of person.

While the game itself is styled well, it can admittedly be difficult to control which leads to frustration. There is no doubt some great potential in Heavenly Bodies. Most fans of the genre will have a laugh with friends or by themselves. If you enjoy games in the physics genre, then you’ll find another to love in Heavenly Bodies. But if you find that you get frustrated or annoyed easily, then maybe give this one a miss.

2pt Interactive’s first foray into the console and PC world is astounding for such a small team. Heavenly Bodies’ graphics, aesthetics, and sounds are beautiful. The introduction of different control modes is also great, with a clear and commendable focus on accessibility. The difficult-to-master controls is where players may find a challenge in engaging with the title, with unclear missions adding to the disorderly feeling. While short, the game is replayable enough with different coop partners and challenges. Consider jumping in with a friend, because cooperative fun can help camouflage some of the game’s rougher edges.