Jimmy Hawkins, the protagonist of hack n’ slash sci-fi platformer Blackwind just can’t catch a break. The teen is just cruising around on a spaceship with his Dad and WHAMMY – they are attacked, and the ship goes down. Luckily for him, Hawkins’ was inside his father’s newest prototype armour, the Battle Frame, so when he lands he was fine and dandy, but his Dad? Well Hawkins is going to have to find him. That’s not all the bad news for Jimmy however, as the planet he’s crashed onto, Medusa-42, a seemingly boring mining colony, is now overrun by aliens called the Raknos. I’ll give you one guess as to who is soon tasked to save the day.

To save both the world and his Dad, Hawkins needs to deep dive into Medusa-42 which consists of sandy exteriors and futuristic science lab interiors. You have to kill all the aliens and unlock every door that will lead him one step closer to finding his father. Combat is a mixture of hack n’ slash and shooter. You can pew pew stuff to smithereens via guns which shoot out pretty blue electric rays. while the hacking and slashing is done via energy blades that shine bright like a diamond and cut through alien guts and also lots of breakable objects found throughout the world. Doing all of this rewards you with XP, that can be used to upgrade your suit and abilities at certain stations throughout the world’s interior.

I found the pulverising of objects such as lab equipment and big TV screens didn’t quite fit in with the vibes of the story. Sure, it makes sense to slash through cannisters and alien goo, but not objects that would be of importance to this crumbling colony. It makes it even more unsettling when soldiers are just standing around watching you slice and dice up the objects in their home like Hawkins is a Teppanyaki chef. Like, I don’t know about you, but if I was one of those soldiers, I’d want to put that inconsiderate teen in a headlock and make sure he didn’t smash up millions of dollars of equipment ever again – I wouldn’t care who his father was!

The combat itself however is pretty satisfying, especially when one of the aliens flashes red, meaning you can perform a finisher on them. My favourite finisher would have to be when Hawkins rips the long, skinny robotic arms off the aliens and then flings them sharply into their chest. However, the downside to these moves is the catchphrases Hawkins uses are pretty repetitive and very cringe. Unfortunately, the majority of the dialogue did make me squirm, mainly due to the poor voice acting. It sounds as if the actors were reading the script with a full-stop after each word. So. Very. Disjointed. And. Therefore. Unnatural. And. Awkward. Sounding.

Blackwind unfortunately suffers from a lot of repetitive elements that make the world seem… well… copied and pasted. Navigating throughout Medusa-42 gave me serious Déjà Vu; was I walking around in circles, or did everything just look really similar? The music follows this same repetitive fashion, looping the same few chords over and over, making me have to mute the sound as it just got to the point of driving me a tad stir crazy. Another annoying element is the lack of camera scope and the inability to adjust it. This is the most frustrating when in combat; though the trusty AI on your battle armour does in fact warn you that “Enemies (are) approaching”, you cannot see what flavour of enemy or how many are about to attack.  Seeing as some of them are these little fast moving grenade-like beetles that attack in groups and blow up when near you, not knowing their approaching can lead to a frustrating death.

It also doesn’t help that a lot of the time the controls lagged a bit, which meant that I had moments where I was pressing in a combo, but I died before Hawkins actually understood what to do. Again, another frustrating way to die. The game’s graphics as well seemed like they needed some extra polishing with edges and finer artwork being blurry. The game also totes itself to have puzzle elements, which it does but these are quite rare. The puzzles are a welcome break from the combat and how-do-I-open-this-door gameplay, although they aren’t especially head-scratching in nature. I don’t want to be stuck in an area forever but I also don’t want to breeze through without having my brain tickled a bit.

Blackwind does have some redeeming qualities, however; one of the main ones being the way the game slowly introduces new elements, which keeps gameplay interesting throughout. One of these is the Battle Frame Drone, a tiny vehicle that looks like if you soaked it in water it would enlarge to look like the Millennium Falcon. Hawkins can smash through airducts and use the drone to make its way through the winding ducts, opening sealed areas. The drone even fires bullets so it can take down any Raknos in its path if needed. 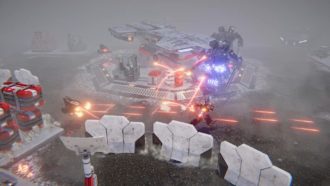 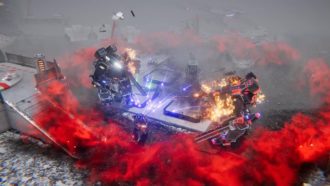 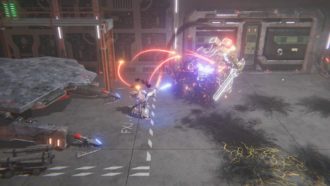 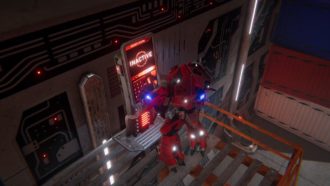 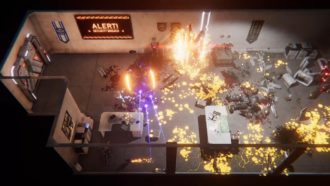 As mentioned previously, combat is a lot of fun, especially with those shiny electric blade arms that you slash enemies up with. You can even find cosmetic upgrades throughout the game’s world which change the glow of your blades along with your armour’s colour. As pretty these cosmetics may be, it doesn’t save the game from having more frustrating qualities than good, which makes it feel pretty forgettable in what is usually an action-packed genre.

Blackwind presents a sci-fi platforming world that is fun to smash through and fly around its desolate landscapes. However, it sticks with its formula of killing enemies and unlocking areas so tightly that it lacks spontaneity and becomes too predictable too fast. Repetitive music, awkward dialogue and unvaried landscapes all lead to a pretty lackluster experience that even the fun combat can’t fix. Blackwind needs more time taking risks and experimenting with the very versatile genres it encompasses in order for it to stand out amongst the crowded population of action games.