For the fans of Wipeout, there’s a new kid on the block. Gravity Chase is a futuristic anti-gravity arcade racer where flashy lights and going fast is everything you need. Hovering at incredible speeds, this game introduces 360-degree, zero gravity tracks to add flair to each race but doesn’t do enough to stand on the podium with the best.

This game gets straight to the chase, with no real story or campaign besides playing each track and achieving enough points to unlock the next. Gravity Chase offers 16 tracks throughout multiple environments and types. While they all provide a different world to race through, it doesn’t take long to essentially complete the game and unlock all the content on offer. If you’re someone who needs a goal to progress, there won’t be much here for you.

You’ll be racing through jungles in a half-pipe, volcanic worlds on a gravity-magnet cylinder, or through neon cities within a transparent tube. There’s plenty of variety and the tracks have exciting settings to race by. However, the neon lights can be a burden with an excessive amount of bright, blurry beams. The art, ships, and HUD will often get lost in the neon mess. Cool ideas, but sometimes too much going on.

“If you’re someone who needs a goal to progress, there won’t be much here for you.”

Actually racing in Gravity Chase is fantastic. Regardless of which ship you pick, they feel light and nimble with a whole heap of turbocharged speed. Each race makes you feel like a powertrain on a long straight track, no matter how many twists and turns there are. Racing across the several types of anti-gravity surfaces adds to the energy of each lap, trying to find the apex route and set the best time.

On each track are blue boost pads and slow red pads. As with other similar racers, nailing a combo line of boosts across a lap or an entire race is a tremendous feeling. The flat spot is that these pads aren’t always well distributed across tracks. Sometimes they are lined up in logical positions; other times they are almost randomly placed across the race. It’s a bit of a drag when the next boost pad is awkwardly placed on the opposite side of the cylindrical track.

There are three available game modes to shake things up a bit. You’ll mainly be playing the traditional Arcade Race, fighting for the first position against AI. Combat Race has a similar goal, except ships can pick up stock standard weapons to shoot down opponents. Finally, Eliminator Race forces players to stay ahead, with the last place ship removed every 30 seconds. While these modes are fun and add variety, they aren’t unique or inventive. 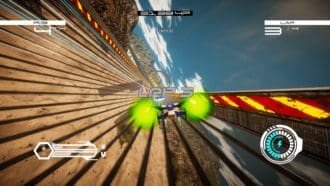 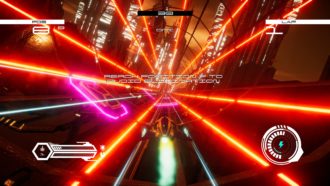 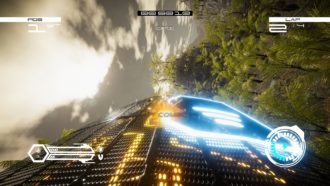 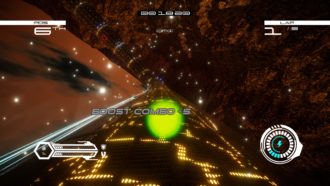 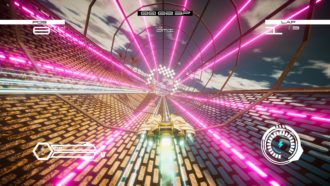 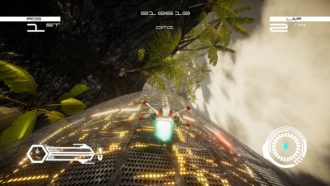 Unfortunately, the ships themselves lack creativity, too. With ten ships to choose from, broken down into what is assumingly weight classes but isn’t explicitly defined in the game, each can be upgraded to better their speed, acceleration, handling, and strength. The customisation comes down to a colour palette swap—and that’s really it. The setting for anti-gravity racers has so much potential for modifications and a futuristic style that feels underutilised in Gravity Chase.

Audio is essential in any racer and music is particularly crucial in arcade racers. The hovering sounds of the ships complement the intense speeds, but everything else feels slightly flat. The tiny blips from pickups and muffled boost effects are awfully underwhelming. The music is also hit and miss, a few tracks nailing the high-tempo techno and electronica while others are short and often repeat multiple times in a quick five-minute race.

Developed by a micro-indie studio in the UK, Repixel8 are experienced with making racers. Their previous projects, Velocity G and Formula Retro Racing, both released to mixed reviews. The consensus for both is the lack of something interesting or unique to define these games as anything besides baseline racers. They’re good, functional games but won’t keep your interest for long. Gravity Chase feels largely the game, with the game even adapting the 360-degree racing from Velocity G, only really innovating by inversing the tracks.

Gravity Chase is not the most ambitious or creative racing game, but it offers a competent and fast futuristic racer. With a decent variety of tracks that are all easy to unlock, three game modes to pick from, and a satisfactory roster of ships and music to race with—there’s a handful of fun in this package.