I miss scratching dogs on their butts. My German Shepherd Rudy used to pry my legs apart with his nose so he could walk halfway between them and wait patiently for me to put down whatever I was holding and scratch his big fluffy posterior. After the Rude Dude crossed the rainbow bridge, I was sad to find that buttscratching wasn’t a universal thing all dogs enjoyed. I tried it on my friends’ dogs, and they did not care for it. Neither did my friends.

Pupperazzi lets me virtually relive my unusually specific whims. It’s a first-person photography game in which you run and jump around small, detailed locations to take photos of dogs. You have access to a large unlockable array of toys and objects to play with the doggos, and you can pat them so they briefly follow you around before they inevitably get bored, but every interaction with them only serves to set up a perfect shot. Developer Sundae Month has made a cartoonish, nonsensical world, but I get to scratch every dog on the butt as much as I want, so I’m not complaining. Pupperazzi is a breezy, lighthearted adventure made for fans of dogs. It’s like a playable TikTok compilation video.

There isn’t much setup or story, but the game is straightforward enough for you to understand everything from the outset. You begin at a beach filled with a dozen or so wandering dogs, where a puppy in a raincoat gives you a quick tutorial before you’re completely free to explore. You quickly learn as you unlock more levels (a pier, a city block, and so on) that this is a world populated almost entirely by dogs. Some give you objectives to complete, but most exist simply to be played with. Their behaviour is somehow both realistic and completely wild. If you throw a frisbee, they will chase it. If they see a Roomba, they will freeze in terror. But then you’ll see a dog casually riding a scooter, or doing sick skate tricks (with safety gear on, of course). In one location I climbed a large tree to find a borzoi on top, chilling. Pupperazzi is a peaceful game, but these dogs’ AI leads them into surprising, hilarious antics.

Objectives are the primary progression method. Through a menu, you will receive instructions on specific photos to take. One character might want a photo in black and white, while another might want a portrait of a specific breed or location. As you complete objectives, you are given fictional social media followers and currency to upgrade your camera and buy new gear with which to complete new objectives. A single objective takes a few minutes at most to complete, so it’s easy to fall into a loop of taking photos to complete them, sometimes accidentally completing multiple objectives with a single photo. Most objectives are simple, but a few later on are intriguingly obscure. Whilst each level is relatively small, the game still manages to hide important things, which means you might find yourself running around in circles trying to figure out what you’re supposed to do. But you can always pursue other objectives and return to them later.

You can receive more followers by submitting photos you’ve taken to “DogNet”, complete with ridiculous comments by anonymous users on specific details in each shot. You can save any photos you take to your hard drive if you’ve got the space to handle it, which I took every advantage of. Interestingly, Pupperazzi limits how many photos you can take at once, and how many times you can upload to DogNet. Too many uploads and commenters will complain, meaning you will cease to gain followers until you come back later.

These elements diminish and eventually disappear by buying upgrades, but it’s an early hint that Pupperazzi is best played in short bursts. I finished most objectives in every level in under 4 hours, so it’s conceivably easy to 100% the game in one sitting, but that’s not the point of Pupperazzi. The point, and the joy, comes from unlocking and expanding this sandbox to its fullest, then rolling around in it.

There are only five levels, but each has four unlockable states, such as different times of day or weather effects. Each state changes dog behaviour and objectives, so there’s plenty of variety on offer. There’s never any time limits or failures, and you are free to be creative while fulfilling the criteria of each request. Pupperazzi wants you to take your time and relax. And helping you achieve this are some extremely powerful movement abilities.

Despite playing a giant camera with legs (something that is never explained, and never needs to be), you are given a mighty double jump and infinite sprint that lets you bound across maps in seconds, much like when a dog gets the zoomies. The controls are clunky yet satisfying, letting you overshoot jumps that feel out of reach, and the verticality in each level gives you many opportunities to platform around. You could climb a fire escape to reach the top of an apartment building, but bouncing on a nearby umbrella might get you there faster. 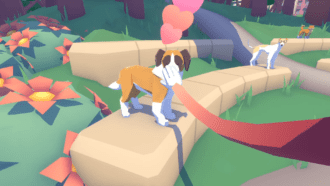 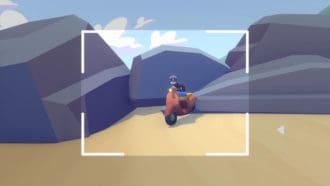 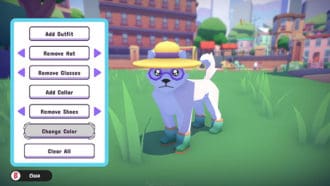 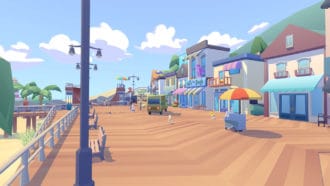 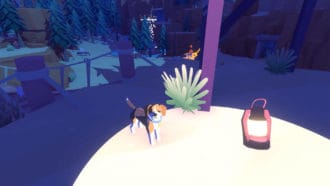 If something looks climbable, it probably is, and Pupperazzi sometimes rewards you by putting something up there to find (I once spotted four dogs wearing sunglasses sitting around a table, like an all-dog reboot of Sex and the City, something I hope never to see in real life). However, there were several times when I accidentally parkoured out of a level’s bounds, and saw unfinished assets I clearly wasn’t meant to see. It’s not a pretty sight when this occurs, but it didn’t break or interrupt my game, and if anything it only accentuates Pupperazzi’s frenetic, dog-like energy, as unintended as it may be.

Pupperazzi isn’t difficult or cerebral. This photography simulator doesn’t have the budget or serenity that other games in the genre might provide, but handily makes up for it with charm, personality, and hundreds of dogs being big goofballs. Even playing the same level multiple times will give you a random assortment of dogs and toys to mess around with, so the game doesn’t grow stale easily. It’s a fantastic example of a video game letting you live out a simple real-life fantasy: walking around without a care in the world, taking photos of endless dogs, and their fluffy, scratchable butts.