While it’s been a while since a lot of us have spent any time in an arcade, Windjammers 2 is bringing the experience home with a single aerodynamic lob shot. It’s a sequel to the acclaimed Windjammers and it’s bringing back the stylized flying disc game with a fresh coat of paint. For a game that looks simple, there’s actually quite a lot of skill involved. It’s a juiced-up air hockey match, though that’s putting it mildly when the matches are as fast-paced as they are in the Windjammers series. Every throw of the frisbee is a new challenge and the opponents in this game are more than ready to take you on!

Windjammers was originally released in 1994 on the Neo Geo System. For those unfamiliar with arcade machines, this was a model common through the 90s that retailed for $900 AUD. The first Windjammers game has since been ported to PlayStation 4, PlayStation Vita, and Nintendo Switch, so it’s really surprising that this game hasn’t been given the sequel treatment sooner.

Windjammers 2 is basically a tennis game flipped on its head. There’s no rackets or tennis balls though, just a single frisbee between you and your opponent as you serve and volley until you either drop the disk, or it hits one of the goals at each end of the court. It’s quite straightforward and yet the challenge is what really keeps things interesting. There’s also an ace lineup of special moves and a power-up system that helps players get the edge against each other on the court.

When you jump in you’re able to hop straight online in multiplayer matches, otherwise you can practice in the Arcade, or jump into Versus mode with friends or against the CPU. The Arcade mode feels very sincere, packing plenty of challenges into the iconic format. There are also 10 characters with varying stats to try out and see who suits your play style best. Each has a different power-up that can almost always be a sure goal when timed correctly.

From the moment you boot up Windjammers 2, the nostalgia beams from it like a relic to its roots. The coy flash of the “Press Any Button” on the main menu could very well read “Insert Coin” instead if you weren’t paying attention. Windjammers 2 is exactly what I’d expect for a sequel to an arcade game. The developers have been really careful not to go too far in how they updated the original game format and it feels very now with just enough taste of the past. The game keeps its hyper colour palette, giving it that iconic arcade pop of nostalgia and vintage glory.

Chances are most of us have at some point or another played a tennis/air hockey-style game, so this should feel quite familiar. What I do appreciate about Windjammers though is that it feels like more of a fighting game. From the stylized serves, the insane power moves, and the way the intensity increases in the games the longer you volley the flying disc between each other – it all adds to the adrenaline in the match. There’s also nothing worse than losing a long-running battle that you fought tooth and frisbee for. The game certainly has a pedigree for being an arcade gem. It’s very easy to pick up even as a new player without knowledge of all the special moves. This was my first hands-on experience with the series and honestly, I can only wish I’d gotten to play it sooner.

Not only does it play well, but the game’s soundtrack is such a high-energy blast, perfect for an arcade game. It’s too easy to feel like you’re standing in the arcade as it plays during the matches and on the menu screens. It complements the intensity of the game quite well. Each different arena has a complimentary backing track. I think my favourite was the one that accompanied the RING arena as it sounds like a guitar solo. The CASINO map’s track is also a banger. All the different tracks help make Windjammers 2 this pure trip of arcade wonder that I think will be appreciated by both new and returning players.

I have to say that the multiplayer section of the game brings even more nostalgia. It pairs you with another player and you jump in, picking characters and the arena you’ll vs each other on. When the match is over both players have the option to keep playing together or separate and begin matchmaking again. I love this style of play as it feels like you are both playing on the same machine in the arcade though it’s definitely missing that banter you’d have with a person next to you. The player is also at the whims of matchmaking. Multiple times I ended up playing the same person which became quite annoying, especially if they weren’t participating or had poor internet. It does feel like (at least on console) there aren’t too many people playing, which no doubt makes matchmaking more limited.

Jump in with a friend on voice chat and you’re sure to have a blast. I even think this can be considered one of those rare games that’s still fun, even when you’re getting totally trounced by your opponent. Though there’s only so long before you’ll begin to feel a little tilted at the difficulty and skill required.

The only thing I would’ve liked to see in the game, considering it’s no longer based in its arcade roots, would’ve been a more structured tournament mode. Something allowing players to choose one character and go up against a league, with the challenge gradually increasing as players burn closer to the grand final. Windjammers 2 wants you to view it as an arcade game like its predecessor, but now that it’s available for download, I believe there’s still room to add more to this sequel while also not overstepping the original.

Other tennis games like Mario Tennis, for instance, include the tournament format as a way of increasing the stakes while Windjammers 2 foregoes the tournament structure in favour of a less rewarding game style. In the Arcade mode, players gradually unlock the different courts, but it’s just a single match against a CPU before you’re allowed access to the next court. While opening Arcade mode it does say “Welcome to The Windjammers Championship”, but it’s missing that grandiose nature of a devoted tournament style mode. 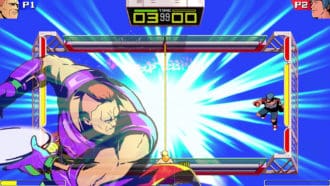 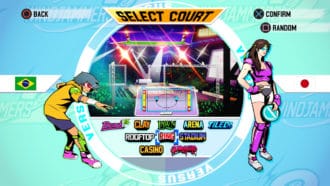 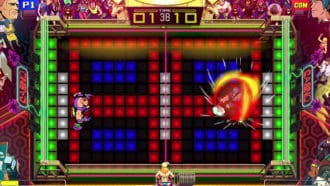 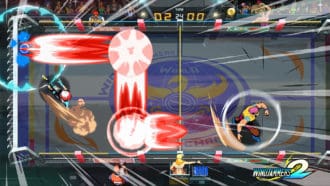 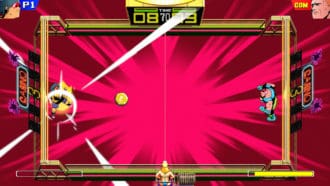 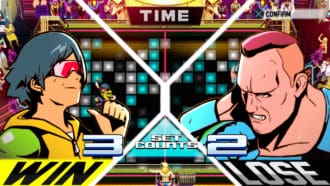 I also found the ‘How To Play’ section on the menu rather flat and shouldered to the side. The game chooses to show you the controls without actually allowing you to try it out for yourself. By the time you get to the arena, you might still remember how to do a drop shot and maybe a slap shot if you were really paying attention, but you’ll forget a lot more. Mastering Windjammers requires effort and perseverance that not even a playable tutorial can give you, but having no such option feels like a mistake. I guess if this was still the 90s we’d be playing Windjammers in the Arcade with a pocket full of coins and the game’s moves and controls printed on the outside of the machine. This may be hard to replicate today, but I honestly would’ve appreciated a more meaningful attempt at showing players the basics and then the more sophisticated moves.

Windjammers 2 is definitely a stylistic update upon the original game’s legacy, though it admittedly doesn’t appear too eager to push the benchmark originally set. That said, it’s a fun time to be had and it will reward players that persevere and master all it has to offer. Windjammers 2 is a must for fans of the original, but also fans of games that feel plucked straight out of the old-school coin arcade. Turn the RGB lights on and blast that soundtrack and you’ll feel like you’ve stepped back in time.

Windjammers 2 is a great update to a nostalgic arcade wonder that many will welcome with open arms, just like they would a frisbee. Definitely take this one for a spin if you love air hockey-style games but crave that bit of extra button mashing. The characters, arenas, and soundtrack all hit the mark brilliantly. It’s not an easy game to master, allowing dedicated fans to hone their skills and improve. There’s a missed opportunity for better tutorialisation and a lack of a structured tournament/career mode is disappointing, though the game overall still feels like a nostalgic romp.