Not For Broadcast Review – No news is good news

It’s thirty seconds ‘til you’re live. Electric sparks dance across your control desk, threatening to eviscerate your trembling fingers as they swat at buttons and fumble with dials. You frantically load up tonight’s political advertisement tapes while a voice over your tinny headphones delivers the juicy gossip that the anchor has brutally sacked yet another assistant. Five seconds. Cue the applause track, press go, breathe. Time for the news – but make sure you’re on top of what’s Not For Broadcast.

A unique twist on the ethical management sim genre (made popular by titles like Papers, Please and This War of Mine), Not For Broadcast is an ambitious, satirical, savage take on the morality of media producers. Boasting more than 40 hours of video footage, the title places players in the control room of a news program during a series of extreme political moments in an alternative 1980s United Kingdom. With killer writing and a tone that swings pendulously between camp slapstick and dystopian horror, Not For Broadcast’s leap out of Early Access is certain to make a mark.

Not For Broadcast is a game about manipulating the news media to tell the story you want, while juggling the practicalities and implications of working in a television studio. Equal parts management sim and narrative adventure, the title begins by guiding the player through editing their first live news broadcast. The opening segments document the far-left Advance party winning a national election on a radical platform of wealth redistribution and equality, setting up the crux of the main plot. Everything happens against the backdrop of Advance’s extreme reforms, which become gradually more dystopian and incite the wrath of violently reactive terrorist group Disrupt. You experience the story through a series of broadcasts over years, documenting snapshots of Advance’s reign. The decisions you make in the broadcast studio determine the public’s perception of Advance, as well as their overall political effectiveness. You can promote them or mock them, with all of your actions having far-reaching implications over time.

The bulk of the gameplay is set in the studio, where you’ll edit the live news feed. A meter at the top of the screen displays how happy the network’s viewers are with your current editing and a timer counts down to the next ad break. You receive a letter grade indicating your performance in each section, with the option to replay segments for a higher score – the better you perform, the more likely you are to receive financial bonuses that can alter your narrative options. The controller’s face buttons determine which of the four video feeds will be displayed to the network at any given time, while other parts of the studio need to be managed simultaneously. There’s a dedicated button to censor any swearing you might hear in the studio feed before it goes to air after a two second delay, and occasional radio interference needs to be managed via a tricky little wave-form minigame.

As events progress, other mechanics interrupt broadcasts to add further challenge – a thunderstorm electrifies parts of the studio making them unusable, a heatwave necessitates cooling parts of the studio’s generator with a fan, and during one particularly memorable broadcast, hordes of murderous children’s toys must be beaten into submission. These challenges combine to create a uniquely stressful experience, since you’ll be dealing with them while also paying attention to what’s happening on-screen and trying to keep your viewers happy. More than once I had to wipe down my controller after a segment to deal with the sweaty mess I had created.

In between broadcasts, time advances through text-based vignettes that deal with the player’s family life. Your family have vastly different opinions on global events, which usually leads to some sort of heart-wrenching binary choice. While the nuance here often boils down to “do you euthanise your mother to save on your bills or not?”, the choices influence the narrative and affect your relationships when you return to the broadcast room. These scenes are a neat complement to the frantic gameplay and help to bring the overarching political climate into the personal sphere, grounding some of the more extreme events in reality. This, combined with your in-studio choices of adverts, censorship, and timing, leads to an intense and often challenging sense of personal responsibility for the narrative outcomes.

Most of the game’s themes are explored through news anchors Megan and Jeremy, who tie each television segment together and provide context for all of the wacky shenanigans unfolding. Megan is an emerging star presenter with ambition, drive, and optimism, while Jeremy is a well-established and jaded veteran. The pair are masterfully played by Paul Baverstock and Andrea Valls, both bringing nuance, dry humour, and emotional depth to what could otherwise have been simple player self-inserts. Overall the cast’s performances are top-notch, with some wonderfully cringey comic timing and even a beautiful musical number from Valls.

Despite a lengthy period of Early Access, there are a few bugs yet to be sorted out in the release version, including a heart-breaking infinite loading glitch that ended my playthrough just before the final broadcast. Thankfully, the developers included some completed save files for review so that I was able to see one of the endings, but with dozens of choices affecting which of the multiple finales you’ll experience, it wasn’t quite the same. That said, the wealth of content on offer cannot be understated. You’ve got the option to re-watch any of the broadcasts with full playback controls, meaning you can go back and listen to side conversations or relive moments when you may have been distracted by interruptions. There’s also a series of challenge modes and an extra ‘bonus’ broadcast challenge.

While the aggressive political commentary and biting satire tickled me, Not For Broadcast is definitely not an exercise in escapism. Since its Early Access release in January 2020, the development team worked on the title throughout lockdowns and political unrest. This is reflected in so much of the game’s content. One of the in-game broadcasts is set during a lockdown, and the sense of despair and futility emanating from the actors could be a bit too real for any players still coming to terms with the past few years. However, if you’ve got the stomach for it, Not For Broadcast offers a unique and engaging way to experience a confronting, powerful narrative that will stay with you long after you’ve wiped down your sweat-stained controller. 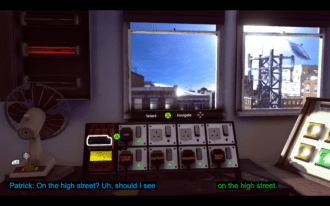 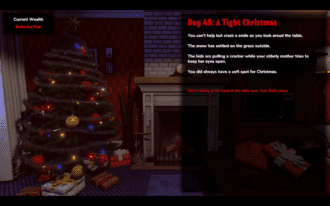 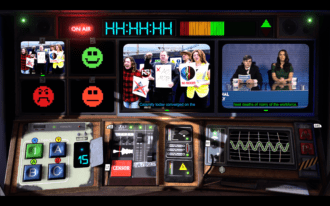 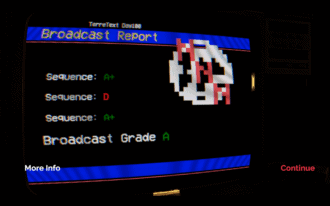 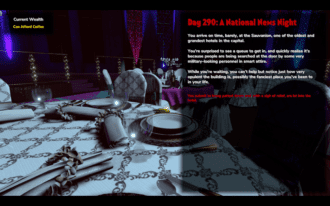 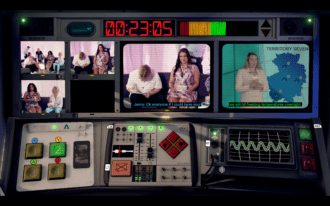 Not For Broadcast ambitiously challenges the player to reconsider their ethical framework, political values, and personal loyalties through its incredibly clever combination of stressful management sim gameplay and acid-tongued writing. It’s not for the faint of heart, but balances its dystopian terrors with biting satire. With exceptional performances from its cast, a unique and varied system of mechanics that changes with each broadcast, and tonnes of extra story content, any budding media mogul will be both delighted and horrified with all that Not For Broadcast has to offer.