Babylon’s Fall Review – How the mighty have fallen

As I write this, I am shaking my head. Not in disbelief, but in the bitter realisation that everyone was right. All the signs were there: Babylon’s Fall is going to flop… and it really cannot be understated how hard it flopped. Babylon’s Fall is categorically one of the most disappointing games of the generation so far, and I would posit that it will end up on many “Worst of the Generation” lists. From ham-fisted live service integration, a bland and meandering plot, and visuals that would make 2003’s Morrowind look like a Picasso masterpiece, Babylon’s Fall fails to deliver on almost every front. From the same pairing that brought us Nier Automata, we’ve been given a bloated, messy, uninspired disaster that is, in my opinion, a sign of true desperation from Platinum Games and Square Enix.

For the uninitiated, Babylon’s Fall is a games-as-a-service take on Platinum Games’ critically acclaimed frantic action combat. Using an interface inspired by games such as Destiny and Outriders, players assume the role of a ‘Sentinal’, a slave-soldier of the Empire, and are tasked with conquering the ancient Tower of Babel and plunder its fabled treasures. Sentinals are heavily armed weapons of war, and thanks to the ‘Gideon Coffin’ grafted to each one’s back, the Sentinal’s arsenal is expanded with two spectral weapons which add more firepower for the player to utilise.

It is hard to decide where to start when discussing Babylon’s Fall. I think in this case it may be easier to share what I liked about the game, before getting mired in the many issues I found with it. On a pure gameplay basis, Babylon’s Fall feels like it was developed by Platinum Games, with button-mashing combos with flashing weapon animations. The glitz and glam on display when in the throes of combat temporarily improves the bland scenery that is the space you play in.

“…trying different combinations of swords, wands, bows, and hammers to build your character’s loadout is actually quite enjoyable.”

The weapon effects look impressive, and trying different combinations of swords, wands, bows, and hammers to build your character’s loadout is actually quite enjoyable. Different types of attacks are bound to different inputs, and depending on which weapon you have equipped there will be a different result. From massive AoE slams from a hammer, to flurries of slashing attacks from swords, or a passive healing effect from wands, there is a fair level of diversity and experimentation available for those willing to sift through the literal hundreds of weapons you’ll obtain during missions. Unfortunately, that is just about where the positives end.

Each mission is broken into chapters, which are segmented as combat encounters. A strange approach, but it is what it is. At the end of each, you are given a summary and score based on your efforts. I won’t lie to you: I found these scores and accolades to be a whole bunch of white noise which is all too common in live service games. Numbers, awards, badges, titles… in the end it just feels like content for content’s sake and I feel it takes away from what could have been, at least, a half-decent gameplay loop.

It is with this in mind that I come to one of my many conclusions about this game: Babylon’s Fall should have been a single-player action RPG. It may not have ever had a snowball’s chance in hell to reach the heights of other Platinum Games’ titles like Astral Chain, Metal Gear Rising, or the aforementioned Nier Automata, but it could have been an acceptable effort. Instead, somewhere along the way, someone decided a live service platform was the way to go. Oh, how wrong they were.

Almost immediately after starting the game, the player is assaulted with prompts for battle passes, premium currencies, legendary gear… all the trappings of a live service cash grab title. I found it somewhat ironic; knowing that Babylon’s Fall was essentially dead on arrival whilst I was being almost begged to give money to the game and become ingratiated into the ecosystem. Sorry, Square Enix, this ain’t it chief. 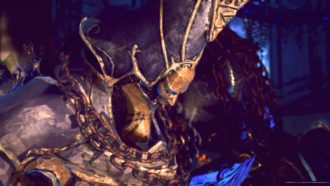 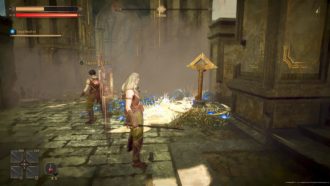 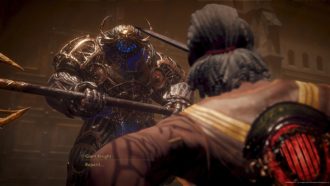 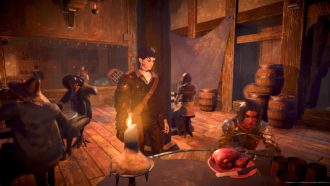 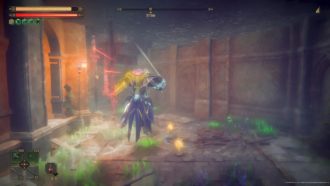 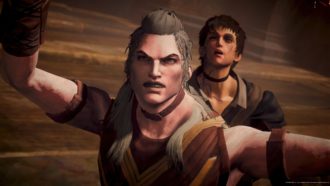 The graphical quality is just so far below what would be considered acceptable for a AAA studio, I almost don’t know what to say. From the get-go, everything looks like it was made over a decade ago, and would give Telltale a run for its money for sharp, jagged edges and wicked artefacts littering the visual landscape. Many times I wanted to get up and give my TV a clean because the entire game feels like it’s blurred out. This is most likely a deliberate stylistic choice; one could see how Platinum Games thought bringing an ancient legend of Babylon to the screen and making it look like an old animated painting could be cool. Unfortunately, the execution is just so far off the mark, it ends up looking like someone spilled tea across the game’s graphical environment.

It is also clear that Square Enix hasn’t provided a stable enough framework for Babylon’s Fall to exist as a live service game. Over half the times I was able to hype myself up for another round of punishment, the servers were down. When I was able to join and play, I found great difficulty connecting with others to play the game in co-op. I can definitively say this isn’t an Australian internet issue either, as even my housemate in the same house had struggles connecting to play in the same game as me.

My next issue with the game-as-a-service model for Babylon’s Fall: the menus make no sense. I felt like I had to study a full undergraduate degree just to be able to navigate the menus in order to join up with my friends to play. There is no party support, no social menus, no “invite to game” function. While it’s clear Square Enix saw the success of Destiny and the like and wanted a piece of the pie, they did a miserable job implementing any sort of ease-of-access.

I feel it is easier to just briefly touch on some of the other criticisms that stood out during the opening hours of Babylon’s Fall. The voice acting is on another level of cringe, the onboarding and guidance given are next to nothing, and the side characters are hollow and often annoying. There is also no explanations or tutorials for any of the game’s mechanics or features, with trial and error and blind experimentation the only way to somewhat figure out what to do. With such a sharp and obtuse barrier of entry for a game that desperately needs players to survive, this is almost unforgivable.

Babylon’s Fall may just be one of the worst games I’ve played in my time reviewing games. I remember being so excited that Square Enix and Platinum games were teaming up once again, and to come to the game’s release and be this disappointed is genuinely upsetting. You would be forgiven for having grave concerns for both Square and Platinum; both companies have experienced some bitter disappointments in recent years (looking at you, Scalebound and The Avengers), but Babylon’s Fall is truly a failure of biblical proportions.

From a dismal effort on the front of graphics, user interface, player onboarding, sound design, and essentially every other aspect of game design, Babylon’s Fall is a failure. Games have bounced back from disastrous launches in the past, but in this case, I feel like it may be best to let sleeping dogs lie. The game’s one and only saving grace is that Platinum Games truly are the kings of combat, and while Babylon’s Fall is nowhere near the top of their collection of works, hacking and slashing your way through the Tower of Babel is at least, occasionally, kind of fun. It is just a crying shame that there is very little else to enjoy from the game; there isn’t anything pretty to look at, nice to listen to, or easy to engage with.