When you think of Conan the Barbarian, the images that come to mind are gritty and violent. Certainly nothing quite like the lighthearted take that Aussie dev team Mighty Kingdom have taken with Conan Chop Chop. This 1-4 player roguelite comes with a lot more surprises packed into its disarming and quite charming appearance.

If anything were to set the mood perfectly for this game, it’s the introduction sequence. A short and comedic animatic setting the scene for the story. The basics are simple: The comically evil sorcerer Thoth-Amon has created a dastardly Wrath-a-thon to trap the heroes of Hyboria. We have the choice of taking on the famous roles of Conan, Belit, Valeria and Pallantides to battle enemies, delve into dungeons, and defeat the guardians within. Once all are defeated, Thoth-Amon has promised the heroes handsome rewards… Which judging by the trademark evil cackle, isn’t true at all.

You can choose to go on this adventure alone, or as I highly recommend doing, with a party of 2 or up to 4. Conan Chop Chop really shines through its multiplayer runs, and you have the choice of couch co-op, online with friends, or random players. I’m not the most naturally gifted at roguelites myself, but was lucky enough to team up with a friend who is god-like with them. Regardless of either of our skill levels though, we didn’t expect just how much fun we’d have with this game.

The game starts off every round in a village with the large door to our end goal locked. Here you can kit yourself up for the fights ahead, all to unlock the four seals and head on through to the final stage. There’s an assortment of the four basics every hero needs; melee weapons, bows, armor, and shields. you can also get yourself some healing meat and charms. None of the equipment is character locked, so you can really customize your fight style however you like.

Depending on what charms you equip, you can gain boons like extra bombs, becoming BIG, or even have a slime friend help you in battle! The equipment you can buy is also randomized every round and area you complete. The gear gets better the longer you stay alive, but the prices get steeper as the enemies get tougher within each area too. Oh joy, inflation! 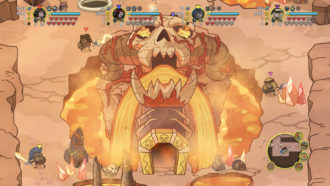 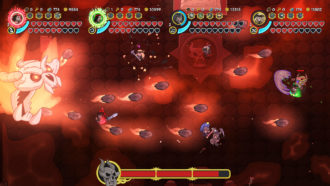 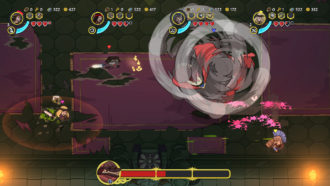 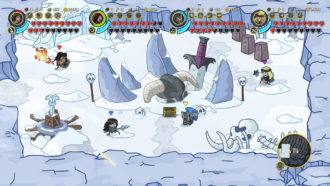 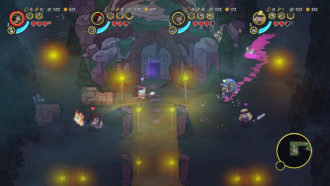 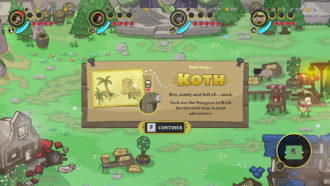 As you keep playing (and dying) more through the game, the tattered village will change. Buildings will be rebuilt and new shop items unlock, it will upgrade itself right along with you. When you level up and gain experience points, you can unlock more abilities and bonuses with the trainer in town. Any Steelfire you collect through your battles you can use at the smith to unlock those items into the shop’s rotating stock.

As long as you’re lucky with the randomly generated mapping, there’s plenty of gold and loot to find in each of the 4 areas before facing that area’s dungeon boss to progress. I particularly liked going up against the good old classic Sandworm dungeon boss. Nothing really that notable about it, he was just WRIGGLY and FUN. That’s all that’s really needed in this game, some uncomplicated fun. All of the dungeon bosses have the lucky number of three phases to get through to defeat them. They can be tricky to get through, but luckily not too infuriating.

You’re going to die out there, a LOT. But you’ll come back stronger every time you do. Such is the nature of a roguelite. With the randomized nature of the maps, no run is ever the same as the last. This means it never becomes predictable or repetitive, unless your prediction is that you’re going to have a good laugh and a lot of fun, then you’re golden!

I believe Conan Chop Chop has a distinct advantage to its style that they may not be entirely aware of. The simple and fun art and bright colours make it entirely more accessible to all walks of players. While the nature of the game’s combat is still entirely chaotic, the distinction between colour pallets and bold lines makes everything you hit easier to see. The audio cues also help prompt you on things you may have been too distracted to notice. The interface is uncomplicated, and battles simple while remaining challenging as heck. It’s all very inviting in it’s humour and playability, perfect for any level of ability to enjoy a roguelite.

All in all, the simple act of going CHOP CHOP on your enemies has been made so much more fun within Conan Chop Chop. It’s quirky and fun to play solo, but even more enjoyable in multiplayer. In fact, the game’s chaotic and funny nature makes it perfect to play with friends over and over again. With its easy to use controls and simplified gameplay set up, all abilities of gamers can pick this up and enjoy themselves. This quirky roguelite will certainly surprise you with how addictive and fun it can become.