Kirby and the Forgotten Land Review – A victorious vacation

Kirby as a franchise hits thirty this year. He may not have as many strong titles under his belt as its Nintendo counterpart Mario, but it persists alone due to its cute charm, passion and sense of pure fun. Kirby and the Forgotten Lands, the next mainline adventure for the pink-massed mascot, is no exception. Filled to the brim with stuff to do, a gorgeous art style and some of the strongest gameplay yet, our hero won’t just get their time in the sun due to the sun-kissed island setting, but also because this is one of the most memorable series forays yet.

Take a waddle on the wild side

Kirby and the Forgotten Land sees our pink blob hero ripped through a mysterious portal in the sky, transported to a curious, abandoned world. This world has lost all humanity, populated only by the new, dog-like creatures known as Garlfi (otherwise known as the Beast Pack) and other typical Kirby creatures. This includes the kidnapped and missing orange blobs known as Waddle Dees. It’s up to Kirby to venture across a variety of lands on this world, getting into platforming and combat hijinks as he attempts to rebuild civilisation at the residential Waddle Dee Town.

I covered this in my prior hands-on preview, but the opening series of levels is rife with enticing vibes as you explore a city, overgrown by shrubbery. Wondering just what on Earth this all means in the grand scheme of the franchise was a thought I kept in the forefront of my brain, passing through dilapidated buildings and a mall while stumbling upon beaten up cars.

Enter Forgotten Lands with reasonable expectations and you’ll soon see one of the best refinements of a long-standing Nintendo formula yet. On offer is plenty of platforming fun to sink your teeth into. It serves to be one of the longer Kirby adventures, with more to do than ever. All this comes along with my particular favourite aspects: exploration, completionism and combat.

“…one of the best refinements of a long-standing Nintendo formula yet.”

Thankfully, this feeling did not let up throughout the entire runtime of Kirby and the Forgotten Lands. While it won’t blow the lid off the franchise formula as some may have previously expected, there’s still plenty of great fun to be had. There is an ample sense of progression throughout, allowing exploration of distinguished areas with themes such as a beach, frost-covered scape and even a deserted theme park at twilight. Wondrously familiar iconography is present throughout the levels and it’s great fun to topple returning and new series foes along your journey. 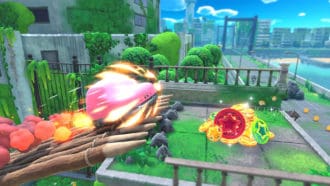 These levels come with their own setpieces each joyous in their scope and zealousness. This is thanks to the new Mouthful Mode, which sees Kirby wrapping their mouth around an inanimate object and taking its form. Not only does this add to the combat repertoire that already pre-existed with the series’ copy abilities, but will see Kirby do some bonkers stuff.  Taking the form of a car zipping around a track, a rollercoaster carriage cruising at high speeds, or a fan to power up a boat through water channels are just some of the forms you can take. One instance will even see our pink hero consuming mountains upon mountains of water, inflating to a significantly larger blob form. This last example provided some chuckles from me. There’s something so cute and charming about watching a beloved Nintendo character become inflated, spitting out water everywhere. I’ll spare spoiling some other weird and wonderful examples you’ll stumble across in the campaign. They’re worth experiencing firsthand.

All of these cute and silly hijinks contribute to your main goal. Kirby and The Forgotten Land is all about restoring Waddle Dee Town, the locale that your cute orange blob friends once resided in. To restore the town, you have to obtain these friends in one of two ways: finding where they are hiding in a level, or completing a given level’s feat. These feats can be something as simple as ‘eat x number of snacks’ but also can often require donning the Mouthful Mode, rewarding the player in both hilarity and the joy of ticking that completion meter ever higher.

Exploring every edible nook and cranny

The very reason Kirby has stuck around for thirty years now is the wonder that comes with exploring every nook and cranny. Being a 3D adventure this time around equals more approaches to finding every last collectible or knick-knack. It’s really exciting seeing the franchise in this new plane, finding new ways to climb high or delve deep. Blending equal reliability on both the aforementioned Mouthful Mode and the copy abilities is an excellent design touch this time around.

Sucking up enemies and taking their form also provides means for combat. Familiar forms are present here such as the slashing sword ability and bomb-throwing. Though, the ‘Ranger,’ which sees Kirby in a mining cap and wielding a musket gun, can be used for further exploration and progression as targets will pop up in the world for you to shoot, revealing more secrets. Similarly, using the Mouthful Mode to take up the form of a gigantic set of stairs will prove effective for not creating access to higher routes, but stomping on groups of small foes. Experimentation of using different skill sets to progress is rewarding of course – this is a Kirby game after all. But it is once again hampered by those opting into the lesser cooperative experience.

Remember how in Super Mario Odyssey the second player controlled the cap and kind of just sat there with not much to do? The same applies here. Player 2 in co-op controls Bandana Waddle Dee. While they can move about in their own and engage in combat, they are unable to perform any copy abilities and henceforth cannot help all that much with exploration. What I did notice is just how much they can break boss encounters. Bosses will ignore your partner entirely and focus only on Kirby, meaning they’re free to just give a barrage of hits out. This is welcome to some degree – some bosses are surprisingly tough. Still, more proof of this downplaying of the second player is that the moment Kirby is knocked out, it doesn’t matter if your partner is still standing, you’re taken straight back to the last checkpoint.

The Kirby franchise has some of the best boss designs you’ll find in a first-party Nintendo game, and that’s no exception here. While by no means does Kirby and the Forgotten Lands offer a mountain of difficulty to overcome, some certainly at least saw me breaking a sweat. Enemies will leap in and out of the combat ring, throwing their weight around. Sometimes, they’ll even greatly impact the very environment you’re in, making careful footwork very important. By the end of the game, you’ll be constantly juggling using your copy abilities, jumping, dodging the enemy itself and avoiding not only area of effect attacks but projectiles too. Blocking, something I’m not all that used to as someone that likes to remain agile and moving, helped to mitigate damage. If all else, Kirby and the Forgotten Lands also has an easier difficulty mode that people can notch down towards to prioritise enjoyment over the challenge.

Watching your town grow into something great

Gather enough Waddle Dees over time and your Hub world of Waddle Dee Town will change drastically. Shops and similar buildings or spots will sprout up, leaving places to go for level provisions but also downtime to experience other fun activities. This includes Waddle café where Kirby must moonlight as a hospitality worker, working through a lunch rush to serve hungry Waddle Dees. Like all other good video games, you can even waste the time away with fishing. Find yourself wanting to spend some of your hard-earned money? The Gotcha machine alley features the universe’s equivalent of Gacha-style characters models to collect, further satisfyingly ticking up that completion meter.

Shopping and milling about in the town also compliments the optional missions players can engage in outside of the critical path. These optional missions are fun, arcadey time trial events, requesting people make their way through with a pre-determined copy ability. A good challenge is offered here but also serves as ample training for the small tidbits of a given ability. One level taught me how to better use the boomerang with the ‘Cutter’ ability, having it linger in a spot after being thrown while I progress further. Make it out in good time and you’ll get not only a boost in currency but also a special star, used solely at the most exciting addition to the town: the Weapons Shop.

The Waddle Dee’s Weapons Shop is a store that allows players to upgrade their copy abilities both in stats such as damage and speed but also cosmetically. Find the required blueprint for the fire ability for example and you’ll see it take not only a stronger form but a volcanic appearance. Meanwhile, an upgrade to the sword-slashing ability can see Kirby wield a sword three times their size a la Cloud and their Buster Sword in Final Fantasy VII. The child-like wonder and joy I got out of seeing that adorable little pink mascot in a new fit and attack form is priceless.

It’s hard not to wonder around the world of Forgotten Land and see all the magic that still very much shines in Nintendo adventures. The worlds are all distinguished in their own right, with vibrant colouring and adorable, considerate animation touches. Enter a body of water and suddenly Kirby will be using a lifesaver floaty as they splash around. Tufts of grass can satisfyingly be trimmed when you use the cutter ability or set alight with fire. Backing your exploration of this weird and wonderful world are the triumphant orchestral music pieces you’ve come to know in Kirby games, once more bringing that familiar feeling of home to fans.

From a lot of years behind the Kirby franchise to smaller but other welcome forays like the BOXBOY series, Forgotten Lands once again emphasises how strong a developer HAL Laboratory is. They might not be the first, most prolific example when you picture Nintendo studios, but if all else this is a great step in further recognition for the team.

Enter Kirby and the Forgotten Lands with reasonable expectations and you’ll soon see one of the best refinements of a long-standing Nintendo formula yet. Cooperative play may waver in quality but does not diminish the wondrous experience ahead of you. On offer is plenty of platforming fun to sink your teeth into. Exploration, combat and the completionist itch that comes with a Kirby title are all present and strong here, and it also serves to be one of the longer adventures yet, with more to do than ever before. If you’re looking for the bright and joyous game to cosy up with on the couch this year, Kirby and the Forgotten Lands is without a doubt the one. Just maybe keep a suspicious eye on that beast pack.