Rune Factory 5 Review – A great harvest, but not quite ripe

Rune Factory 5 has been a game I have been waiting for since I was lucky enough to review Rune Factory 4 Special on Switch a couple of years ago. That release managed to hit the perfect spot between action RPG and Farming Sim without feeling like it’s giving either element the short end of the stick. Rune Factory 5 was developed by Marvelous and released in Japan last year, with a release in the west only just landing. As is pretty clear by its content, the series was originally a spin-off from Harvest Moon (now Story of Seasons) but taking the long-staying franchise in a fresh fantasy direction.

Much like how every farming sim opens with a deceased grandparent leaving you a farm, every Rune Factory game opens with the main character losing their memory and being dropped straight into the game. In Rune Factory 5, as the hero doesn’t have any memory of who they are, players are offered a place to stay in exchange for joining SEED as a ranger. Your job will be to help those living in the town and protect them from dangers while also maintaining a small patch of farmland out the back of SEED headquarters.

As usual for Rune Factory, time in-game progresses through six-day weeks, and across four seasons that affect what is going on in the world around you, what your neighbours are doing, what festivals can occur, and what crops will grow the best. Your small farm will quickly become your home base, waking up each morning to go out and till the fields, water crops, and keep the plot clear of stray branches or rocks. Crops grow fast and you can actually grow all crops regardless of season, though some crops grow faster and of higher quality in different seasons, and as time passes, there will be more seeds available at the store and so more plants to grow!

A lot of emphases is put on growing not just lots of crops, but good ones. If you want to grow some crops that are worth some serious cash, you need to pay attention to the soil quality, the seed quality, and a lot of other factors to grow yourself some really good veggies. Getting them up to level five isn’t easy, it’s a lot of work and determination, but it feels well worth it when you pull a perfect pumpkin out of the ground.

There are a couple of quality of life changes when comparing Rune Factory 5 to its predecessor, though not many. The main thing is that smaller items can now be picked up by just walking over them which is a lot more convenient than having to pick them each up individually. When you chop down a log, for example, running over all the wood causes it all to either jump directly into your arms or inventory depending on if you’re already holding something or not.

One other easily-loved aspect of Rune Factory’s farming/crafting elements is being able to collect monsters! During the RPG segments, players explore the overworld and fight monsters, but they can also be befriended by giving them a gift and persuaded to join your party or return to the monster barns built on your farm. The monsters will drop crafting materials daily, and they can also either join you out on adventures or stay back and maintain your crops on the farm while you are away. This gets really useful as the game progresses and you gain access to some extra plots of land on the back of giant farm dragons. It can be a lot of work to maintain multiple farms at once, so having the monsters water the plots for you is really helpful. 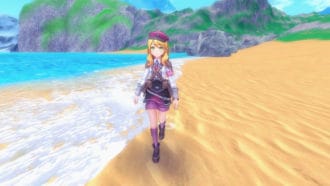 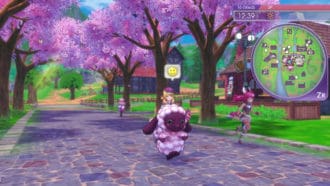 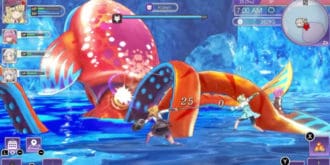 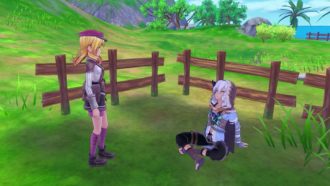 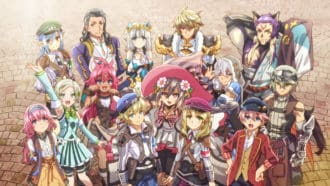 Switching between combat and farming is super easy because you can always have one farming tool and one weapon mapped to left and right on the D-pad. You can swap between your watering can and short sword in one simple tap. The combat Itself does have a surprisingly wide array of weapon options including swords, boxing gloves, staves, and even more. There are also tons of spells and other abilities that can be mapped to the face buttons when you are out fighting with the possibility of having up to 5 abilities mapped at any time.

The game maintains a really good balance where if you want to take the time to master the combat, that is absolutely an option. Similarly, you can also just grind in easier areas and throw a fireball at everything from a distance if you so choose. You also have an interesting ability called the ‘spell seal’ that is always mapped to the left trigger that is used to freeze monsters in place or even convince them to join your party for the rest of the day. Both combat and farming don’t take leaps and bounds from their previous entries, but there is still a lot to love and enough updates to keep it fresh. Unfortunately, a lot of this brilliance is overshadowed by how bad Rune Factory 5 sometimes feels to play.

One of the first things that you will notice when booting the game up is the abysmal framerate. While it does have moments of sturdy 30 FPS, it isn’t often. Pretty much any time you are in an area with lots of objects (whether they be NPCs, particle effects, or pick-ups) the framerate drops to 10, sometimes even less. Entering an area with lots of objects often also means waiting for everything to pop in before being able to actually do anything. Every time I walked up to the plot of land where I was growing my crops, I had to wait for all of the soil and crops to actually load in before I could begin my farming for the morning.

The framerate didn’t bother me too much during combat, but what did bother me were the input delays. Sometimes when pressing the attack button the game would either not register my button press, or would instead think I was holding down for a charge attack. So many times this left me floundering during combat and ended in me dying and having to pay the thousands of dollars that the town clinic charges to heal me.

Despite the framerate, the game does have some really nice art direction. The graphics themselves aren’t especially impressive, but the choice of colour and the character models are both very sweet and appealing. The character portraits are even nicer with classic 2D art that displays the emotions of each character perfectly. The most impressive part visually is actually the opening animatic which is animated in anime style 2D and is lots of fun. It has a great bop of a song that plays during it as well!

The music in the game overall is very nice, each dungeon in the overworld has its own theme and each season has its own music on your farm. My favourite track is the one that plays after the sun sets, it’s really calming and suits the relaxing Rigbarth nights perfectly. The voice actors are putting on a great show as well, everyone fits their characters nicely in both English and Japanese, and while it gets a little campy, it actually feels right at home in the semi-fantasy world of Rune Factory.

Having voiced characters does come with its caveats though. The protagonist never shuts up. The whole time you are farming, they have something to say about every little thing you do. Each seed planted and each crop watered, they will have a fun line to say and you will get sick of it. After some time I switched to the Japanese voices and that at the very least gave me a break, but I’m sure it’s only so long before I get sick of that too.

Rune Factory 5 is more of the familiar, which isn’t necessarily a bad thing. It makes enough small improvements that it does feel newer, but if you are looking for something leaps and bounds different from the last game, you will be disappointed. The game has a lot of charm and love put into it, but the abysmal frame rate does make it hard to recommend, even though I thoroughly enjoyed it. With some future patches addressing the game’s framerate issues and input delay, Rune Factory 5 could easily turn into a wonderful game.

Bree somehow managed to weasel her way into a game design degree, hasn't stopped playing Skyrim since it first came out and is unrelentingly thirsty for Nagito Komaeda.