Traveller’s Tales has been curating their brand of quirky LEGO adventure game adaptations since 2005, beginning with the LEGO Star Wars prequel trilogy. They have gone on a bit of a Star Wars hiatus since LEGO Star Wars: The Force Awakens in 2016, with various other movie franchises captured in this style. Things have now been brought full circle with LEGO Star Wars: The Skywalker Saga, which adapts all 9 main series episodes, along with opening up the entire galaxy as a sandbox to do side quests, hunt for secrets and smash things with your lightsaber. Although it doesn’t resolve all of the bugbears that the LEGO adaptation games have had, LEGO Star Wars: The Skywalker Saga is a true refinement of what has made these games entertaining, and is a rather fun time.

A long time ago…in a LEGO playset far away…

LEGO Star Wars: The Skywalker Saga lets you play through the events of all the main series movies, from the Phantom Menace all the way up to The Rise of Skywalker. The cutscenes play up the inherent ridiculousness of a grand space opera being re-enacted by small plastic toys, adding all kinds of slapstick gags to add to the parody atmosphere of the game’s presentation. Not unlike more recent LEGO adaptation games, LEGO Star Wars: The Skywalker Saga has voice acting, performed by a mix of actors reprising their roles from other media and sound-alikes doing decent jobs of mimicking the film actors’ portrayals.

My issue with the voice acting is that the script really doesn’t match the tone of the visuals. The lines the characters deliver are more or less taken wholesale from the mostly straight-laced movies. This would be fine if it was supposed to be a straightforward adaptation, but the visuals are going for parody, and when the characters are speaking they are barely ever referencing this, only ever making jokes if it was from a scene in the films where the same character made a joke.

Comedic seriousness can work in films like The Naked Gun, but this isn’t going for that same approach. One aspect I appreciated was the ability to turn on Mumble Mode, which swaps out the voice acting with the Mr. Bean-esque grunting and mumbling from the classic LEGO Star Wars games. However, you can’t turn off subtitles in this mode, so you’re still getting the dull, dramatic script in the middle of all the pratfalls. 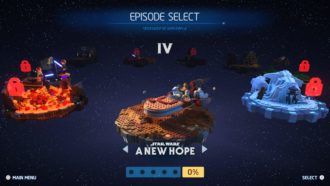 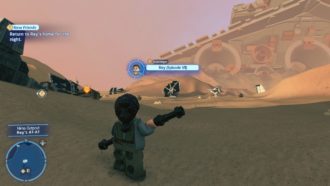 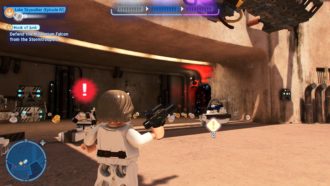 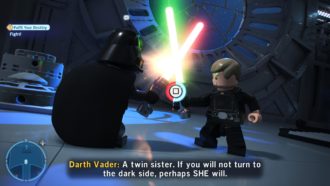 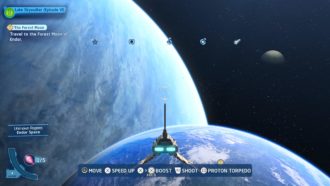 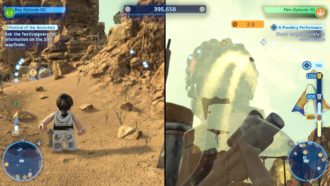 Breaking your way through the galaxy

In terms of gameplay, LEGO Star Wars: The Skywalker Saga plays like a refinement of everything Traveller’s Tales have learnt in their 17 years of making LEGO games. On one hand, there are the classic linear levels, seeing you play as Star Wars heroes like Obi-Wan Kenobi, Luke Skywalker and Rey as they experience their journeys during the events of the 9 movies. However, in between the levels, you can freely explore the entire galaxy (or at least any planet you have visited before), breaking or turning up anything not nailed down for studs, side quests or Kyber Bricks as any character you have unlocked or purchased.

“The level of ambition with which LEGO Star Wars: The Skywalker Saga attempts to bring its setting to life is admirable.”

The level of ambition with which LEGO Star Wars: The Skywalker Saga attempts to bring its setting to life is admirable. Every single planet you visit, from classic locations like Tatooine and Coruscant, to places only lightly touched on in the movies, like Kijimi or Luke’s sanctuary on Ahch-To, are freely explorable and filled with secrets.

Considering how many characters you can chat with and how many homes have rooms with Easter Eggs, LEGO Star Wars: The Skywalker Saga arguably comes closest to making the Star Wars setting feel like a vibrant and lived-in location in a video game since maybe BioWare’s Knights of the Old Republic.

Although the experience begins pretty on-rails, completing any of the Episodes will unlock Galaxy Free Play, allowing you to romp around the galaxy at your leisure. You can engage in space battles, attempt shooting gallery challenges, or roam around solving puzzles. Fortunately there is a handy side-quest menu to keep track of everything, as well as clues for where to find more.

The gameplay itself has been tightened up compared to its more simplistic predecessors. Ranged characters now control in a proper third-person-shooter style, being able to properly aim their blasters by holding down the left trigger button. Other character classes also have a variety of different tricks up their sleeves, from shock grenades to a variety of Force powers. It’s still pretty easy, mind; the only penalty for failure is a very minor loss of studs, and most enemies go down so easily that it is almost pointless to spend anything on further combat upgrades. That said, if you’re playing a LEGO game, you’re probably not here for the combat anyway.

No, it’s not the challenging combat that will drive you forward, but rather collecting all the characters. LEGO Star Wars: The Skywalker Saga boasts well over 300 characters to purchase or unlock; that doesn’t even include ships or alternate costumes of characters. Some of these you get for free just by playing the Episodes, or completing side quests. I quite appreciated how every character is accompanied by a little biography explaining who they are; if you’re a more casual Star Wars fan who doesn’t know who Ki-Adi-Mundi or Zam Wesell are, then that might help. For the massive Star Wars nerds out there, however, the amount of fanservice on display is sure to delight.

I do miss the lack of a character creation feature, however. The ability to make your own ridiculous LEGO homunculi by mashing together Yoda’s head, Chewbacca’s body and Darth Vader’s arms and legs has been a mainstay of the series since LEGO Star Wars II: The Original Trilogy. While arguably unnecessary considering the vast number of characters we have to choose from anyway, the character creator played into the joy of creativity that has been central to the LEGO brand, and its absence is felt.

Traveller’s Tales’ LEGO games have been one of the last bastions of local two-player co-op, and its still fun here. With the wealth of side quests and mini-challenges scattered around each area, you can cover a lot more ground with a second player, and the camera splits in two to allow players more independence.

The scripted levels are also fun in co-op, although being restricted to whichever characters you’re supposed to play as does make certain sections, like Luke’s climactic confrontation with Darth Vader in The Empire Strikes Back, a bit less engaging for player 2. It’s not so fun when you’re stuck playing as R2D2 and can’t do much to contribute to a lightsaber duel.

LEGO Star Wars: The Skywalker Saga is also a joy on the presentation front. John Williams’ classic compositions are a delightful nostalgia trip, from the thrilling Duel of the Fates to the mysterious and triumphant Rey’s Theme. The LEGO games’ particular brand of mixing LEGO figures with LEGO and realistic backgrounds has also never looked better, with this game bringing an environmental weathering system that realistically chips away at bricks and makes them feel more grounded and part of the world. I even loved the little animations of your ship flying from space to each planet; it gives a great sense of immersion and that you are actually travelling between planets rather than merely teleporting between shooting galleries.

LEGO Star Wars: The Skywalker Saga is what all of the LEGO games have been building towards, if you’ll pardon the expression. With its huge open world with side quests, puzzles and secrets galore, it’s a great adventure game for players of all ages. If you’re a Star Wars fan, then the nostalgia trip and mountains of obscure characters and references they manage to sneak in here is a real treat. While the unimaginative script and missing character creator does hold it back somewhat compared to previous entries, from a gameplay and content standpoint, LEGO Star Wars: The Skywalker Saga is the most ambitious LEGO game yet, and a must-have for Star Wars or LEGO fans out there in the galaxy.