Proving lightning can indeed strike twice, developer Cellar Door Games have released their followup to the 2013 hit, Rogue Legacy. This action-packed sequel expands upon the lineage set out by its predecessor, practically bursting at the seams with new content and mechanics. After previewing the title following its Early Access debut in August of 2020, I was excited to jump back in and see if the game’s promising opening carried through to an excellent full release.

Rogue Legacy 2 is a game about ancestry, progression, and overcoming seemingly insurmountable adversity. It’s a side-scrolling action platformer that, as the name suggests, leans heavily into its roguelike nature. You’ll set out on runs as you take your hero and siege through a castle full of foes, hazards, and bonuses. Inevitable death is an opportunity to advance as you spend the gold you’ve acquired to buy permanent unlocks and passive advantages. You then repeat the process as an heir of your slain hero takes up the challenge with any newfound advantages accrued by the late parent.

Whilst repetition is built into the core of Rogue Legacy 2 (and any roguelike for that matter), the random elements, fun gameplay, precise controls, and the constant feeling of rewarding progression prevent things from ever feeling dull. It really is a phenomenal example of a sequel done right. The original already proved to be a compelling concept. Expand and update upon that concept to create something with an impressive scope and almost endless replayability.

“…the random elements, fun gameplay, precise controls, and the constant feeling of rewarding progression prevent things from ever feeling dull.”

Rogue Legacy 2’s world is broken into 6 different regions, each containing an ‘Estuary’, aka boss fight. Your first goal in the game is to defeat all 6 Estuaries and thereby open the seal to a gold door at the entrance of the game. It’s a big task, and one that’s likely going to take dozens of real-world hours and in-game generations. Rogue Legacy 2 is a challenging game, but one that’s full of constant milestones and pieces of meaningful progression. As you play and get deeper into the world, you’ll not only unlock new pieces of gear, runes, and passive upgrades for future runs, but you’ll also unlock NPCs, quests, and teleportation platforms to instantly transport you to deeper parts of the game.

The world itself is varied, from the snow-covered landscape of the Kerguelen Plateau to the enchanting corridors of the Stygian Study. You’ll spend a good amount of time within each zone as you learn the particular traps, foes, and region-specific challenges that are likely to come with each. Secrets can be found, challenges unlocked, and eventually, each zone will start to feel familiar and more easily traversed, despite the random generation that shifts things from one run to the next. It’s actually quite commendable how every new zone always felt so intimidating and challenging when first encountered, yet through progression and learning, each started to feel more naturally approachable as a new, more threatening zone gets introduced. You won’t have to fight through all 6 zones every time, however, as teleportation platforms unlocked by a pizza delivery girl allow you to zip straight to the entrance of a boss room or the beginning of a new zone. You’ll often find yourself dedicating specific runs to achieving specific goals, potentially going straight for a boss fight and therefore not needing to play through all the zones/rooms that came prior. Other times your goal will be to simply accumulate as much gold as possible or explore to find more secrets, currency, and unlocks, in which case you’ll gear up and methodically tackle every room and every zone 1 by 1. It’s good that the game naturally encourages these diverse approaches, putting the power into the player’s hands and not forcing an optimal style of play. 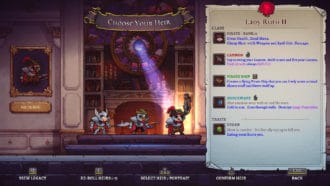 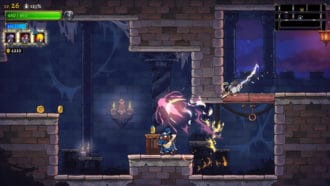 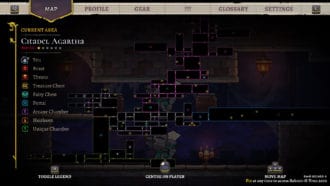 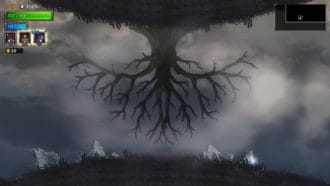 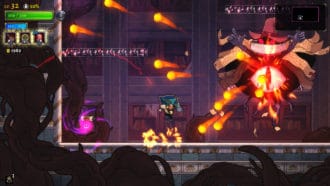 Where Rogue Legacy 2 really impresses is in its depth of content. The aforementioned 6 zones are impressive enough, but the range of character classes, talents, spells, traits, gear, runes, heirlooms and more is just incredible. On one run you’ll play as a tiny, vampiric archer who can shoot a giant fireball, on another you’ll play as a pacifist pirate who sees the world in sepia tones and can only gain gold through looted chests. With 15 character classes available, all with a different playstyle, weapon, class talent, and more, you’re more likely to find yourself overwhelmed than bored. It’s a showpiece for the evolution of Rogue Legacy 2 over its predecessor. Things always feel vibrant and frantic, and no one run is ever the same as the last.

Whilst the game’s variation is commendable, it comes at the cost of some clarity. New mechanics are introduced at a slow enough pace, but even then, you’re likely to find yourself prioritising certain elements whilst ignoring others to your own detriment, simply because it makes the game less confusing. The 15 classes are a good example. Get to know the Knight, Barbarian, and Gunslinger really well, and suddenly the desire to try to master a new class like the Dragon Lancer, Valkyrie, or Bard is severely reduced — even if that class would excel in accomplishing a specific goal. Now add to this the fact that you have different class ranks with added passives, different talents, spells, traits, heirlooms, a skill tree with what must be around 50 unlocks, a gear system with multiple tiered options that have different set bonuses, a rune system that unlocks additional modifiers and advantages, and a soul shop that once again gives a different set of unlockable advantages that use the game’s fourth kind of currency. Suddenly it’s easy to realise how complex Rogue Legacy 2 can get, and that’s all done before you’ve even encountered your first foe.

I don’t want the above to sound like an outright criticism because it’s not. Rogue Legacy 2 is a deep and challenging game, but it can come at the price of being daunting and overly complicated for more casual players. The upside is that fans of the original have a richer, more time-consuming, and more rewarding sequel. I suppose it’s hard to have one as well as the other.

What’s undeniable is how well this game runs and controls. The platforming feels good, with an unlockable dash ability and a spin kick that launches you off foes or obstacles. These two abilities are skill-based yet fun, and they just get more satisfying the further you progress and the more you need to rely on them. Platforming segments are built into the random generation of the world, with specific challenges giving players an opportunity to test their skills and be rewarded for their efforts. Combat is equally impressive. Dodging fireballs and javelins will play a big role as you position yourself to shoot, slash, punch, or blast your way to victory. You’re always given all the tools you need to succeed, so combat ends up feeling like a mixture of reaction, mechanical skill, spatial awareness, and intelligent on-the-fly decision making. Most importantly, it always feels tough but fair.

Unlike other roguelikes, Rogue Legacy 2 puts a lot more stock in the overall progression being made from run to run rather than progression made within a specific run. Much like the game’s complexities, this design decision has both its positives and negatives. It removes the daunting feeling of needing to achieve everything all at once, though it does remove any possibility of beating the game early before grinding out all the upgrades. It means progression is always felt, but it also means you’re often not getting the satisfaction of achieving everything all within the same life. Lastly, it provides natural pacing that can’t be whipped through with a lucky run, although it does mean that the feeling of power that often comes during a roguelike game is quite minimal here. Rogue Legacy 2 isn’t really a game that wants you to find multiple powerups, great combinations of spells and abilities, and improve your stats during a run, making you feel more and more powerful throughout the one life. It wants those improvements to come slowly over time, upgraded between one run to the next. It’s an interesting trade-off that sets the game apart from many of its roguelike brethren. Whether that’s to your taste or not will be in the eye of the beholder.

Stylistically Rogue Legacy 2 excels. Clean and simplistic on the surface, the game’s visuals have an unintimidating look that’s supported by a superb soundtrack. Nice flourishes exist such as the miniature recap after your death that retraces your movements, enemies killed, and gold accumulated. Certain traits add their own stylistic flair too, and it’s here where Rogue Legacy 2 is clearly happy to have some fun and show its quirky side. One trait by the name of synesthesia creates colourful trails for yourself, enemies, and hazards. Other traits put a spotlight on animated objects whilst the rest of the screen is blacked out, or displays the entire world in black and white. The visual variety and fun offered through these traits keep things fresh and exciting. The game is comfortable showing a comical side that juxtaposes nicely against the challenging offerings.

Rogue Legacy 2 learns from its lineage and presents a superb sequel with a huge amount of depth of content. With so much replayability and meaningful progression, the game will have players hooked on its delightful gameplay loop for hours upon hours. Built with both style and substance, Rogue Legacy 2 is a tremendous success for fans of the original and the genre. It may not be a game for everyone, but for those willing to take up the challenge, a truly splendid journey awaits.