The House of the Dead: Remake Review – Roomero for improvement

Our house… in the middle of a siege… The House of the Dead: Remake is here! After a prequel back on the Wii, we’re finally seeing some new blood being pumped into SEGA’s zombie arcade series. As the title suggests, this entry is built from the ground up as a new spin on the original from 1996, with all-new graphics, sounds, and modes to shoot your way through hordes of zombies either alone or with a fellow agent.

The House of the Dead: Remake has a lot to live up to for old-school arcade fans, so has it managed to do justice to its green and axe-loving predecessor? Or did it need more time in the lab?

Those familiar with the original The House of the Dead will likely notice right off the bat that this is not a case of simply touching up the old textures and slapping on some filters; no, what we have here is a near shot-for-shot recreation with all new models, environments, music, you name it. The reason for this is actually two-fold. The source code for The House of the Dead 1996 has been lost to time, while the original soundtrack is locked behind a rights issue, so everything presented here is new to the remake.

Having watched some side-by-side footage of the two, I can say that developer Forever Entertainment have done a great job recreating the experience, with the camera whipping around the environments in the same way, with the same enemies, to a similar soundtrack. To a purist, this may sound like sacrilege, but if you can appreciate the Remake for what it’s trying to accomplish, then it really deserves to be commended in this regard. Capturing the feel of another game can be difficult at the best of times, but here we’re seeing a literal recital that didn’t have the first game’s code to refer back to.

As you’d expect with an old-school light gun experience, The House of the Dead: Remake is a very short and sweet type of game. Playthroughs will go for an hour at most, a lot less as you improve, with the draw of replayability coming from a number of factors. This includes your classic high score system, and in The House of the Dead: Remake, spending enough continues will eat up your points and encourage you to get even better on the draw. There are also a bunch of alternating paths, wherein you can find different enemies to fight, people to rescue, and boxes to bust open for shiny coins!

On top of this, there’s also an added Horde Mode, which changes the level layouts to have WAY more zombies to blast away, along with unlockable weapons and even some cheat codes that are tied to an achievement system. Really, when it comes to how much there is to see and do, it’s a lot denser than you’d initially think, and that’s encouraging to see from what could have easily been a quick rehash with little else to offer. 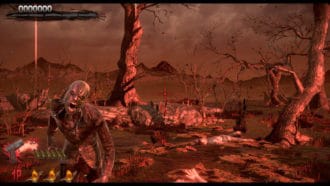 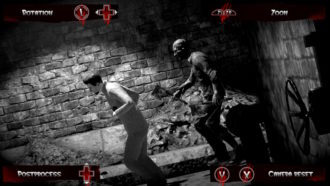 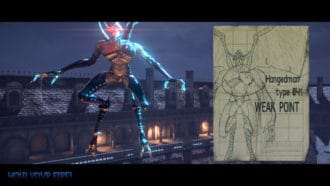 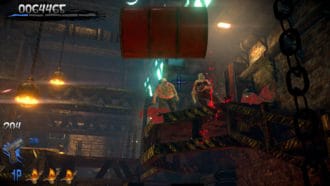 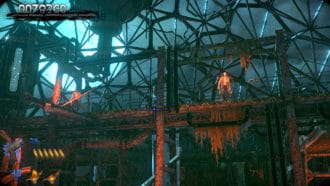 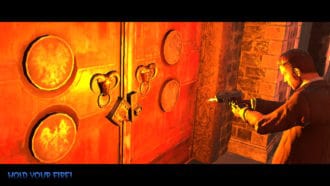 I sincerely wish my praise for the game could continue beyond this point, but this is where it all becomes a bit more of a mixed body bag.

Let’s start with the presentation, which is by no means terrible but does need work. The Remake’s soundtrack, to me at least, sounds decent enough. That is of course when you’re able to hear it; overall, this game’s audio balancing is just all over the place in a number of areas that stick out at odd times. Gunfire sounds punchy as it should, but then you have civilians who sound like they’re whisper-shouting, or a boss who will try to intimidate you but you’ll miss what they said because another sound covered it up. There’s also the greater issue for some fans that will miss the original title’s soundtrack, but I for one can’t comment on that as I don’t really have any attachment to those older tunes.

A more significant issue is the framerate. The House of the Dead: Remake has a number of nice visual effects that tend to tank the game’s FPS, so the devs saw fit to include a Performance Mode. Unfortunately even with this enabled the game still struggles to maintain a consistent framerate, and I could maybe understand that if the game were really pushing the hardware with amazing graphics, but frankly… it isn’t.

I want to be fair here, the game is not ugly, it is not some kind of eye-sore or anything, but I honestly do have a hard time believing that graphics like these are pushing the Nintendo Switch this hard.

“My playtime was spent constantly needing to re-centre my aim, whilst randomly having my inputs ignored and my directions disobeyed entirely.”

Another big issue in The House of the Dead: Remake is the controls. In all honesty, playing this game stopped being fun after a while due to all of the random problems I experienced just trying to play the game. This is a fast-paced, old-school arcade shooter. The one thing you absolutely HAVE to nail is the controls, and this remake doesn’t.

Straight off, the Joy-Con gyro controls are horrific. My playtime was spent constantly needing to re-centre my aim, whilst randomly having my inputs ignored and my directions disobeyed entirely. I also came across what I can only describe as a new kind of Joy-Con drift where your aiming cursor keeps moving off to the right even when your hand hasn’t budged an inch. It’s galling when you consider that we had similar games back on the Wii that got this right, and some of those games were part of this franchise!

The other options aren’t a whole lot better in my opinion. You can combine gyro with the thumbstick, but it feels awkward and you tend to wind up sticking to one or the other after a while. Then there’s simply using a controller and just moving the cursor around with the left stick, but this method is so slow that taking damage becomes unavoidable in Horde Mode and feels just so unsatisfying.

I really, really wanted to like this game. I wanted The House of the Dead: Remake to knock it out of the park because we’re long overdue for the return of these sorts of light gun titles. There was so much potential here, and it’s bizarre to see such a disconnect between the level of dedication put into the accuracy of the recreation compared to other areas of the game. Hell, they even recreated the cheesy voice-acting… but compare all of this to the controls that are reminiscent of Wii shovelware and I’m left baffled by the final result.

Just days ago, it was announced that the game would also be coming to a bunch of other platforms, which really makes you think… was the Switch version some rushed afterthought? Look at the 60fps footage in the trailer hyperlinked above and see what I mean. Perhaps in the future we’ll see a patch to bring the Switch gameplay up to snuff, but for now… buyer beware, you’re in for a scare.

The House of the Dead: Remake could have been such an easy recommendation if it controlled properly. It hits all the right notes EXCEPT for the most important ones, and I seriously cannot wrap my head around how it got released in its current state beyond a deadline that absolutely should have been pushed back. Either way, I think the Switch got the short end of the stick here… with FPS lag and bad controls to boot. At this point, you’re better off waiting for a version on another platform or at the very least waiting for a patch for this one, because this is one game that should’ve stayed dead a while longer.