The Serpent Rogue Review – Master of some

Back in 2018, developer Sengi Games announced their “botanical action adventure” The Serpent Rogue. Now, four years and a worldwide pandemic later, their game where you play as a plague doctor is released. The protagonist is dubbed “The Warden”, but they wear the traditional mask and hat of the physicians that treated those inflicted by the plague dating back to the 1600s. You, as the Warden, are tasked with ridding “the corruption” from a mythical land by using your alchemy skills to treat and/or kill those who are infected. To do so you must use the land’s resources to build up a number of potions and become allies with the animals and people around you.

Exploring the lands of The Serpent Rogue and traversing each distinct landscape is the most important part of the game’s many gameplay elements. Each area has its own flora and fauna and crafting becomes invaluable in this journey. The map of the Serpent Rogue is divided into lands that are connected but separated by loading screens, meaning that they have their own distinct feel. These vibes come in three varieties, the first being a serene cottage-core style atmosphere with whimsical music and cute furnishings. The second is doom, gloom, and unease due to the land and creatures being plagued by the corruption. The third is somewhere in-between.

The first thing that the game will encourage you to do is harvest the botanicals spread across each of these locations and research them. You can do this via one of two labs that you find at your home base. Each ingredient differs in how many times you research it before you learn it. For instance, rat hair may take fifteen pieces to research whereas blueberries may only take five. The aim of collecting and researching these ingredients is to concoct potions that will help in defeating those who stand in your way of ending the corruption. Each potion you find throughout the world comes with a breakdown of what chemicals it contains. Therefore, to come up with new potions you need to use your deduction skills and analyse those that you already have on hand.

In finding out the recipes for each of these potions, such as damage and health, you will need to use your deduction skills and the potions that the game randomly gives you throughout your playthrough. Once researched, each item will reveal their main ingredient and therefore its use in your potion making adventures.

Potions aren’t only used to fight the corruption. As a physician, your skills can be requested via a bulletin board in your home base; with each request offering a certain amount of gold coins for your troubles. It is important to gain these coins early in your playthrough so that you can throw them into the “gifted trees” well. Once you have thrown in a hundred coins, you will be bestowed a potion that will rid a person or thing of corruption.

It is very easy to lose these potions on your journey due to the game having a Souls-like “die and your inventory hangs out at your gravesite” mechanic. It does let you retrieve your belongings in your next life, but if you don’t grab them before you die again, they are lost forever. To compensate, the game does give you access to a number of chests found around the world and it is very important to take full advantage of this storage system.

In The Serpent Rogue, Death is something that can happen easily, especially with the game’s challenging combat mechanics. Weapons in the shape of axes and shovels have a limited lifespan and are hard to come by. Simple fighting moves such as blocking and punching aren’t very effective. In the corrupted areas, enemies are rampant, meaning that sometimes I had a number of them, some armed with weapons, chasing after me. It was easier to outrun them rather than fight as their hits seemed to always do more damage than mine. When I was able to brew health potions, I found the process of equipping and consuming them slow and painful, requiring too many button pushes. Sometimes I found myself hitting enemies with health potions instead of my shovel, which meant, I was not only healing my foe but also wasting my precious resources.

“The Serpent Rogue.. left me perplexed by the workings of the world rather than enchanted by them.”

Corrupted enemies come in many sizes and flavours from humans, to snakes, to rats, and dogs. They can either be roaming the land, or they can sprout from big boil-shaped mounds that explode causing damage. The corruption builds up over time, accelerating in power, represented by a percentage on the top of your screen. When this number hits 100%, a corruption storm will rage, issuing an attack on you that you cannot fight. Once the storm runs its course, the land’s geographical elements along with its resources and enemies are reset.

Alongside the corrupted land, there are other smaller areas that each have unique characters and purposes. The reason for these areas aren’t always fully divulged by the game, meaning that a number of world elements left me wondering why they were included. One of these areas is a church that has a door that leads to a “battle area” where you fight a corrupted creature. Once the creature is defeated, you are sent back into the church as if nothing happened. The NPCs, like the rest of the world, are also baffling. Their design are rough, seeming unfinished with their faces blank and movements mechanical. They randomly show up around you equipped with names and animal companions with no real purpose. 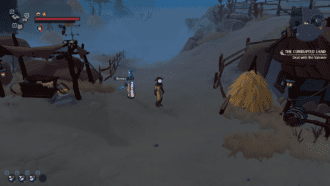 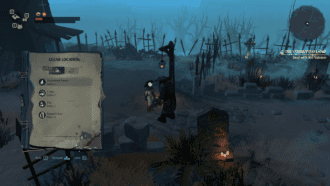 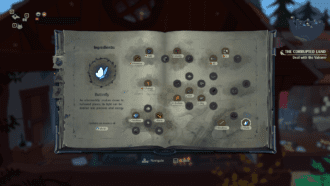 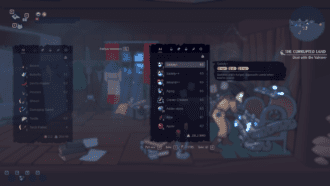 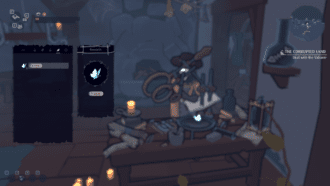 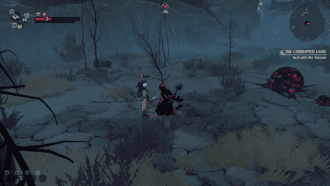 The game does encourage you to “buy” companions via a seaside area called the Pier that is looked over by a grumpy walrus in a raincoat and hat. Every few minutes a boat sails into the shore that has a number of “prisoners” that you can choose to purchase. They are priced between a few to a hundred coins and other than wielding different weapons, the reason for these vast price differences is never made clear.

In another area you will find an Undertaker who will help you bury the bodies of those you have killed. But the game never says why this is necessary and I didn’t come across any repercussions for leaving bodies lying around. The Serpent Rogue frequently left me scratching my head wondering what exactly the point of so many gameplay elements were. Instead of feeling engrossed by the number of things to do in The Serpent Rogue, I found myself confused, with not enough time spent giving the player information about their importance. It’s unfortunate, but I often found myself perplexed by the workings of the world rather than enchanted by them.

The Serpent Rogue is a game that has a lot going on, which unfortunately has led to most of the game’s features feeling rushed and not fully executed. Keeping it simple would have been a good mantra for The Serpent Rogue to live by, but it instead tries to implement too many things with not enough finesse. The game certainly has interesting researching and crafting elements, with some other unique ideas too. However, it falls short with clunky mechanics and a lack of polish.