Anuchard is the striking new bell-bashing indie game from the folks over at stellarNull that is hitting a near-perfect tune. This RPG is an action-adventure sharing the qualities of a puzzle game and a brawler. Clang your way through dungeons as a charming little bell-tolling battler, in search of a way to restore the land.

As an indie RPG, Anuchard is quite a charming release featuring a stylised array of characters and a setting that is certainly pleasing to explore. Playing as the Bellwielder, you set about restoring the sole village on the last of the floating islands of Anuchard. You wield the Audros Bell, a weapon that’s somehow capable of restoring the villagers that have been turned to stone. When you aren’t in the quaint town, you’ll dive into dungeons and dong your way through. The game tells this clever little story that is so appealing, setting you up with a quest to save the town after all the guardian’s disappeared in the prologue.

The game’s story pulls you in with a call to action as you wield the bell weapon. It’s not long before you are recovering the villagers and begin to see the pieces of the story pull together. While text-heavy, after a shaky beginning, the game finds the tracks and the pace starts to feel more in tune with the action in the game. I found it all quite endearing, and it does move towards interesting territory when it becomes apparent why the guardians were forced to leave and what their return will mean for the settlement.

Anuchard plays surprisingly well, which is to say that while the movement in the town area is quite basic, the dungeon areas are where it really comes into its own and feels good to control. The dungeons are also great to explore, featuring varying layouts and increasing difficulty. This was quite surprising as it’s definitely not uncommon to see dungeons become monotonous when the focus is on the role-playing game elements.

“…I welcomed any chance to bash something with the Audros Bell.”

Each dungeon features an assortment of enemy encounters that are such a great fit for this style of game. What really sets this game’s combat apart from other dungeon brawlers is its style. The combat feels solid. Swinging the bell is a mix of hitting the enemies and sending them careening into walls for extra damage. This is a lot of fun because it challenges you to set the shots up as you sprint towards them ready to strike. It can also be quite challenging with a group of enemies, so that also adds to the fun. While these encounters can be viewed as repetitive, in Anuchard I welcomed any chance to bash something with the Audros Bell.

When it was first introduced, I thought the cooking was going to be quite annoying but it turned out to be the opposite in the game. Preparing dishes aids you in the game by adding buffs and even unique abilities to your character. I liked that these meals give you the ability to hone your playstyle to your own tastes to complement the Audros Bell weapon in combat.

It’s also very satisfying to slowly upgrade the settlement area in the game. It’s great to see your progress in the game change the hub areas and see the world be rebuilt. Later in the game, you’ll be surprised at just how many places there are to explore outside of the dungeons once repaired. It does however lead to issues in navigating the large area.

Where the real fun combat begins is when you have to take on the guardian boss battles. These feature superb and varied attack patterns. The combat is quite simple and yet it manages to be so satisfying. While it’s no souls-like, each enemy feels fun to take on, and adjusting your strategy to suit them is a neat experience. The boss battles remind me of what you’d face in a Mario game, though with a meaty health bar and top-down art style. Part of me wishes there were more boss-style encounters within the dungeon areas of the game since they prove to be so fun to complete. 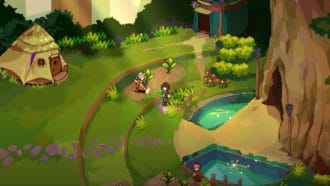 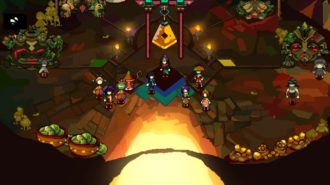 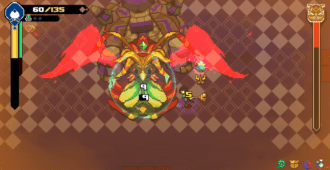 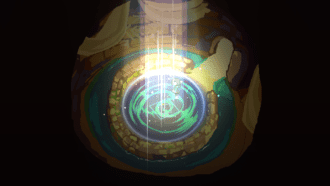 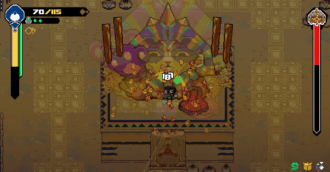 When you aren’t bashing enemies with the bell, you’ll find yourself up against puzzles in the dungeons. Honestly, these were all fairly straightforward. On occasion, you’d be hunting down switches to unlock the next area, or sometimes you’d be batting crystals through levels to hit target points to progress. The puzzles aren’t going to have you stumped for long, but going through the motions for each at least does come with the reward of progress through the level.

“The puzzles aren’t going to have you stumped for long…”

Another of the game’s strengths is its art style. The detailed pixel work creates such a rich environment which the 2D character art on dialogue screens thrives in. The world design of Anuchard looks as though it’s been inspired by the likes of Bastion but with a more pixilated approach. I did find the character design somewhat unsettling – the lack of faces on characters is rather uncanny but fits in the game nonetheless and is a choice from the developers I’d like to know more about.

Where Anuchard falls short is in how it communicates the objectives to you as a player. Early on it was quite difficult to even find objectives let alone navigate to them in the town area. The game is lacking a dedicated map and objective system, so it means you feel as though you’re fumbling around. While it does tell you where to go in dialogue, it seemingly refuses to guide the player in a more direct way and feels like it’s missing that needed guidance. Having a place for players to refer to their location and current objectives would help to avoid the feeling of walking around in the dark.

Anuchard is quite a great title that’s worth a look if you’re not picky about the little things. The combat, boss battles, and pixelated art style are what sold it to me as a game I’d keep playing. I do believe some elements here aren’t quite tuned correctly though, so it’s a bell you’ll want to consider before ringing. But that didn’t stop me from appreciating it a lot. My only disappointments come from unclear objectives that are hard to find. Even so, if you can handle walking around blindly and talking to everyone, then you’ll soon enjoy Anuchard just as much.

If you’re after a bell-bashing good time with all the style, boss battles, and even cooking, then this game is going to sing the tune you’ll want to hear. Anuchard is a hearty indie game with much to give to those who are looking for an appropriate mix of dungeon donging and puzzle-solving chaos. It might not be a genre cornerstone with some notable shortfalls, but it will still keep you ring-a-ding-dinging as you solve puzzles and traverse its dungeons.