Best Month Ever! is the newest indie title from the Warsaw Film School Video Game & Film Production Studio. In it, you play as mother and son, Louise and Mitch, as they go on an adventure so Louise (who is dying of an unnamed illness) can find a home for her only son. Throughout the game, you meet a colourful cast of characters, such as Louise’s family and a woman who takes care of alligators. You’ll get chased by police, an alligator, and even time itself. Best Month Ever! offers an interesting story and a mature one at that, with certain themes being rather confronting. It’s a simple point-and-click adventure, but does it live up to its title?

As mentioned earlier, Best Month Ever! does have more mature themes. The game itself begins with a content warning, telling you right off the bat what you’re about to see. Things like offensive language, sexual themes (this is more in line with sexual harassment), and fictional depictions of racism. While they don’t show a lot, it can still become uncomfortable to play. For example, in chapter 2, you don’t have the ability to control unwanted sexual advances toward a child, and despite it fading to black, it can still be rather upsetting. With that said, a lot of the darker themes aren’t actually shown and are instead implied, allowing the player to connect the dots through conversations. The Warsaw Film School tells a well-rounded story, even with these mature themes, allowing the characters to feel a bit more personal.

A lot of the plot points in Best Month Ever! are relatable, even though it’s set in 1969. Generational trauma and generational abuse are unfortunately something a lot of people can understand, and using the medium of video games to tell a story like this is interesting to see. Obviously, people who haven’t experienced either traumatic event can still play the game, but it would mean a lot more to the players who have gone through similar situations. You’ll play as Louise throughout the game, occasionally also jumping into the shoes of Mitch. During play, you can influence the way Mitch grows up, reminiscent of Telltale’s “a character will remember this” system. Playing as Louise, you can influence the way Mitch sees righteousness (represented by a police badge icon), confidence (represented by a raised fist icon), and relations (represented by 3 people-looking icons). The choices you make throughout the game will impact his ending. In total there are 9 endings and it’s pretty easy to get the “best” ending, all you have to do is to make your choices slide to green. If you want the “worse” ending, you have to slide your conversations into the red. 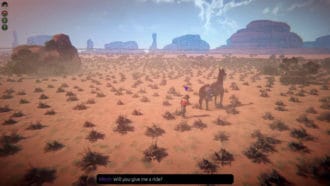 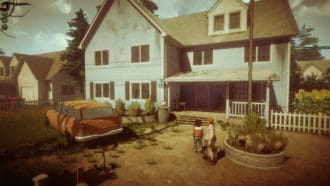 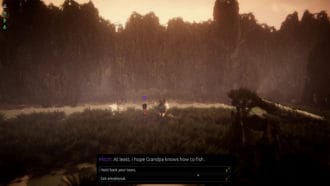 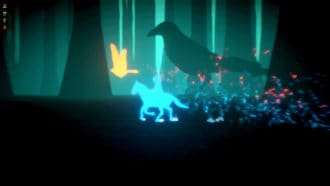 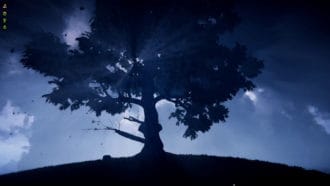 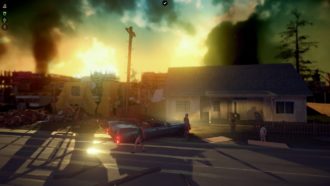 The art style is interesting with pixelated watercolour paintings as graphics. It has this almost… 2D/2.5D kind of feel to it. It’s like a diorama where the character you’re controlling is able to move between elements of the foreground. The characters don’t have any defining facial features, though it works because there aren’t any close-up shots of the characters. They still convey feelings through actions and their body language that the designers have captured well. However, some of the animations are rather clunky or awkward. In the first chapter of the game, Louise’s boss gets into a fight with her, and he slaps her. Louise falls to the countertop at the Diner and lies there still (but not unconscious) as other characters go to her defence. It feels clunky and stiff, with Louise not reacting further to the hit or the people gathering around her. In the grand scheme of things, it’s not a huge bother, especially as this isn’t a big studio, but it is noticeable and can take you out of the emotion.

Meanwhile, the sound design is pretty dang cool. Whenever you are on a level with different terrain, you can hear what type of ground the selected character is walking on. Whether it’s wading through tall grass, short grass, or dirt. There’s also the inclusion of spatial sounds too, so while Louise is walking through some tall grass on the left, you can also hear Mitch walking on rocky ground on the right. Whilst those elements of the sound design is impressive, the voice acting can be a bit awkward. One noticeable line to my ear is when Mitch and Louise are fishing and Mitch says “strike!” when you need to reel a fish in. There’s a lack of oomph to it, with the voice actor coming across more casually than what the situation needed. But overall, the voice acting is fine.

Songs for the death

Best Month Ever! doesn’t have a lot of accessibility options available. There are automatic subtitles which are awesome to see. However, there is no way to change the size of the subtitles, whether to disable them (for people who don’t enjoy them), or even have closed captions for those who need them.

“D/deaf and other hard-of-hearing folks should be allowed the same experience as hearing folks.”

Best Month Ever! does have a profanity filter, which is interesting to see and helpful for those who either stream games or upload them to YouTube. However, some swears are still hidden by asterisks even if the profanity filter is turned off. So I can hear the swears, but the subtitles don’t match up. I understand that it’s easier to put out one set of subtitles for every option, especially considering it’s not a large studio. However, it can feel as though they’re infantilising their D/deaf and hard-of-hearing audience. It’s also just… not accurate. D/deaf and other hard-of-hearing folks are allowed the same experience as hearing folks.

Other accessibility functions included are hints in dialogue and skipping quick time events. Both of which are helpful for people who forget what the task is at hand or for people who might not have fast enough reflex skills. Hopefully, with future updates to the game, we can see even more accessibility options for others.

Whilst the game is largely bug-free, I did experience some weird character movement that could be a little awkward though not game-breaking. Some of the areas to click to are kind of confusing and hard to get through. Playing as Mitch and trying to get his mum out of the water, for instance, lead to frustrating moments of incorrect pathing. There are additional routing issues due to the placement of items and it can all get a bit stressful due to the fact that the mission is timed. While they give you an ample amount of time, the issues experienced can cause you to cut it a little closer than what would be ideal.

The game has a bit of confusion in terms of its relationship with controller support on PC. I found playing with a controller to be functional yet a bit funky when trying out the game’s demo. In one chapter when you have to make up your own constellations, the analogue sticks are too sensitive and it would make things go a bit haywire. However, playing the full game, the controller doesn’t seem to work at all. I don’t know what the issue is yet and whether it will be fixed for the full release, but at least the keyboard and mouse are easy to use. As for run time, the game is roughly 3 hours, but can likely be finished more quickly if you’re not going at a slow and methodical pace.

Best Month Ever! is a lot of fun. The themes around death and trauma are hard to nail down a lot of the time, but the Warsaw Film School found a way to tell an authentic story and they treat the themes with care. While there are improvements the game could make, fans of point-and-click adventures or narrative-driven stories should still consider allowing Best Month Ever! a seat at your table.

Best Month Ever! does indeed live up to its title… except with a few pitstops. While there is some clunky dialogue and awkward animations, the game still shines through with its story and themes. Best Month Ever! tells a good story about a dying mother’s wish, with mature themes that are treated with the utmost care, and a beautiful art style. The game is lacking with some accessibility issues and subtitles not always matching up with spoken dialogue. However, with an action-packed adventure, fans of point-and-click games should pick this one up when they can. Overall, it’s a touching story that almost anyone can connect with.