Jump Over The Age

Waking up in an abandoned spaceship on the outskirts of a lawless station at the edge of an interstellar society, Sleeper discovers they’ve escaped the evil clutches of their creator Essen-Arp. However, trapped in a decaying artificial body that was never designed to attain freedom, Sleeper must find a way to survive, but who can they trust on this volatile station, and can they ever truly hide from Essen-Arp?

Citizen Sleeper, developed by Jump Over the Age and set to release on May 5 is a story-rich sci-fi RPG. Inspired by tabletop roleplaying games, Citizen Sleeper incorporates dice and time-sensitive actions that dictate your gameplay decisions and the outcome of your playthrough. Managing your health, income, and dice rolls become paramount to your longevity and ‘using your time wisely’ has never been a phrase more applicable.

Citizen Sleeper’s gameplay takes place through the top-down view of the lawless station Erlin’s Eye. All the places you can visit and actions you can take are easily navigated through this map and all of the world-building and narrative progression is explored through text-based interactions. The decision to restrict the player’s physical movement through the world means you can observe first-hand the TTRPG influences that Citizen Sleeper builds its mechanics on. 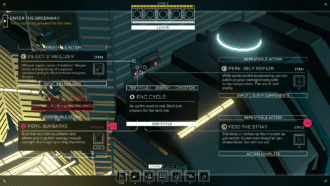 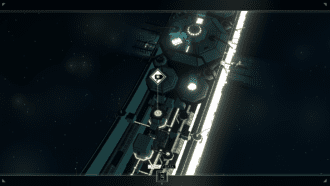 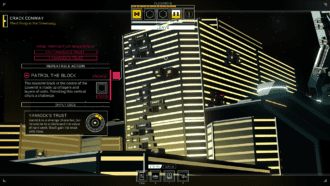 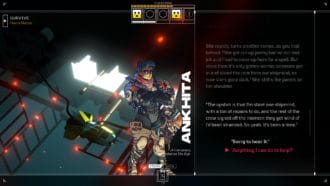 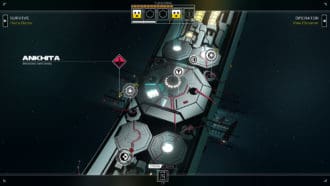 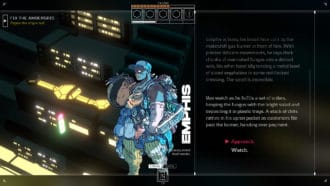 Each day on Erlin’s Eye represents a turn that players take to use their allocated five dice rolls on, either progressing sub-plots, earning money, buying food, or unlocking new areas. The regimented nature of this system means time management becomes an essential component of Citizen Sleeper. There is always a time-sensitive action that needs to be completed, never enough money or food, and never enough dice rolls to comfortably do them all. As a result, players have to prioritise and what you choose to prioritise greatly changes the endings available to you.

Personally, I was incredibly lucky during my playthrough. I consistently had good dice rolls and forgot to open up a lot of the map early on, which meant I didn’t have to juggle as many sub-plots that were time-sensitive. However, this doesn’t mean Citizen Sleeper is a relaxing game, on the contrary, the game is quite a difficult management simulation. The early game is punishing. If you aren’t using your dice rolls effectively, you will quickly run out of food and antidotes, which will quickly lead to your death. In comparison, the late game is fairly easy because you’re rewarded with mechanics and actions that make managing your well-being a non-problem. Citizen Sleeper’s difficulty curve and subsequent drop off make the game feel unbalanced because its climax is easily navigated when you have an infinite amount of money and food.

Unfolding next to Citizen Sleeper’s intricate gameplay mechanics is a complex and meticulous plot that makes the difficulty spike in the game worth it. With games turning more and more to showing world-building through graphical design, it’s impressive for a game to show this much depth through text and dialogue alone. The prose in Citizen Sleeper is simply beautiful and the writers have done a fantastic job of encapsulating the world and its varying degrees of decay. You get a sense of how fractured Erlin’s Eye has become through the different factions controlling the station and the poverty-stricken state of everyone within it. The text never feels like an information dump because of how beautifully the world-building has been integrated into descriptive language.

“The first thing you become aware of on waking is the disconnect. The delay between thinking and feeling. Between wanting to act and acting. Minor, almost imperceptible, but always present.”

Often, the writing is bittersweet and emotional. Every character has a backstory that is relatable and admirable, which makes you want to see their sub-plot through and hopefully reach a happy conclusion. The characters aren’t a tool for exposition, instead they are fleshed out and human. You become attached because of how well the writers appeal to your empathy for the character’s plights. In addition, each character feels individualised. You never repeat the same plotline and that makes exploring them all the more enticing.

One point of contention is the execution of the multiple endings available in Citizen Sleeper. With the completion of each character’s sub-plot, you are given the opportunity to end the game with that particular storyline. While the story wraps up that singular thread, you often feel that you still have too many threads left unfinished and must continue the game. This is easily done by reloading the game as it takes you back to the start of that given day where you can choose the opposing option. However, the problem arises when you get all the different endings and you’re left without a conclusive one at the end. Instead, the days on Erlin’s Eye keep going with nothing to do. As a result, the different endings feel optional and unsatisfying because you can reload into infinity and not reach a conclusion at the end once you have them all. There are no stakes involved in the endings you choose and all you feel privy to is the fact that you have all the achievements.

Citizen Sleeper is a unique and challenging game. You’re swept up in the poetics of the writing and sweating trying to manage all the different mechanics that will keep you alive. It is the perfect blend of gameplay and story because your interactions affect the story’s path so vividly. Citizen Sleeper does have balance issues and unsatisfying endings, however playing the game is so addictive and interesting that those problems become minuscule.

With its emotional story and complex management mechanics, Citizen Sleeper is a game you don’t want to sleep on. You’ll be swept away by its beautiful and harrowing world-building and fall for the characters that breathe life into this already intricate world. You will die and the learning curve is steep, however it is all worth it for the philosophical story Citizen Sleeper intends to tell.