Can one tiny change in an event completely alter someone’s life? I’ve always been fascinated with that question. If I left home for work an hour earlier one day, or if I didn’t go out for lunch that day, could it possibly vary the course my life was taking? Eternal Threads is a narrative walking sim that gives you the power to manipulate the timeline of six people’s lives in order to save them from a house fire. What elements of each person’s life need to be reshaped to keep them alive? Only you have the power to find out.

The Second Chance Project is an organisation whose aim is to right the wrongs caused by early time travellers. They believe that “nothing is insignificant” and they must “surgically alter the past” by using “caution.” For you, the employee Operator 43, this means that you have access to the events leading up to the fire, but you cannot simply extinguish the flames and save the six housemates. Instead, you need to get to know these six people, their lives, and their personalities, and decide what the best decisions need to be made in order to save them from peril. The Second Chance Project believes in you enough to let you travel back to 2015 and into the burnt structure with the ability to alter each person’s timeline at your disposal.

This power comes via a portable handheld device that lets you replay the moments leading up to the fire in the rooms they actually occurred in. Your movement is restricted to within the house, but this doesn’t limit the narrative; it actually puts more of an emphasis on the importance of your surroundings. The house is very much the seventh character of the game, with the decisions you make for your characters leading to moments when the house is altered slightly, such as the unlocking of a door.

The characters in Eternal Threads are varied in personalities and in the goals that they harbour. The first you meet is landlord Tom, who is struggling to let go of a toxic ex. His tenants include couple Ben and Jenny who are both keeping important life-altering information from each other and Jenny’s best friend Raquel who is dealing with some serious childhood trauma. Then there is Neil, the youngest, who is dealing with anger issues whilst his sister Linda is temporarily staying in the house for a few weeks to have a breather from her failing marriage. Each of these characters are holding something tight to their chest, whether it be their true feelings, past trauma, or secrets, and it’s up to you to work out what these things are.

What is so impressive about Eternal Threads is that getting to know its characters is like getting to know any person in real life. You can choose to get to know someone on a simple surface level and only see what they present to the world, or, if you find them interesting, spend more time with them to uncover what really makes them tick. The game rewards you by exposing further character traits and inner thoughts of characters by playing around with their lives instead of just taking the easy, simple route. I ended up saving a character’s life early on in the game and I could have easily skipped over all the events containing that person. However, by continuing to delve into their memories, the game rewarded me with deeper storylines and connections with the surrounding characters.

To experience these memories, you select them from the timeline that shows exactly where in the house the event took place and which characters were involved. Sometimes these images can look a bit janky, with limbs seeming a bit too long giving some characters an alien type appearance. This wasn’t a game-breaker, however, and other elements of how you interact with the images, such as being able to walk around and see them from different angles, is a nice added bonus. What isn’t added and can get annoying is the inability to fast forward, rewind, and pause. This can be frustrating especially when you are replaying the scene to pinpoint a particular moment of the memory. When the event is selected, it is played out in front of you like it is being televised via an old projector. The memory’s grainy, static appearance adds to the game’s premise that these events are malleable and fleeting. The slightest alteration of one of them could lead to a dozen scenarios being locked to you.

“The memory’s grainy, static appearance adds to the game’s premise that these events are malleable and fleeting.”

If you choose for a character to drink knowing they have an important job interview the next day, some elements of their day may no longer occur. These memories become unable for you to access unless you once again change your decision and decide to keep the character sober, which will then unlock the memories associated with this timeline. This drinking example would fall under the category of “potential corruption point” and is highlighted on the timeline. Once you have chosen from two alternatives, you have the power to go back and alter your decision as many times as you like. You can do this by replaying the event, or by simply choosing option A or B from the timeline menu. Events then lock and unlock before your eyes, making some scenarios locked whilst others available, some for the first time.

Changing the simplest action may just lead to a character’s life being saved. Your device announces this to you, and you also see a beating heart next to the characters you have saved on the timeline. You can also work to get the “true” ending for each character, which is represented by the heart being coloured in and including a tick. Along with this extra ability, there are other elements of the gameplay that keeps you wanting to explore your surroundings further. Certain doors will remain locked until you find the right conversation or item that will lead to a key or combination code that will gain you access. Also, there is one storyline that becomes quite meta that I won’t spoil for you. Just trust me in knowing that the game has additional facets that will keep you guessing and wanting to dive deeper into the lives of the six characters and the interconnected world they have created within the scorched structure. 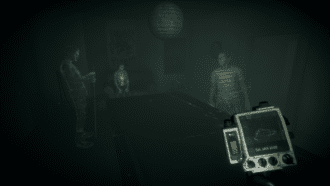 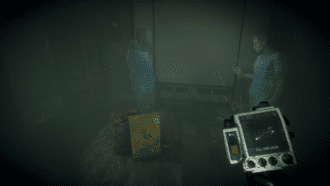 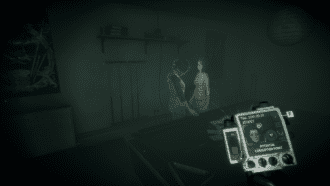 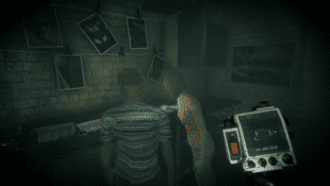 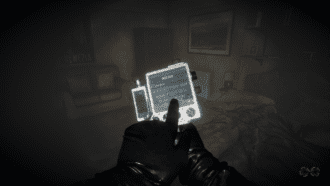 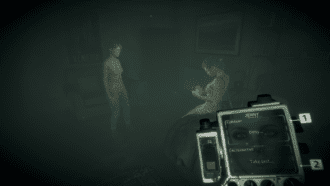 Eternal Threads, at its core, is a story of six people sharing a home and experiencing pretty day to day problems. However, with the added element of time travel and the game’s emphasis on nothing being insignificant, you become invested in the way the characters’ lives play out and the choices you make for them. I found myself cringing when the characters made a mistake, feeling bad when I chose a path that hurt them, and rejoicing when they finally found peace. Due to the way these characters are given believable backstories and personalities, I took the power of having their lives in my hands seriously and made sure that my six new friends received the past and future that they rightfully deserved.