If you’re all about going with the flow (where the flow hurts you sometimes), then allow me to introduce Loot River—a tense roguelike that floats somewhere between a Souls game and Tetris. Developer straka.studio have made an innovative take on an already well-established indie genre, a new venture for a team mostly known for its bright AR puzzles and turn-based mobile titles. But does Loot River leave you up the creek without a paddle or does this fresh spin on the rapids have what it takes to flow like water? Take the plunge and check out the trailer below.

In Loot River you play as a nameless warrior found floating through a procedurally generated Labyrinth. With the power of an ancient relic, you are able to control the platform you stand on and move freely in the water as you push deeper. As if that wasn’t enough, you’re also fighting a horde of enemies that stand in your path. It’s essentially a top-down hostile Tetris hybrid, though not nearly as colorful. Along the way, you meet a broad roster of characters, many of which take up residence in the game’s hub—the area that you return to in between sections of the run.

Iphis is the first NPC you meet and she kills you. It’s only after her doing so that you realise you are now trapped within the game loop. Each time you die, you awaken in a parallel reality anew. Then the game continuously lets you throw yourself into the river as you grind and push further into the depths. It won’t be long before you come up against truly fearsome bosses, each looking to see your run drown in the murky abyss. But at least dying only means you’ll be moving onto a new timeline. 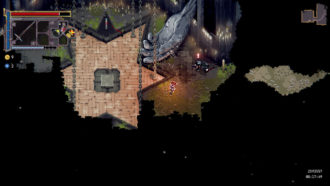 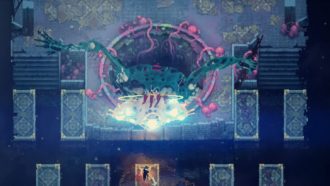 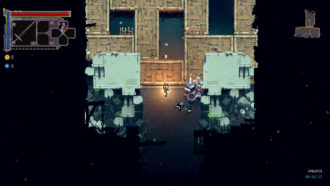 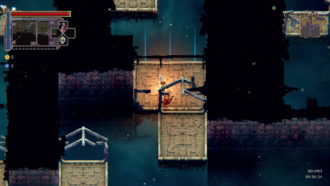 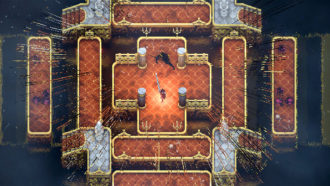 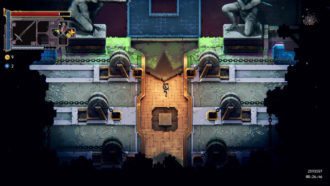 From that first death until the very end, Loot River promises an adventure. In true soulslike fashion, much of that story is inaccessible to the player. That air of grandiose storytelling is so enthralling and yet it’s used very sparingly. All of the story is revealed by the NPCs you come across, so while the narrative is present, it’s more of a passive approach. This isn’t a Hades copy that wants you to play multiple runs in order to build that story over time. This largely works for the game, allowing the player to fill in the murky sections with their own assumptions and guesses. That said, I think Loot River would’ve benefited from more defined story beats that fit around its core mechanics.

Having to control the platform you’re on is quite a ride, especially at first. It allows maneuverability but with an unwieldy control feel that shouldn’t be allowed in procedurally generated dungeons as you move from platform to platform dodging all manner of foes. It does however mercifully allow players to not be able to fall from the floating platforms. So when you and the platform are moving, you won’t fall off and die, or worse yet, have to swim. The platform also allows you to corral enemies so as to avoid taking damage. Control issues aside, it is a fresh take on the genre and a uniquely engaging one at that.

“The loot in this game is begging to be randomized…”

To protect yourself, the player can parry and strike with both a light and heavy attack that can be charged. You are able to carry and wield two weapons that are equipped with their own powers and modifiers. As the game progresses and you get deeper into Loot River, you’ll unlock more weapons that are then added to the loot pool of the game. This is a cool concept but feels very impractical because of its random nature. It’s also difficult to grind for the points required to open the loot tree system up, which isn’t easy in a roguelike. The loot in this game is begging to be randomized with easier access to the full roster of weapons. There is nothing worse than messing up a run and having to grind for the upgrade points once again!

Loot River features detailed pixelated backgrounds and slick character design that nicely display the care and time that has gone into the game’s visuals. The environments are carefully created, so they never appear to look procedurally generated even when the block placings are a little weird. I will say that considering this game is called Loot River, the river is only present as a static body of water. It’s pretty water, but that’s all it is as you move the platform through the areas. It also feels for the most part quite cramped, and with the black surroundings, it does begin to give the impression that the game is discouraging true exploration.

This somewhat suffocating visual language combines with procedural loops to make Loot River an initially fun experience that quickly begins to grind. I’m not afraid of a difficult game, especially when it’s replayable, but I think Loot River just assumes that I’ll have fun replaying the procedurally-generated dungeon every time simply because it looks different. Unless I have the motivation to keep grinding the run for new stuff to be added to the loot pool, I’m not going to see much cool new stuff on my run. I think if they were to randomise the loot it would feel a lot more fun because we wouldn’t know what we were going to find. There would be something else that isn’t ‘get to the end of the level’.

With all that in mind, Loot River is an interesting new take on roguelikes with that spicy soulslike twist that I wasn’t at all expecting. What looked like a trip down the rapids turned out to be a tough slog upstream. Its difficultly is your main opposition and even when your run is going well, it can feel like the opposite in the thick of it. I’m hopeful with time we’ll see this game be improved. I can’t say I’ll be keen to float again, without significant changes to the difficulty, loot system, and progression. The current could be so much stronger with time to develop and build a river-worthy vessel.

Loot River is certainly a roguelike unafraid to explore new waters, but what it lacks is a refined loop. Constantly repeating the run, even in different dungeons, isn’t an easy concept to float. However, the game’s unique movement mechanics and visuals do a lot of work to sell the experience. If you’re looking for a roguelike that’s going to punish you, then check this one out, but try not to be too shocked when you realise there are no life jackets provided.