Souls-like games truly are a dime-a-dozen these days. After the success of From Software’s flagship series, Dark Souls, and the subsequent smash hits Bloodborne, Sekiro: Shadows Die Twice, and most recently Elden Ring, the genre is well established as one of the most dominant and popular flavours in the current market. Alongside these large, sprawling 3D beasts are a humble smattering of 2D games that echo the same game design sentiments: overcoming immense challenge, decisive gameplay, and cryptic world-building. One such game that stood out among the crowd in the 2010s Souls-like boom was 2016’s Salt and Sanctuary, a game that took the Dark Souls formula and spun it into a Metroidvania-styled package that worked stunningly. 6 years later and Ska Studios have put out their follow-up: Salt and Sacrifice.

I’ll cut right to the chase here: Salt and Sacrifice leaves a bit to be desired. Straying somewhat from the true Souls-like by diving deeper into the Metroidvania vibes and taking influence from Monster Hunter, the game fails to uphold the strength and impact that its predecessor achieved. Taken at face value, the game presents a captivating premise: the kingdom’s peace is threatened by the arrival of evil creatures of pure elemental malice: Mages. By joining an organisation called the Marked Inquisition, it is your job to hunt these Mages down and cease their incursion upon the lands.

While this setting is engaging, and the initial run into the first area is enjoyable, the repetitiveness of Salt and Sacrifice settles in very quickly. As someone who could never get into the Monster Hunter loop, and perhaps wrongly assuming the game would be more Souls than it is, I was quickly tired of the rinse-and-repeat method of Mage hunting. Perhaps most frustrating is the physical hunting of these Mages, as they have a nasty habit of teleporting all over the shop, resulting in long stretches of pursuit.

The boss designs are varied and interesting, with a variety of elemental aspects strongly in play to encourage changing builds and crafting new weapons. While this can give some variety in your gameplay, Salt and Sacrifice seems to pigeonhole your character based on your initial class selection, which makes engaging in different playstyles difficult and somewhat locked away. Unlike some of the other behemoths of the genre, in which your character is a canvas for experimentation and trial-and-error, Salt and Sacrifice is lacking in this department.

As is commonplace in the genre, there is a hub area in which your character can craft, shop, level up, and engage deeper with the game’s characters and wider lore. There is a small cast of characters in Salt and Sacrifice, most without any real depth, but I found returning to this area after each successful hunt and chatting with the locals to be a welcome respite from the repetitive gameplay and a good source of context and world-building. The levelling system is close enough to Souls to be familiar – spending ‘Salt’ to gain levels and investing the resulting materials into a skill tree. These allow you to spec further into attributes that benefit your class; for me, investing heavily into Dexterity meant my samurai-styled character dealt more damage.

Combat in Salt and Sacrifice will be very familiar to fans of the Metroidvania genre, with actual combos being quite simple and rudimentary while supplemented with various tools and ranged weapons. These include a bow, crossbow, and various items like firebombs and poisons. As the game takes from both Metroidvania and Souls-likes, the simple combat is quite challenging, and I often found myself relying on all the available tools to overcome the enemies in front of me. Difficult combat on a 2D plane is a struggle in and of itself, and I often found myself lobbing firebombs and firing arrows in the wrong direction as my inputs became rushed and frantic.

The game also conveys a level of grindiness and over-gathering of items that fails to ever really feel beneficial. Gaining levels requires hefty amounts of Salt, and crafting items never feels like it gives you the advantage I would have liked to have seen. Indeed, even after levelling up to 20 by the 2nd area of the game, I felt like everything still posed a major challenge.

The visual style of Salt and Sacrifice is very similar to its predecessor, with painstaking detail being put into the individual character sprites to create a vibrant and expressive visual palette. The creators hand-drew and hand-animated everything on screen, and this attention to detail can be seen in the moment to moment gameplay. In a game where I was not overly impressed with the gameplay, I was definitely stricken by the captivating visual style.

“In a game where I was not overly impressed with the gameplay, I was definitely stricken by the captivating visual style.”

My biggest gripe with Salt and Sacrifice is how massive the areas are and how cumbersome they are to traverse. As you progress in the game, you unlock tools to make travel easier, but the game never gives you a map, which in a game that is taking so much influence from Monster Hunter is a huge miss. Long stretches of chasing down bosses who like to hightail it out of dodge, and not having access to a map to see what might be ahead of you, is supremely frustrating. Bosses spawn their own elemental minions that fight you alongside the ambient mobs that already exist in each zone, so combining these with the sense of urgency to chase down the boss and getting lost and running around blind led to many swear-filled fits of rage. 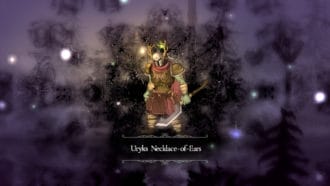 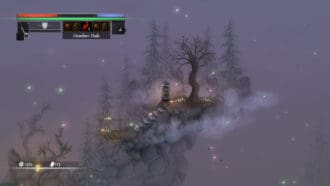 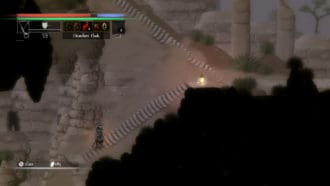 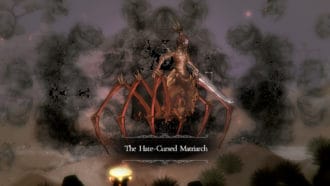 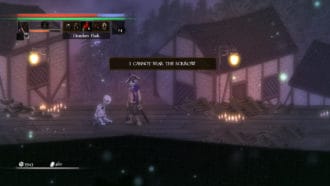 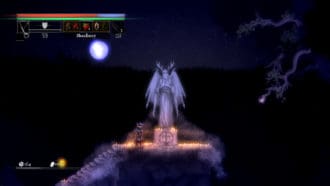 Taking each piece of Salt and Sacrifice on its own, the game really should be an incredible ride. Taking the Souls-like gameplay loop, injecting Metroidvania style progression and item use, and stirring in some Monster Hunter elements should make for a delicious, challenging experience. Instead, the game unfortunately boils down to a repetitive, grind-inducing slog through samey areas and against predictable bosses. Ska Studios deserve praise for their attention to detail, striking visual achievement, and the game’s lofty ambitions, but that simply is not enough to stand up against some of the other titans of the genre.