Explore bewitching forests, snowy peaks, and the world of spirits on your way to save your village in Skábma – Snowfall, a new narrative-driven platforming adventure from Finnish developers Red Stage Entertainment. Showcasing beautiful environments and a unique ‘spirit drum’ mechanic, this title sets out to explore stories from Sámi culture through environmental puzzles and exploration.

Corruption has been spreading across the land from deep within the earth, infecting plants and animals. As reindeer-herder Áilu, you discover an enchanted drum left by the Noiadis, healers in Sámi culture. Designs on the drum depict four familiars, which you must seek out and gain the aid of to become a true Noiadi yourself and prevent the spread of disorder. While the plot feels familiar in its story beats, it’s refreshing and rather special to experience a tale based on stories from Europe’s northernmost indigenous culture. All of the voice acting is entirely in Northern Sámi and includes some stunning joik-singing performances from Hildá Länsman.

Finding and cleansing the Sieidis (sacred stones) of the four familiar spirits grants you access to a new ability. Each of these has a secondary effect when activated while playing the drum. The Owl allows you to dash and create wind currents, the Bear can create earthen boulders and break walls, the Trout provides a shield and heals corruption, and the Fox lets you double-jump and start fires. Most of the story is framed around finding the familiar spirits, which serve as clear markers of progression as well as augmenting your abilities. Only the movement-based abilities get any significant usage, with most environmental puzzles requiring you to dash and jump around between platforms or air currents. It’s a shame that the other powers aren’t used as much but the freedom of movement gained from the Owl and Fox’s blessings is very satisfying. If you can get used to the quirky controls, it feels great to glide across the side of a mountain, reminiscent of aerial-heavy 3D platformers like A Hat In Time.

Skábma’s presentation is simply gorgeous. The landscapes are colourful and stylistic, with the lighting palette proving particularly stunning. Exiting a cave and staring out across a mountainous vista is a constant delight. Magical effects are also beautifully realised and add a sense of wonder to Áilu’s abilities. This does come at the cost of performance, with the frame rate plummeting in cutscenes and when the screen gets busy, but the tradeoff is worth it and rarely impacts gameplay. Unfortunately, the same cannot be said for the game’s camera, which requires constant babysitting with the right stick lest it clip into a wall and disorient you. 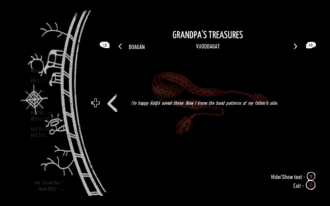 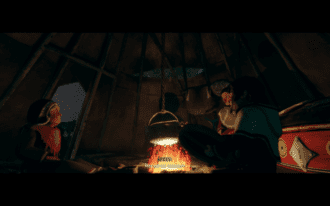 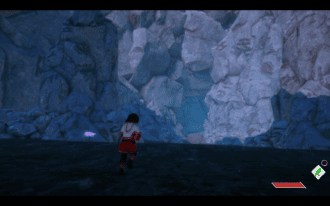 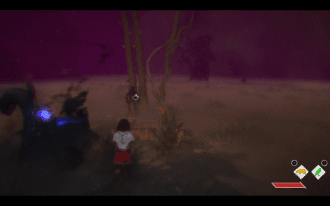 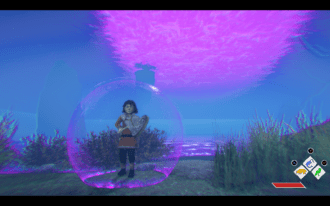 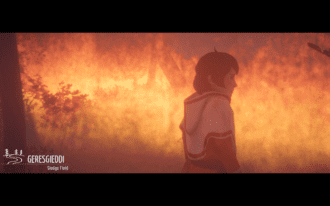 Similarly, some odd decisions regarding the control scheme tend to get in the way. Abilities are activated with face buttons, but you need to hold one of the bumpers to play the drum in order to activate their secondary effects. This leads to a lot of fumbling when trying to chain dashes and jumps with creating boulders to land on or wind currents to ride, particularly since you can only have one secondary effect active at a time per familiar. None of this is helped by all of the camera-wrangling and it leads to some frustration in sections where tight movement is required. It’s a good thing that dying simply respawns you at a checkpoint, since there is a tonne of trial-and-error platforming. I should also note the frequency of weird collision glitches – you can get stuck on ramps, rocks, and invisible walls, causing you to be teleported to the nearest checkpoint.

Unfortunately, this isn’t where the frustrations end with Skábma. While the environments are gorgeous, navigating through them to find the next story objective is incredibly difficult. Áilu’s drum provides inconsistent guidance (often leading you to an optional collectable rather than your goal) and the indistinct natural biomes are easy to get lost in. This is a frequent and critical problem. The first major roadblock comes in the form of a massive swamp, filled with vision-obscuring fog and mud-monsters. Man, f**k that swamp. You’re trying to find a path through deadly sinkholes, using the Bear familiar’s rock-making power to create safe platforms – only you can’t see the platforms, and they’re all slightly higher than your jump height from the ground meaning you need to time jumps perfectly or fall to your doom and go back to the start. Upon reaching what seems like the only path forward, you find a collectable and a dead end, forcing you to go back into the fog and start again. Maddening.

In fact, my nine hour playtime on Steam is padded out by at least four hours of being stuck – not from inherent difficulty, but from lack of clear direction as to the intended critical path. During one chapter I was so lost that I needed to contact the publisher to ask for advice, and their solution was so incredibly unintuitive that it completely changed the way I played the rest of the game. I had previously been trusting the developer’s design and respect for player intent (for example, gaining the Fox’s double-jump implies the next path is accessed through double-jumping). After this roadblock, I never again felt comfortable that I was going the right way. I couldn’t immerse myself in the narrative or explore for collectables for fear of missing a vital bridge or cave needed to continue the story. 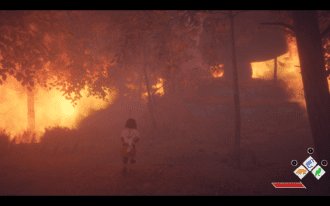 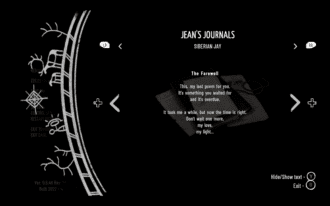 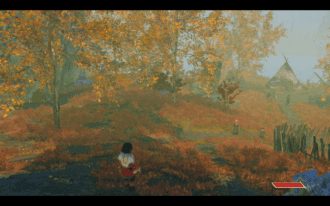 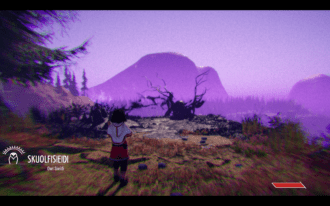 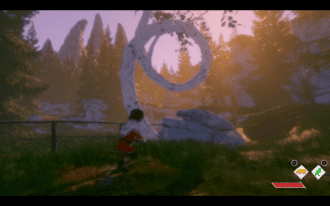 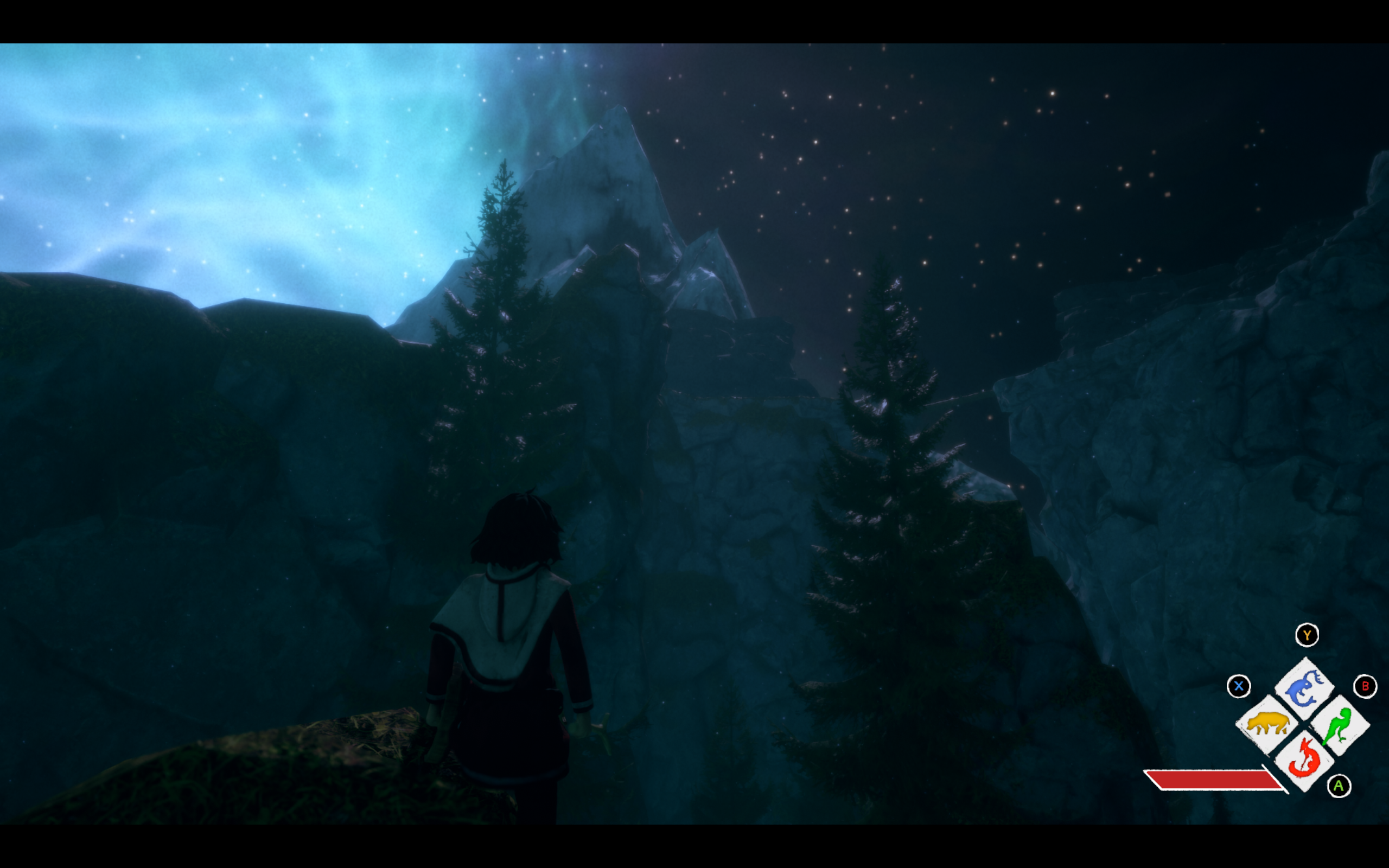 This feeling was unfortunately warranted, since I got frustratingly stuck multiple times after this roadblock, including during a tense chase sequence that included a horrifically graphic death as punishment for being caught – which I had to watch a lot. These roadblocks severely hindered the pacing of Skábma’s narrative, which otherwise delivers some sweet moments of character interaction and development. The journey to find the spirits is compelling and it’s intriguing to gradually discover more about the characters in Áilu’s village (particularly a mysterious friend who is investigating the mythical Stállu). The ending, however, doesn’t really provide a satisfying resolution. Instead, after a pretty cool “boss fight”, you’re presented with a confusingly sudden finale and a teaser for a sequel.

I should note that the developers have since released patches that address some of the critical issues – the drum apparently provides more detailed guidance now, which would have gone a fair way to help the pace. Unfortunately, the build I played for review was frustrating at too many points to be wholly enjoyable. Let’s hope that future updates can get Skábma closer to the unique narrative adventure it wants to be.

Despite an absolutely stunning visual design and an imaginative interpretation of Sámi culture, Skábma – Snowfall is let down by some frustrating design decisions. Its cumbersome control scheme and lack of guidance between story objectives lead to gameplay roadblocks that hurt the pacing of an otherwise compelling narrative. While it stuns with its gorgeous landscapes and presents interesting (if underutilised) ‘spirit drum’ mechanics, it’s difficult to recommend Skábma in its current state. I’m looking forward to seeing Red Stage Entertainment continue to support the title and bring out its strengths.