Warhammer 40,000: Chaos Gate – Daemonhunters is a single-player turn-based tactical strategy game developed by Complex Games and published by Frontier Foundry. It’s the latest video game entry in the Warhammer franchise and comes with a lengthy single-player campaign and four difficulties to choose from: merciful, standard, ruthless, and legendary. While the merciful difficulty will grant you extra units, the harder ones come with more powerful enemies strengthened by several buffs and bonuses. The campaign also features an additional Grand Master mode where manual saving has been completely disabled.

Set entirely in the 41st Millenium, Warhammer 40,000: Chaos Gate sees you controlling the Grey Knights, a secret chapter of Space Marines tasked with holding the monstrous Daemon forces at bay. Clad in bulky metallic armour and equipped with deadly weapons, these soldiers serve the Emperor of Mankind and fight corruption on different planets. As expected from any Warhammer video game title, Warhammer 40,000: Chaos Gate comes with a layered story that taps into Warhammer’s rich lore.

At the start of a playthrough, you’ll be catapulted straight into the main story through the game’s opening cutscene and tutorial. Controlling a Grey Knight Commander named Agravain, you find yourself in the middle of a space mission gone awry. As Agravain and his companions touch down on a planet infested with servants of the blood god, Agravain manages to kill the daemon responsible for the corruption after mounting an impressive offensive. Unfortunately, however, he doesn’t live to tell the tale. With Agravain gone and the team’s spaceship heavily damaged, there’s need for a new commander to step in: you! Once the tutorial wraps up, you’ll discover that your ship is in dire need of repair. However, before you can tend to the ship, your journey is interrupted by the arrival of an inquisitor named Vakir, who has found proof of an increasingly worrying Nurgle plague, known as The Bloom, which is spreading across different planets. Under Vakir’s leadership, your units are tasked with exploring different planets to collect the seeds responsible for the spreading corruption.

“…the game’s dynamic environment… makes for engaging missions that will keep you entertained for hours on end.”

Practically, the initial tutorial does a great job illuminating the game’s core combat mechanics and raising the stakes of the story. The cutscene’s graphics are incredibly detailed and beautiful to look at. On the surface, Warhammer 40,000: Chaos Gate’s core gameplay mechanics will feel familiar to any strategy fan. Similar to other titles in the genre, battles are contained in missions where you play on a battle map. In between missions, you can upgrade your troops, tend to your ship, and talk to characters on your crew. Battles are turn-based, and units come with a set number of action points and will points per turn. These action points can be used for actions like moving across the map, reloading weapons, and setting an overwatch zone. Will points are used for special psychic abilities, which can only be used by a unit once per turn, and cost both action points and will points. While psychic abilities may be costly for a unit to use, the ability in question can include anything from teleportation to healing abilities and can often turn the tide of battle when used strategically.

Where Warhammer 40,000: Chaos Gate might differ from games like XCOM and align itself more with titles like Gears Tactics is through its movement mechanics. Unlike the classic turn-based formula where you move units across a grid, you can choose to use your action points in order to use abilities, mount attacks, or move units across the map in whatever order you desire. Each mission map also comes with a range of objects that can be used to your advantage; pillars can be cut down to crush enemies, explosive crates can be blown up, and more. Executing enemies will also grant you bonus action and will points, meaning strategically delivering the killing blow to an enemy can make a huge difference in battle. On top of this, battles also come with a ‘bloom’ timer, showing the percentage of corruption of the planet where you’re completing a mission. With every passing turn, this percentage increases. If it hits 100% before you wipe out all enemy units, every enemy unit will receive a random buff in battle. This, coupled with the game’s dynamic environment, makes for engaging missions that will keep you entertained for hours on end. 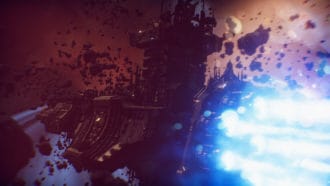 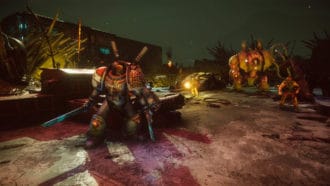 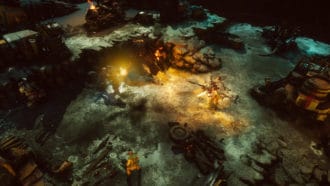 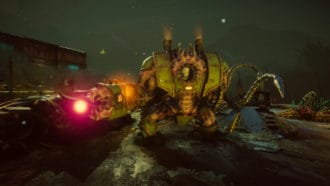 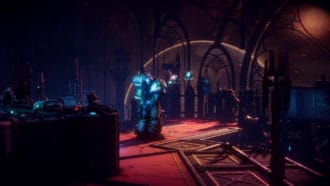 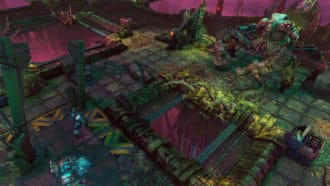 The game offers plenty to do in between missions as well. Off the battlefield, you’ll be spending your time aboard the Baleful Edict spaceship, which essentially means you’ll be upgrading your ship, troops, and abilities in dedicated menus. Each menu takes you to a different area of the ship where you’ll be able to study relevant skill trees for your unit abilities, ship upgrades, or research. You also have the option of talking to various crewmates depending on what area of the ship you’re in: for ship upgrades, you’ll have to talk to a tech-priest named Lunete, Vakir will take you through anything related to research, and Ectar, your second-in-command, will help you with any upgrades to your barracks and armoury. Any conversation with a crewmate can also trigger a longer and more detailed story cutscene. Missions can be started from the Baleful Edict’s star map, where you can choose to travel to different planets by advancing time. This allows you to see different missions pop up on the map, while also passing time to unlock pending research and ship upgrades. Depending on the planet, new missions might pop up in various places, all with different degrees of corruption. If no missions pop up at all, you’ll have to keep advancing time until they do.

While I greatly enjoyed the added menus that allow you to explore the spaceship, I found the star map a bit of a clunky feature, especially when there were no missions to be completed. Upgrading the ship and barracks is enjoyable, but it feels very much secondary to the missions where you actually get out on the battlefield. Advancing time, particularly when there are few to no missions popping up, feels like a hindrance rather than a feature, and it can interrupt the momentum of a great gameplay experience.

That said, overall, Warhammer 40,000: Chaos Gate – Daemonhunters is an impressive feat that offers an unusual amount of story depth for a strategy title. Warhammer fans in particular won’t be disappointed; without wanting to spoil anything, there’s a beefy story with plenty of cutscenes, all featuring suitably badass characters, enemies, and signature Warhammer-style bombastic dialogue and battles. All up, that’s worth waiting for, even if you’ll have to advance time for a little while.

Warhammer 40,000: Chaos Gate – Daemonhunters is an impressive strategy title. With gorgeous graphics, a robust story, and engaging strategy gameplay, its single-player campaign will be a joy to play for strategy fans. The game may have some missteps, but the number of missions and additional ways to upgrade the Baleful Edict keep things interesting for seasoned strategy veterans and newbies alike.