Winter Ember wastes no time throwing you straight into the action with its suspenseful opening sequence. After arriving home with two female companions, Arthur Astorias is confronted by his father who gives him a disjointed monologue about running out of time. Shortly after, a gang of masked burglars break into the Astorias family mansion in a haunting scene and kill everyone in their vicinity. They finish their killing spree by setting Arthur on fire. Fortunately, Arthur is rescued just in time by the only other survivor, one of his female companions named Vesna. After escaping the mansion severely burned but alive, Arthur is nursed back to health by Vesna. When you begin the actual game, eight years have passed since the game’s opening cutscene, and Arthur is ready to avenge his family. He sets off on a journey back to his home city, looking for answers.

At the start of a playthrough, you quickly discover that it’s risky for Arthur to be discovered. So, the only solution at Arthur’s disposal is to explore his surroundings at night, sticking to the shadows and sneaking past guards wherever he can. Practically speaking, this translates to a lot of stealth gameplay. Like other stealth titles in the genre, players have the option to sneak around silently, attack guards directly, knock guards out, or kill them in one fell swoop with a sneak attack. You can also take cover against walls and peek through windows to see what lies ahead. Weapon-wise, you’ll have a bow and a sword at your disposal. The controls are pretty standard and straightforward for both weapons – aim and shoot for the bow, parry, dodge, block, and attack for the sword. If Arthur gets wounded during combat, this can cause a bleeding effect and you’ll need to remedy this with bandages. If you don’t have any bandages handy, Arthur’s health will drop mighty quickly. His attacks also won’t do as much damage compared to when his health bar is full.

Winter Ember’s core gameplay is standard fare that will be recognisable to any strategy and stealth game fan; a flashing red mark will appear at Arthur’s feet whenever he’s spotted by a guard (meaning there’s only seconds to act before the guard will attack) and killing a guard or leaving one unconscious in the middle of a hallway will arouse the suspicion of other guards nearby. It’s crucial to erase as many of your traces as you can while exploring. Like in Weird West or the Desperados series, you’ll occasionally find cupboards and chests allowing you to hide a body when sneaking through mansions, squares, and streets. As you explore different locations, the core mission objectives are updated automatically through a journal that you can access via your inventory screen.

“Exploring the hidden nooks and crannies in different locations is incredibly enjoyable.”

In-game levels correspond with locations and big stages in the story. When you start a playthrough, for example, you’ll find yourself on a jetty in Port Alexandria, far away from your former family home. To find your family, you’ll need to make your way to the city of Anargal, so the first level sees you traversing a map to locate an Anargal-bound train. Once you’ve located the train and secretly slipped onboard, you’ll be taken to the next level which takes place entirely inside a set of moving train carriages. In turn, these levels are interspersed with more cutscenes that further Arthur’s story.

Visually, the game’s settings and locations look great, and the dark late 19th-centry visuals nicely complement the game’s universe and storylines. The moving train carriages were a particular highlight and made the gameplay feel suspenseful and dynamic. Other locations in the city of Anargal looked suitably moody too, and locations like the Crab Meat Bar – a gorgeous Victorian-era tavern – easily draw you further into Winter Ember’s world.

Unfortunately, in comparison to its graphics, the game’s combat mechanics don’t always measure up. Combat can feel repetitive, which is not helped by the fact that a lot of the guards look identical. Combat controls can feel clunky sometimes too. For example, to draw your weapon, you need to press E. Quite a few times, it took Arthur a ridiculously long time to draw his weapon, and, considering that time is of the essence when being attacked by guards or sneaking around within a mansion, this made gameplay feel frustrating rather than enjoyable. While you do have a skill tree available to upgrade Arthur’s weapon skills – upgrades include things like breaking an enemy’s block quicker, or having Arthur draw his weapon a smidge faster – these didn’t seem to make a huge difference to the gameplay practically.

Where the game did prove to be a lot more engaging was through its exploration and arrow mechanics. Through a dedicated crafting screen in your inventory menu, Arthur is able to craft blunt arrows, as well as arrows with a clawed arrowhead. These arrows allow you to break barriers and shoot arrows towards ledges with a rope attached, which in turn allows you to climb up onto the gutter of a building, access hidden areas, or climb up to the attic of an interior location. 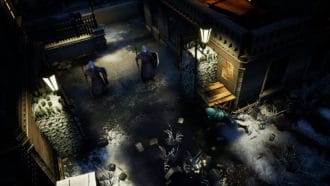 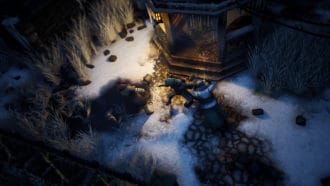 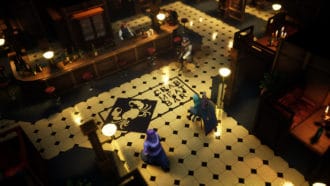 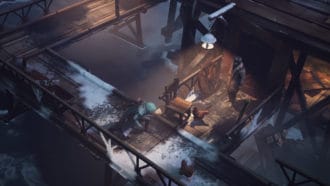 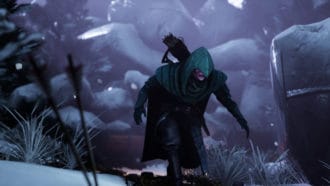 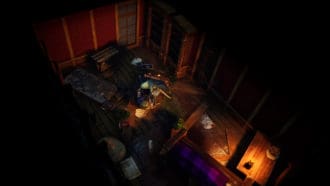 Exploring the environment’s hidden nooks and crannies in different locations is incredibly enjoyable and felt very apt for a game with such a suspenseful main storyline. Without wanting to give too much away story-wise, players will quickly discover that Arthur’s family history is a lot more complex than initially anticipated, and the city of Anargal hides a lot of dark secrets. Story cutscenes are animated in the classic anime-style, complete with dramatic cutaways and plenty of characters making intense eye contact. Even though the story tips over into soapy territory at times, it all helps shape Winter Ember’s mysterious setting and story further.

One of the only story areas that felt like it needed more polish was the voice acting. Arthur’s voice rarely sounds animated, and even when he’s confronted with arch enemies or friends he hasn’t seen for years, he manages to sound abnormally deadpan. The other characters come with similar sleepy voice-over performances that bring down the overall tension of a scene. Considering the dramatic animation in the game’s cutscenes was such a highlight, having the voice-over fall flat felt like a missed opportunity.

Overall, though, Winter Ember is an enjoyable adventure that will appeal to fans of Sherlock Holmes and Desperados alike. If you don’t mind a bit of naff voice acting and enjoy sneaking around different settings more than engaging in combat, you’re sure to enjoy a playthrough of Winter Ember.

Winter Ember presents players with an engaging story and plenty of interesting levels to explore. While its combat can feel repetitive and the voice acting could be polished a lot further, overall the game offers some fun stealth mechanics that will be entertaining to fans of titles like Weird West, Desperados III, and Sherlock Holmes.