Gibbon: Beyond the Trees Review – Save the planet of the apes

The most important part of Gibbon: Beyond the Trees – indeed, its best part – is the pointed message about deforestation and the destruction of habitats and their heartbreaking impact on endangered animals. The game’s not strictly an endless runner, but draws enough inspiration from the genre to make the comparison. The background constantly scrolls towards the right, as you control a gibbon who swings and dives through the lush treetops they call home. That background quickly grows darker, as nature gives way to sharp machines and cruel humans. The game has several mechanical and technical issues, but at just over an hour long, it’s hard not to recommend.

Due to its brevity, I’m hesitant to say much about the story. You play a pink gibbon who lives in the jungles of an unnamed South East Asian nation with a yellow gibbon and a baby purple gibbon. The three gibbons live peacefully among the trees, then the story gets going. The game gets through a detailed narrative with absolutely no dialogue, just actions. It’s not groundbreaking, but it is deeply affecting. Developer Broken Rules should be commended for how much nuance they were able to pack into such a small package, as well as consulting with organisations working to save the environment in parts of South East Asia during development.

The game uses gameplay to convey narrative elements and character personalities in simple yet effective ways. Pink isn’t afraid to charge ahead into potentially dangerous situations, shown by how you’re able to play them, and Yellow will wait for you when you lag behind, reaching their arms out for you to grab and perform an extra jump, showing that there is love between these two primates. Once you first start encountering humans, the game wastes no time emphasising how terrifying they are. You never get an ounce of compassion from them; disinterest at best, violence at worst. The background continually scrolls away from the greenery these creatures call home. As the player, you can’t go back, but neither can they.

Unfortunately, this reciprocity between themes and mechanics continue through Gibbon: Beyond the Trees’ less favourable elements. As the gibbons’ world and lives get worse, so do the controls and frame rate, and not in a way that feels intentional.

The control scheme is unique, and innovative on paper, especially compared to other games Gibbon: Beyond the Trees is mechanically similar to. Pink automatically walks by default, but holding down one button lets you swing indefinitely across branches and other surfaces, and holding another button lets you run across them. Letting go of either button lets you jump. For most of the game, the aim is to smartly use your abilities to gain as much momentum as possible. There are no lives, no collectables, no optional objectives, but just enough playability to last the story that Broken Rules want to tell you.

But the control system is more complicated than just pressing two buttons. You are told up top that running reduces your momentum, unless you run down an incline, which turns it into a fast slide. You also need to let go of the swing button a little bit before the end of a branch, or you will lose momentum. You need to be precise about what you grab, because there’s a chance you’ll snag yourself on the canopy, which – you guessed it – reduces your momentum. There’s lots of interesting mechanics at work, but at times they were too unwieldy considering they only lead to one of four effects: going up, going down, going fast, or going slow.

I admit that I am bad at these controls. I kept forgetting to let go of the swing button and would sadly slump off the end of a branch. I found myself accidentally jumping over every downward slope I came across, and not wanting to lose my momentum more than I already did, I rarely touched the run button for the second half of the game. There’s a backflip button that grants you a huge momentum boost at the cost of losing control of Pink for a few seconds, which hindered me as much as it helped, and it’s hard to rely on such a gamble in a game this fast paced. Backflipping and every other mechanic works best when you are at a high altitude, but it’s extremely difficult to regain air once you lose it, at least not without skidding to a halt.

Losing momentum or touching the ground is not game over (most of the time) but you will encounter one or two large pits in each level that you need enough momentum to jump over or fall and return to the last checkpoint. I don’t like these pits because I fell into every one I encountered. This sent me back to the previous checkpoint, often several times, to repeat the same swings across the same environments, in the hopes that I’ll gain enough momentum next time. It’s disappointing that a game so short can feel repetitive. Even worse is one chapter that plays as one long chase scene. Thrilling in theory, but in practice you’re penalised with not just pits, but by getting shot if you get close to the ground. No matter how close I was to the end, I found myself returning to the one checkpoint halfway through the level more than a dozen times, which was my lowest point with Gibbon: Beyond the Trees. Other than providing some challenge, I felt the game would’ve been better without any fail states, because it’s at those moments that some of the game’s charm wares off.

It’s great that the developers tried something brand new control-wise, and like everything else in the game, the swinging looks (to my uncultured eye at least) authentic to the subject matter it’s trying to portray. But there are points when the mechanics are too unwieldy for a game this short. Gibbon: Beyond the Trees does offer a Liberation Mode after completing the story that appears to be a truly endless experience with procedurally generated environments and objectives to clear. Liberation Mode, mechanically speaking, is a great way to fine tune and get to grips with these controls, but falling into a pit erases all your objectives, so I didn’t venture too deep into it. But after some time, I can see myself going back to Gibbon: Beyond the Trees, when I want to breeze through the trees for a few minutes.

The game’s frame rate falters towards the end on the Switch, as the game’s backgrounds grow more complex. It doesn’t help that this complexity makes it difficult to know what you can and can’t grab, or when to let go so you can jump. I also found initial load times to be abnormally long, but not always, leading me to think it may be a bug. 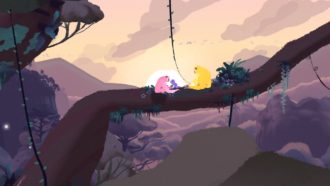 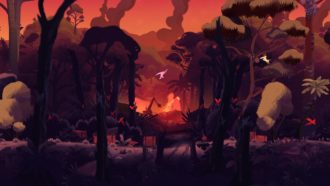 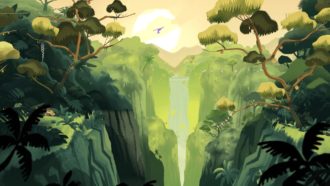 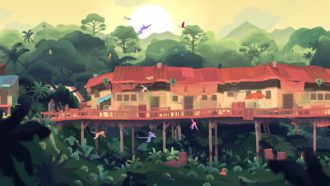 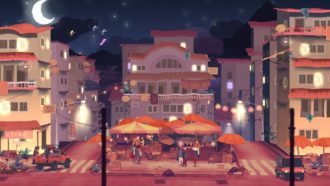 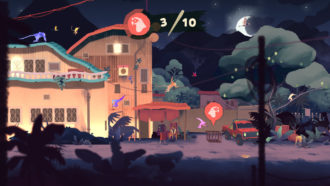 Gibbon: Beyond the Trees is a fantastically paced game seemingly designed to be experienced in bite-sized chunks with challenging controls that could be mastered by those willing to put in the effort. With all the thought and care put into representing these beautiful creatures and their heartbreaking lives, the game’s issues appear to stem from a lack of resources, not passion. Despite the repetition and technical struggles, it’s a short, sweet experience whose positive elements are more memorable than its faults.