The Mario range of sports titles have become a Nintendo staple over the years, but Mario Strikers, the series based on soccer (or “football”), has always remained one of the more underrated. Pitting your favourite Mario characters against one another in an aggressive game of 5v5, Mario Strikers: Battle League is the third time around for this particular brand of competitive sport, and the first since Mario Strikers Charged on the Wii way back in 2007. While the action here is furiously fun and more bonkers than your usual Mario sports fare, the lack of modes and repetitive nature on display will excite only the most obsessed Strikers fans, resulting in a mostly whelming experience.

Mario Strikers: Battle League sets up a 5v5 contest, where you can pick your squad from a roster of 10 playable characters; Mario, Luigi, Bowser, Peach, Rosalina, Toad, Yoshi, Donkey Kong, Wario, and Waluigi. You’ll only need to choose four, as your goalie is pre-selected as stocky Koopa, Boom Boom. The cast itself feels a bit modest, especially when you compare it with the wide range of characters available in other Mario titles like Super Smash Bros., Mario Kart, or the 20+ that inhabit Mario Golf: Super Rush from just last year. Still, there is hope that Nintendo will support the title with DLC to beef up the roster a bit.

Part of the game’s smaller roster size could be due to balancing, with each character featuring their own stats that focus on speed, skill, strength, passing, and so on. Unlike previous Strikers games where you play as a “captain” main character and a team of clones, Mario Strikers: Battle League allows you to fill your team with 4 of your favourites. This means that their varying playstyles and special moves are all on display at once, making things more fun and chaotic, and some strategy needs to come into play when hitting the field.

On a basic level, leaner, faster characters like Peach are going to struggle to tackle larger characters like Wario or Donkey Kong, who are more power-based. Of course, the trade-off is that they’re slower on the field, so you may be better off switching to Mario or Yoshi that are all-rounders. This balancing act certainly isn’t new, and is something that Nintendo have been implementing in all of their Mario sports games over the years… but if it ain’t broke, right?

‘…animations are strong across the board, with everybody moving around the field with their own recognisable style.”

What separates Mario Strikers: Battle League from other more friendly sports titles in the Nintendo catalogue is that it’s a bit more physically intense; to tackle, you’re literally kicking your opponents in the face to steal the ball, potentially knocking them into a nearby electric fence to shock them out of action for a couple of seconds. There’s no rules and no red cards here, so you can be as aggressive as you want without penalty. Characters show off when they’ve done well, with trademark animations from each of the roster that will be instantly familiar and charming to any Nintendo fan. When Wario is running in slow motion as money flies from the crowd or when Yoshi balances on a soccer ball like it’s one of his eggs, it’s hard not to smile. In fact, animations are strong across the board, with everybody moving around the field with their own recognisable style.

There are some advanced techniques that you’ll need to learn if you’re going to tackle the game on harder difficulties. Timing is everything, with passes and shots getting a bit more juice if you tap the corresponding button as soon as the ball is received from a teammate. A lob pass allows you to go over the opposing team, preventing an intercept. Shots themselves can have some more power behind them, but they leave you vulnerable the longer you stand still setting them up.

Tackling as well can make more of an impact if you hold down the button, and you can also dodge, if your timing is good. While most of this isn’t necessary on the entry-level difficulty (in fact I found myself often winning by a large number by only implementing the most basic techniques), you’ll have to adopt a more tactical approach in the more challenging tournaments, or risk getting stomped. If that all sounds a bit daunting and a lot to juggle at once, it is, but there’s (slightly longwinded) training that teaches you all the intricacies, which is incredibly helpful. 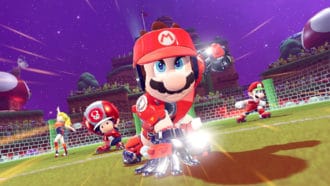 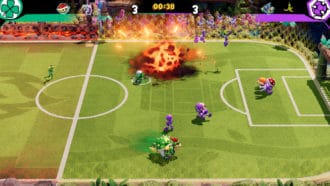 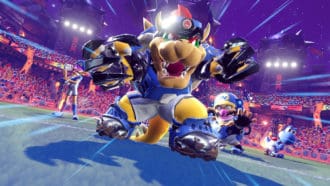 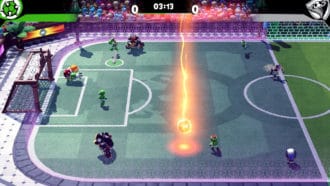 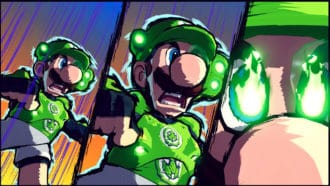 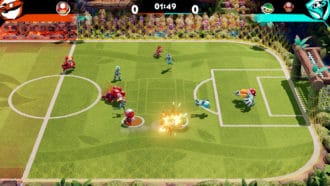 Staple Mario Kart weapons appear in item blocks throughout matches in Mario Strikers: Battle League, so a well-placed green turtle shell, banana, or bob-omb can help clear your path from one side of the pitch to the other, along with mushrooms for speed and stars for invincibility, of course. In most cases, the goalie is easy to trick to get easy goals, and I quickly found the right angles that consistently had my ball sailing into the net. On easier modes, AI tended to stand and watch rather than be aggressive, so I’d recommend the harder difficulties for an actual challenge. It’s not uncommon for each team to get almost 10 goals in one four-minute game, so this isn’t the slow-paced soccer you’d see in FIFA or otherwise; this is chaotic, quick, high-scoring, and intense from buzzer to buzzer.

To add some additional flair, you can access a Hyper Strike by collecting a glowing orb that drops onto the field intermittently. This then causes your whole team to glow for 20 seconds, and if you make a successful shot at goal in the opposite half of the field, a timing-based QTE can allow you to smash a special goal that can be worth double points, depending on how successful you are in the minigame. This is where more of that Nintendo personality shines through; Toad brings a squad of other Toads to help him, while Peach sends her ball flying towards the goal in a heart shape, mesmerizing the opposition. Even if the goalie catches the ball, he’s so hypnotized by Peach’s love that he just rolls the ball into his own goal, lovingly. These goals can turn the tide of the game while also being entertaining to watch, even if they do become repetitive in their un-skippable nature the hundredth time you do it.

Character attributes can be modified by gear that can be purchased using in-game currency, but most gear has a trade-off which means you can’t just max out all your stats. What it does mean however is that you can add speed to a more strength-based character like Donkey Kong, for example, or make it so that Mario is more specifically tailored to a playstyle instead of being a jack of all trades. It’s not detailed enough to make things drastically different in my experience, but it’s a nice addition to muck around with at least (and the gear makes the cast look a bit more dynamic and sportier). 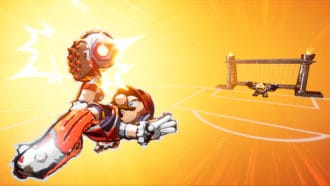 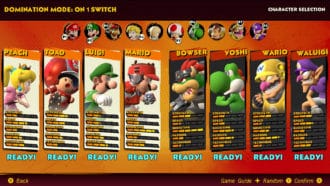 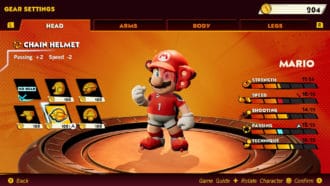 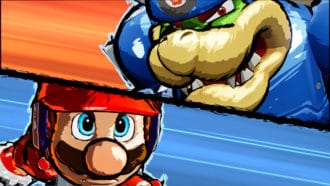 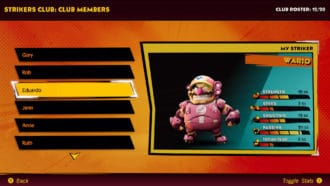 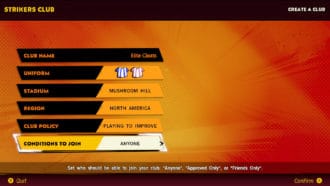 So, the gameplay is fun, well-thought-out, and intense, with some caveats. Sadly, the game modes available in Mario Strikers: Battle League don’t match that level of polish or excitement. Beyond quick-play, the only other offline mode is a double-elimination tournament system. Win three matches and you’ll win the trophy, with very little fanfare as you complete them. Each tournament has opponents of a specific playstyle, like a focus on strength or passing, and once you’ve completed them on normal difficulty, you can do them all over again with harder opposition. With no campaign or career mode to speak of beyond this, the game is a bit of a tough sell for solo players; after a couple of hours of offline play, I felt like I’d accomplished all I could.

“…after a couple of hours of offline play, I felt like I’d accomplished all I could.”

There is an online mode called Strikers Club where you can create your own club and recruit players to compete against other clubs from around the world. These are done through week-long seasons, with the aim to earn points and climb to the top of the division. There’s also the ability to play with eight players online or offline via local wireless. Doing manual passes to your real-world teammates rather than handling things entirely with the AI does add a whole new layer of tactics, also allowing you to achieve team tackles (where you bump a teammate directly into an opponent) more seamlessly.

When it comes to multiplayer, things do get a lot more interesting and enjoyable than when playing against the AI, so if you’re hooked on the core gameplay of Mario Strikers: Battle League, the online clubs could feasibly hold your attention. Otherwise, the package feels barebones for solo players, with very little to strive for or reason to keep playing once you’ve mastered it. Considering other Mario sports titles have had similar complaints in the past, it’s a shame that the team haven’t capitalised on what is a really entertaining core concept to create something better.

The core gameplay of Mario Strikers: Battle League is fast and frenetic, keeping your palms sweaty as you battle with your Nintendo favourites in an intense game of soccer. It’s flashy and well animated in all the best ways, with that trademark personality and charm carrying it a long way. It’s also a wonderful example of “easy to learn, difficult to master”, that starts simple but has some reasonable depth, even within the confines of its short matches. It’s a shame then that there just isn’t much more meat on the bone; with offline modes extremely limited with only quick play and tournaments, you’re going to have to truly love the mechanics to justify spending a lot of your time in competitive multiplayer. For those with a lot of mates to kick around with, that might be enough, but for everybody else, it’s a yellow card.