Souldiers Review – A metroidvania with soul

Developed by first-time Spanish developer Retro Forge, Souldiers is a charming, if imperfect, pixel-art 2D metroidvania action-platformer. It draws influences from many other games, but ultimately ends up creating something greater than the sum of its parts. Souldiers has its flaws, but the charming art style and compelling exploration and combat are definitely enough to make it a fun and worthwhile experience.

A journey beyond life and death

Souldiers starts you off as a random soldier under the command of General Brigard, fighting for the Kingdom of Zarga against the neighbouring Kingdom of Dadelm. Your regiment is sent into a cave to set up a counterattack, only to immediately all die in a mysterious earthquake. Fortunately, a friendly Valkyrie shows up and offers everyone a second chance in a new world of Terragaya, a land caught between life and death. You are then tasked to find the mysterious Guardian of this new world, and locate your former comrades.

As with a lot of exploration-focused platformers, Souldier’s plot takes a back seat after the prologue. I found it a bit inscrutable and confusing, particularly due to the prologue focusing on a war between two countries, neither of which is the main setting of the actual game. However, I enjoyed much of the supporting cast, from the jovial warthog shopkeeper Balof to the valiant General Brigard, as well as the appealing art style and animations which brought them to life. 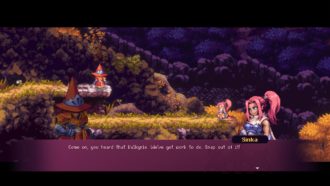 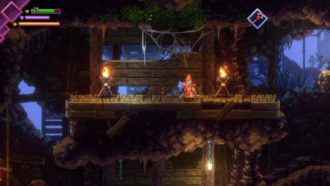 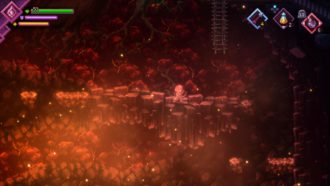 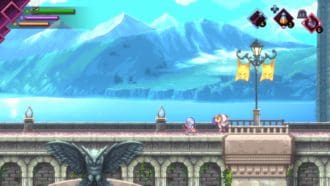 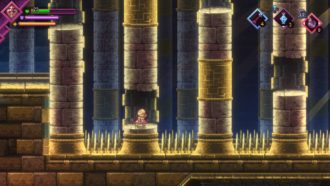 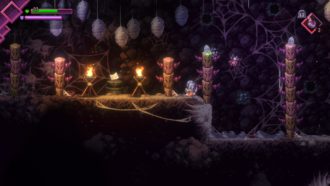 In terms of gameplay, Souldiers strongly evokes other metroidvania platformers, such as Bloodstained: Ritual of the Night and Hollow Knight. Where those games boast huge, interconnected worlds, Souldiers does things a little differently by sectioning off each explorable area into distinct, Zelda-style dungeons, complete with zone-specific minibosses, challenges built around whichever new ability you unlock in that dungeon, and keys to open locked doors. I enjoy that change in the metroidvania formula; it gives the game a solid structure and sense of where to go next. In addition to the main quest, there are also plenty of side quests to encourage further back-tracking and exploration later in the game.

Souldiers’ on Steam describes itself as “soulslike”. The game contains several similarities to FROM Software’s famous franchise, such as themes of life and death, a minimalist plot, and a murderous level of difficulty. However, the levelling and customisation aspects have not been migrated.

At the start of Souldiers, you pick one of three classes out of Scout, Archer, or Caster, and you’re stuck as that class for the rest of the game. Although you can level up and unlock new skills by defeating enemies, the speed of progress is painfully slow, and new abilities are often passive, and only unlocked every few levels.

The three classes do play appreciably differently, with the Scout as a close-ranged tank, Archer as a mobile ranged unit, and the Caster as a fragile glass cannon, giving some replay incentive. However, you’re made to pick your class before you’ve had an opportunity to experience any gameplay, and there is no option to change your class later on if you change your mind. If Souldiers was going to be drawing inspiration from Dark Souls, its less-restrictive approach to player class would be welcome.

I gave all of the classes a try, and they didn’t all feel equally fun to play. The Caster class felt the most troubled; despite its squishy wizard archetype, its ranged attack is linked to a finicky auto-aim that seems to hone in on whatever is closest, rather than the biggest threat, dialling down its usefulness when attacked by mobs of foes. Furthermore, its signature Magic Burst ability is a very close-ranged explosion which feels counterintuitive for the class with the lowest max HP. The other two classes also have their drawbacks, but they at least felt balanced with their upsides (such as the Archer being able to aim its arrows and the Scout being tanky enough that its lack of long-ranged options didn’t feel too punishing).

A tough but often rewarding experience

“The game really makes sure that you are using the dodge and block mechanics, and taking advantage of the potions and vials that can be purchased in shops.”

Souldiers can certainly be difficult, which is likely expected by fans of the soulslike genre that the game is courting. I enjoyed many of the bosses and challenges, particularly once elemental abilities allowing for more varied combat and platforming challenges are introduced. The game really makes sure that you are using the dodge and block mechanics, and taking advantage of the potions and vials that can be purchased in shops.

However, some aspects of the difficulty didn’t feel especially fair, such as enemies that would fire projectiles from offscreen and bosses that would often repeat the same attack loops over and over without leaving much in the way of openings to attack them back. Dialling down the difficulty setting also didn’t seem to have a noticeable impact on how much damage I was dealing or receiving; even on Explorer difficulty, it’s still a challenging experience.

As tough of a time as I was having, the land of Terragaya is beautiful to behold. Souldiers makes excellent use of its detailed 16-bit art style, featuring plenty of small embellishments that made its vibrant world feel alive. From small insects and animals crawling around in the background to the flicking of torches, every new area felt lived-in and active. Many of the character animations, such as your player character’s “getting out a map” flourish when you bring up the map screen, add to the appeal. The catchy soundtrack always seems to hit the right notes, whether energising a brutal boss fight or making a mysterious cave feel even more mysterious.

Souldiers is quite good, but doesn’t quite reach the peaks that it aims for. However, despite its unbalanced and restrictive class system and frequent difficulty spikes, there is a ton to recommend, from its detailed and varied world, beautiful animations, and engaging combat. Souldiers is not for the faint of heart, but if you’re prepared for its challenges and looking for a deep and engaging metroidvania platformer to get into, Souldiers is worth the recommendation.