The Quarry Review – A night to remember

Following on their well-tread path of choice-based horror experiences, developer Supermassive Games are back with their next teen slasher title. The Quarry tasks players with making the decisions needed and having the reaction time required to keep alive a group of young adults who find themselves fighting to survive a night of supernatural horror. With 186 different endings, The Quarry is in many ways an advancement on what Supermassive have done in the past, proving to be a return to form for the developer and a worthy successor to Until Dawn. Great ambition can lead to impressive moments of branching dialogue, though in many ways The Quarry also bites off a little more than it can chew.

The game takes place at Hacket’s Quarry, grounds to a Summer Camp for kids where our protagonists first meet as newly arrived camp counsellors. A season of summer fun turns to bloodshed and fear when a broken down vehicle forces our cast to stay at the Hacket’s Quarry lodge for one night longer than they ought to. A string of bad decisions and poorly communicated warnings lead to a horrific night involving local hunters, ghost stories, the mystery of a burned down freakshow, and an unknown life-threatening entity.

The Quarry is largely an interactive film. Cutscenes and uninterruptible dialogue make up the majority of the experience, with the player jumping in to control the sequences of events in a fairly limited capacity. At times you can walk around the space in a third-person perspective, looking for trinkets or noteworthy environmental details that help you to piece together the mystery at hand or provide extra lore. At other moments you can jump in to respond to a quick-time-event or button-mashing prompt that can influence the outcome of a scene based on a binary fail state. Other moments again give you choices, often on a timer, that force the player to pick one of two options, likely to cause a branch in the narrative. Outside of these moments, a large portion of the game will simply be watching scenes play out, jumping in with decisions and inputs here and there.

On a strictly gameplay level, there isn’t much to talk about in The Quarry. Quick-time events and the mashing of a button can create anxiety in moments of tense action. Though unlike Until Dawn before it, these sequences seem to have been made more simple and harder to fail. They can also be turned off completely in the options menu, a good accessibility feature for those who may need it. Moments of exploration are kind of awkward, perhaps deliberately so, as you try to simultaneously control rigid character movement and unwieldy torch shining at the same time. It’s not out of nature for a horror game to feel cumbersome to play, adding an extra layer to that feeling of helplessness and unease. Though if it was a deliberate choice, they may have gone one step too far in The Quarry. Particular forced camera angles and sequences were atrocious to control, with super dark environments not helping to make the exploration rewarding. Though, admittedly, it did make things scary.

The final bit of interactivity involved here is a new mechanic where the player character will hold their breath so as to not make a sound. It’s reminiscent of a mechanic in Until Dawn where you can’t let the controller move, however here you’re simply holding down a button and letting go when it’s safe to do so. It doesn’t create the same tension as Until Dawn’s mechanic, though I understand why the change had to be made.

A series of unfortunate decisions

The Quarry’s main draw is its narrative. Playing on tropes of the slasher movie genre (Scream, Friday the 13th, Halloween), the game takes you on a rollercoaster of near-death experiences as unimaginable sequences of horror befall the characters. Ripe with terrible decisions, some cheesy writing, and typical teen drama, The Quarry feels at home within its niche. I wouldn’t describe the game as perfectly polished or devoid of plotholes, though whether intentional or not, the game’s imperfections feel endearing and appropriate within the context of a slasher.

I don’t want to give much away about the overarching plot, but know that it does move in some interesting directions with one particular realisation being the pivot point that moves the game from mysterious to batshit crazy. There aren’t as many twists and turns as Until Dawn, and that can also make The Quarry somewhat more predictable, but I also can’t help but to enjoy the narrative for what it is. It’s supernatural and silly yet still threatening. It gives you campiness whilst simultaneously giving you high stakes that create immense tension in those moments of life and death.

The game’s ending doesn’t quite have the bite I wanted it to, and that is unfortunate. Though when you realise the number of branching options within the title, any single underwhelming path suddenly becomes a lot more understandable. 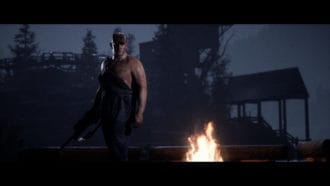 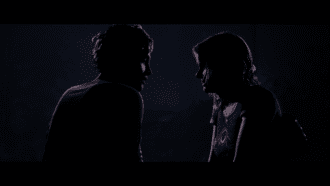 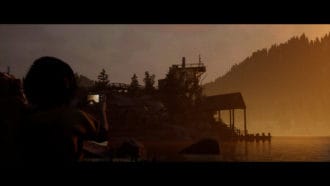 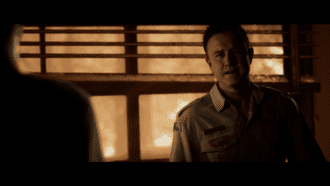 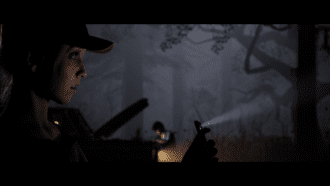 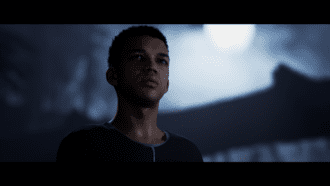 A butterfly can flap its wings

So how much do choices actually matter in The Quarry? In the lead up to release, Supermassive were boasting a whopping 186 different endings. You can see how this might take place as you play, with certain choices you make being highlighted on-screen. A journal keeps tab of all of these branching paths and they can impact minor things like how one character may feel about another as well as major things like whether a character is alive or dead. At the end of the game, you’ll get a recap of who survived and what happens next, and the range of characters involved is actually surprisingly big. Also surprising is the fact that different paths actually have different dialogue. I was shocked to see entire scenes I’d never seen before play out when I revisited the game and made new choices. It’s kind of a monumental undertaking, to have so much content that a player may or may not ever see. The payoff feels equally big; There’s a feeling of genuine importance placed on your choices and actions.

There are certain sacrifices that were clearly made however in order to accommodate all of these diverging paths. A scene where two characters should be running out of a room together was instead stitched into two independent shots of each character leaving individually, saving from a third scene needing to be created. It works and maintains the cohesion of the narrative, but feels awkward and imperfect. Some characters won’t react in crazy situations presumably because they may or may not be there depending on choices. Some scenes just felt unnatural, cut together awkwardly, or badly written, and I have to assume it’s an issue of split attention/resources. Storyboarding, motion capture, animation, scripting, editing, re-shooting if need be—it’s all a big ask when it’s path 103 of 186 and very few players or playtesters will even see it. Instead, the game cinematically and narratively often feels ‘good enough’ rather than great. A problem that no doubt could have been resolved had the team been less ambitious.

“There’s a feeling of genuine importance placed on your choices and actions.”

Despite some clunkiness, the branching narrative in The Quarry appears, at least on the surface, to be very impressive. That is apart from one catastrophic design decision. Your main goal in The Quarry is to try and keep these camp counsellors alive throughout the whole ordeal. So when I was first introduced to a mechanic that allowed me to replay a fatal decision I had made in order to save a counsellor who just died, I was happy. The game has a death rewind system where you essentially have 3 do-overs you can use to keep everybody alive. The problem is that those do-overs take you back to where the branching path started that led to their demise. If that point is just prior to their death, then great! If that point is multiple chapters prior, then you have to replay it all over again.

I was hit by one particular death rewind that had me replaying about 30 minutes of the same content over, just so I could change 1 decision. It was tedious, with no way to fast-forward the dialogue I had already seen. The problem is apparently being addressed by the developer but with no promise of an update prior to launch. Know this before playing, doing a death rewind may kick you back a long way without any warning.

The Quarry is an interesting case study. It’s such a unique experience that I can’t help but enjoy despite such glaring shortcomings. The motion capture technology in use is cool but imperfect, creating an almost uncanny valley feeling as character eye movements don’t quite match up with anything natural. The horror elements are varied and welcome, with ghostly jump scares reminiscent of those found in Mike Flanagan’s horror TV series such as The Haunting of Hill House or The Haunting of Bly Manor. Mix those moments with typical Supermassive tension created by unknown threats and going up close with a horrific beast and you have a nuanced horror affair that keeps things shifting and fresh.

The characters themselves are well acted with a great cast including the likes of David Arquette, Siobhan Williams, Lin Shaye, Lance Henriksen, Grace Zabriskie, Ted Raimi, Ariel Winter, Ethan Suplee, Miles Robbins, Halston Sage, Zach Tinker, Brenda Song, Skyler Gisondo, Evan Evagora, and Justice Smith. It’s a big lineup and the personalities feel multifaceted rather than one-note. I was also impressed by the game’s cooperative offering where you could assign characters to players and pass the remote around when a new character became the focus of the action.  A movie mode is also a great addition, allowing you to play out the game like a movie. What makes this even more special is that you can assign the movie to play out with all characters surviving, all characters dying, or a more specific result that you tailor. It’s so cool to see those options, but again, having a dialogue fast-forward feature here would go a long way.

The Quarry proves to be a worthy successor and a notable release within Supermassive’s lineup of branching-path slasher games. A frightful narrative full of tense moments creates a satisfying experience for horror fans, made even better when played alongside others. An ambitious amount of choice proves to be a double-edged sword as the game teeters on the edge of quality and quantity, with one particularly egregious mechanic dampening the experience for those who don’t like to replay large chunks of a game. Though, despite its obvious shortcomings, there’s a level of campy fun that’s undeniable as the game engages from one freaky sequence to the next.