It’s hard not to glance at Arcadegeddon without thinking it looks like a hell of a lot of fun. The world and the characters appear like they’ve come straight from a sci-fi inspired Saturday morning cartoon show; with big plasticine hair, shiny skin, and neon-splashed outfits with streaks of intense blues, purples, and pinks. The music, with its dub-step pop beats, really complements the slick atmosphere and visuals nicely. However, when you dive into this co-operative PvE/PvP multiplayer shooter, you’ll begin to see that all this glitz doesn’t hide the number of glitches and bugs that the game contains.

In Arcadegeddon, you play as a voiceless protagonist who is there to help Gilly, the owner of a local arcade, from having his wholesome business ripped from under him by the insidious Fun Fun Co. There’s nothing fun about this big corporation; they are out to hack Gilly’s arcade and only you and your squad can save this small business from getting into the wrong hands. You help Gilly by entering his virtual world to eliminate this virus which appears in the form of many different enemy types.

The game is played as a cooperative, third-person shooter roguelike. You’ll set out on runs with your squad and mow down enemies with the copious amount of guns given to the player, until you either complete your run or die trying. The gunplay is slick and when everything works as intended, it feels like a genuinely good time.

The locations of Arcadegeddon spawn randomly once you enter the “chamber” that takes you into the world via Gilly’s arcade showroom. Before you enter Gilly’s virtual world, you can accept challenges from a range of different NPCs that are standing around chilling. The dialogue of these NPCs and Gilly himself are a bit cringe at times and seem to be trying super hard to be cool. The challenges are pretty pedestrian and include stuff like “Get 50 Melee Kills”, “Get 80 Enemy Kills”, and “Get 300 SMG Kills.” Once completed, they will give you tickets that you can then use to purchase cosmetic upgrades. These NPCs seem to be included to keep the player busy for busy sake, with the rewards offered not being particularly attractive.

During your gameplay run, you will experience different randomly spawned stages which include a futuristic cityscape, a fiery hellscape, and an aerial arena made up of multi-platformed sky decks. These locations will also contain objectives to complete such as closing breaches or shooting down corrupted targets labelled Glitch Siphons. Of course, you will also have the virus enemies in the form of armoured soldiers, crazed purple zombies, and combustible balloon-headed aliens trying to stop you from completing your tasks successfully. Along the way, if you look around the right corners, you will find chests that will give you rewards such as different weapon types. You have three weapon slots, with your starter weapons including a baseball bat and a pistol that has unlimited ammo. Through weapon mastery, you can also alter these starting weapons with ones more suited to your preferences. Some of the quirkier weapons I came across were the Ex Machina which litters the sky and then your enemies in bombs, the Vaporizer which unleashes streams of nanobot vapours, and the Slicer which is a short-range shotgun that shoots miniature blades.

Between the game’s stages, you will enter a safe zone of sorts that offers some respite. Here you can use accumulated resources to buy more ammo for your weapons, buy new weapons and health, and pay to increase the difficulty level. Here you will also find access to mini-games known in the game as Battle Modes. These battles are the PVP element of the game and give you a break from the environmental fights you encounter throughout the main campaign. When you enter these modes you’ll experience minigames like Tile Drop where you need to stay atop a stack of tiles whilst also trying to knock others off with your baseball bat. There’s Block Breakers which is similar, but the blocks under you can be shot and if you fall, you drop down to the next level. Other minigames are more combat focussed and will have you killing your co-op friends with lasers and rockets, often with additional objectives such as holding zones for points. The winner of these battles nabs themselves some loot they can use when the party is ready to continue their run. These PvP minigames offer a fantastic change of pace and make Arcadegeddon feel like a truly unique blend of PvP and PvE.

“…you’ll begin to see that all this glitz doesn’t hide the number of glitches and bugs that the game contains.”

One of the most unique elements of the game is the Boss Meter, a hexagon on the top right of the screen that fills as you kill the enemies around you. When this is full, you are given access to a boss level, though you can simply ignore this and continue playing through the game’s stages. Each boss you come across becomes progressively harder and it’s these boss battles where my squad and I found some pretty yucky bugs. The most annoying being a glitch that completed prevented us from progressing once a boss had been beaten. This meant that we had to restart the game and also forfeit the progress we had made. A smaller inconvenience was that downed players could not see the boss’ health during the fight.

We also found that the host of the game could not access the customisation menu and also couldn’t emote. These may seem like small things, but when you add them all together, they form one big buggy picture that makes the game seem less desirable to spend time playing. The game was downright unplayable come launch when I was unable to access the game’s world via Gilly’s arcade. Having this occur really did push my feelings of apathy towards the game over the edge. This is unfortunate, as Arcadegeddon, with a bit more development time squashing bugs, could have been something way more special. 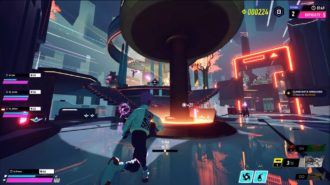 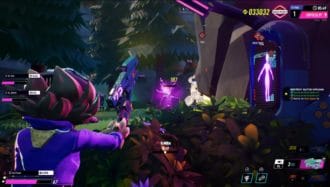 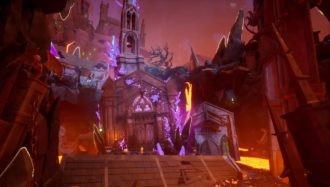 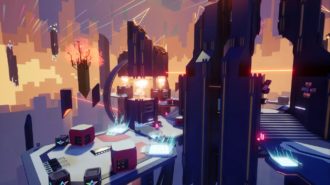 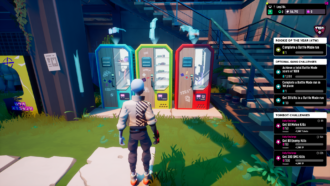 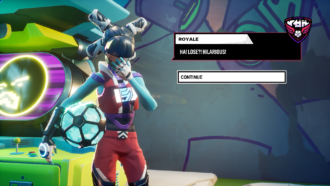 When Arcadegeddon does what it’s supposed to do, it’s a rollicking good time. Experimenting with the zany weapon types, getting my butt kicked in the Battle Modes, and interacting with the vibrant neon world is so inviting. However, all those bright and sparkling qualities didn’t matter when Arcadegeddon’s glitches became too obtrusive to ignore. It’s a shame, as the game has a lot of potential to be a fan favourite for those who love to squad up with their mates and have a laugh whilst being challenged. As it is though, I would wait a bit longer to sink my teeth into this co-op experience.