MX vs ATV Legends is the newest title in the long running MX vs ATV franchise. MX vs ATV has a long history behind it, it’s the lovechild of THQ’s MX trilogy and Sony’s ATV Offroad Fury series. With a career mode to become a world-famous legendary racer, ride dirt bikes, ATVs or UTVs against AI. You gain fans and money where you can upgrade your vehicles as you compete in races. Is Legends the game you want to ride off in the sunset with, or will it scream in the backseat on the way to Cape Canaveral?

Beginning with a tutorial, team member and mechanic TJ Johansson teaches you how to ride the bike and play the game. Most of this is regular things you pick up from playing games with vehicles. Once completing the tutorial, you meet Emilio Rawlings, a potential team member, who allows you and TJ to practise on his farm. After speaking to Emilio, you have more tutorials to complete, which will help you in your career. However, let’s hope you can remember the move set, because there’s no way to revisit the tutorials. And when starting, there’s no way to skip the conversation, you can either start the conversation or stop it.

You make your way over to the wacky waving inflatable arm flailing tube-men. It took me an embarrassingly long time to realise that the conversation needed to close to start the tutorial; and once finished, you’re plopped at the front of the Farm ready to start another tutorial. For me, this is where the first glitch occurred that impacted my experience straight away. After jumping and falling into a large body of water, I respawned, and the bike rode… riderless. It only fixed itself when my bike had a head-on collision with a rock. A lot of the glitches encountered aren’t game breaking, which is a relief, but they can certainly be weird and frustrating. 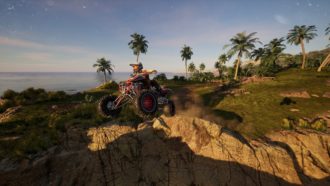 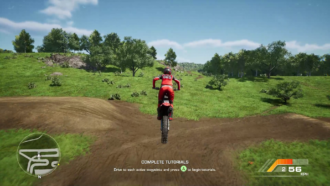 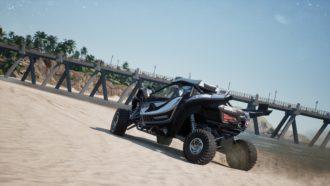 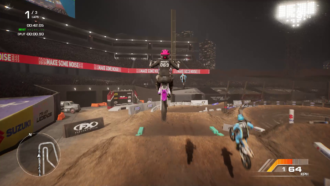 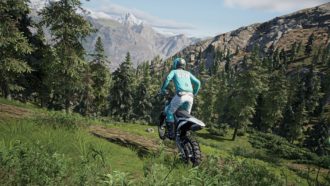 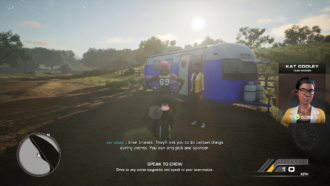 The farm itself is the main open world area, with the option of more in free ride mode. In the open world you’ll find floating helmet collectables that you can grab by driving into them, and each area is a different environment to practice on. There are tracks, hills, open bodies of water to have fun zooming around. But, the open world feels a bit redundant, as there isn’t a lot to do. Legends does at least have a leg up on being able to test yourself and get better at the trials, or stunts. But, while playing it does feel like it only exists there to talk to characters you meet throughout the game.

Playing the career mode of Legends is serviceable, and you have the option of racing bikes, ATVs or UTVs throughout. This includes timed trials, checkpoints and even supercross. There’s some variation so no event is the same, but the tracks do get re-used. The MX bikes feel decent to ride, but can feel kind of slippery, even if the ground is dry. Changing from dual to single stick helped this out for me but your mileage may vary. The ATV, on the other hand, is bouncy; anything and everything will set it off and you’ll start bouncing around like a ball in a pinball machine. And the UTV is the most trouble out of the three, it’s bouncy much like the ATV but also it can drift for some reason? There are no issues drifting with the bikes or the ATV, and I don’t have the dreaded controller drift. But it’s like if an AI knocks into you, you are forced into turning right or left… for some reason. This is a similar issue with keyboard and mouse, so not controller-specific.

Other issues while playing the game includes how you can be ‘off the track’ and how finicky it is. Sometimes if you’re off the track for 0.5 seconds it’ll respawn you, and it takes some effort to get back to the speed you were once at. Other times, it feels like you can be off the track for a whole minute before it decides to respawn you. In one instance using the UTV, the rider is within the boundaries placed but the game viewed me as out of bounds, but didn’t let me know. When I did eventually get to the podium, the game reminded me that I was off the track or out of bounds. It doesn’t go away, but I was still able to proceed to the next destination without any trouble.
The environment reacts to your racer, with dirt flying behind the wheels, and you can see water splashes. This is notable as the lack of detail was an issue players had with their previous title in the series, All Out. Legends includes dynamic weather, which also has an impact on how you ride. Rain and mud might make things slippery, whereas snow can make it harder to see in front. Trees and rocks can stop you, and the guards on the side of the maps are hittable, along with signs. A lot of these tracks have yellow pegs and boards that mark the road. The pegs don’t do anything but the boards can impact you, as if you hit too many they can slow you down. Tracks might also have haybales, or blocks that also show the road or can stop you from going somewhere you can’t. These are hittable as well, but they will despawn and respawn after a second or two.

There is a multiplayer mode, where you can play against 16 others, as well as split screen compatibility which is cool to see. The rider is voiceless, and there’s not much to customise, though. You can change their body type, which either gives you a flat chest or a round chest and as well as your name and number. Other forms of customisation are your helmet, goggles, outfit, gloves and boots. There’s no bonuses to them, so you can just wear whatever you want for aesthetics. Same goes for the type of bike you own; there’s the option to upgrade them with different parts and you can change the vehicle’s appearance too, but there’s no bonuses attached.
The art style is reminiscent of previous MX vs ATV titles. It’s not specifically impressive visually speaking, but does the job. The downside, however, is that the cutscenes that show what kind of race you’ll be playing show as a 480p video. Even with graphics all maxed out, it feels like when your Internet is a bit sluggish so YouTube has to lower the quality. There’s a lot of stuttering in these videos too. Here’s hoping that with future patches, they can make it look sharper. When riding an ATV, the AI riders act as if you are seeing them very far out, like they’re skipping a few frames. This issue shows up on the MXs too but it’s not as noticeable. And you can’t see the characters in the UTV so there’s no way of knowing. It’s rather jarring considering the playable rider is more fluid in their animation.

“…it feels like another racing game that isn’t shaking up the genre.”

The music is right up my alley, there’s some Bring Me The Horizon and Asking Alexandria, in addition to original music. But, sometimes it would softly cut in and out, and there doesn’t seem to be an in-game reason as to why that is. And sometimes the music will be quiet enough, and then next thing it’ll be super loud. There could’ve been a bit more polish to the audio mixing, which is a damn shame. The voice acting is fine, but, the characters aren’t moving their mouths while speaking. So it feels like an omniscient voice speaking to the rider. It can also be quite jarring and takes you out of the scene.

Accessibility options in Legends are lacking severely. The subtitles automatically applied is great, but there’s no options to turn them off if you prefer. There’s a couple of grammatical mistakes in the subtitles, capital letters where it should be lowercase and vice versa, or doubled up letters. One thing that is super frustrating, is that the subtitle paragraph will cut off mid-sentence. In the image gallery towards the start of this review, you can see an example of this in the last image. So instead of each paragraph ending with a full stop or comma, it’ll end mid-sentence so reading it is awkward. There’s no option to change the size of the fonts, or even add a background so you can tell what the words say.

There’s no colourblind mode, and no way to remap the controls. There’s not even an option to see the key bindings, so if you’ve forgotten how to do things, you might have to consult a walkthrough. You’re able to hide the HUD, add pro physics, change the difficulty from very easy to very hard and change the steering from dual stick to single stick. While the game is set to the easiest difficulty, some of the tracks are still difficult to win. Or are so easy that the rider was 2 minutes ahead of 2nd place in some races, so it’s inconsistent there as well.

There aren’t any truly game breaking bugs or glitches. One issue is that, playing a rally track it wasn’t registering that my driver hit the checkpoints. Though in the end it didn’t matter because my rider still won, it still made me take pause. When going through the menu and choosing between MX, ATV or UTV, you can see on the top-right of the screen some white pixels, most likely the names of the career types. It isn’t super distracting, but if you take everything in it is obvious. The UI itself isn’t bad, though when you have to talk to your team members, your screen can feel a bit crowded. You’ll also be hanging around the menu a lot.
In general, Legends is another average entry into the MX vs ATV universe. Rainbow Studios has put enough care into the racing components at least, and the fact that they do listen to fans concerns is commendable. But the handling of the vehicles makes it kind of annoying to sit through another race that you’ll lose, rather than motivating you to take another lap. The idea of gaining fans as you race is a fun idea, but it feels like another racing game that isn’t shaking up the genre.

MX vs ATV Legends has a legacy behind it, but it doesn’t bring anything to the table to bring new concepts to the genre. While it’s fun enough to ride around on bikes and have the driver ragdoll their way down the hill, there are some persistent issues like vehicle performance and video quality. Subtitles are cut off mid-sentence so reading it is awkward, and there is a real lack of accessibility options for those who need it. Music choices are rad, as there’s some more modern-ish music in it, mixed with some older ones. Overall, MX vs ATV Legends is a fun racer to goof off with your friends, but nothing to seriously sink your teeth into.