Yurukill: The Calumniation Games Review – We do the genre mash

It’s always cool to see a developer attempt something new. There are so many games that stick to tried and true formulas, following the trends and making a game that will appease the broadest demographic. However, there’s always fun to be had when a game dev team tries something weird. Yurukill: The Calumniation Games is something weird. It’s a mash-up of a familiar visual novel style game with minimal puzzle elements and choice mechanics, and higher stakes moments taking place in a shoot ‘em up. As I said, it’s weird.

Yurukill definitely lives within a similar genre to Danganronpa by following a group of strangers attempting to survive in a deadly game, but there is a little bit more to it. The characters in Yurukill are separated into two groups, prisoners and executioners. Ostensibly, only the prisoners are in danger while competing in the death game, where the executioners are there to watch and help with puzzles if they deem it necessary. Oh yeah, they also have a button they can push at any time to have the prisoner executed.

Prisoners have been dragged into the game unwillingly, all of them serving prison sentences for crimes they didn’t commit, and promised a chance at being acquitted should they win the Yurukill Games. The executioners appear to be participating willingly, but why they would do that is not immediately clear. The games themselves are mostly a set of escape rooms, each themed after the incident that sent the players to prison in the first place and the whole thing is being run within a huge theme park. It does bring to mind questions about who might be running this whole shindig, questions that go disappointedly unanswered.

Binko is the host of the games, filling a similar role to Monokuma in Danganronpa but losing a bit of the charm by being a flesh and blood human instead of a walking talking bear. I flipped between loving and hating her every few encounters. They had this cute joke about her having to run everywhere to make sure she is always waiting when the players reach the next location. She’s always out of breath and it got a laugh out of me most of the time. She also makes puns using her name. It’s less bin-dearing than the game thinks it is. 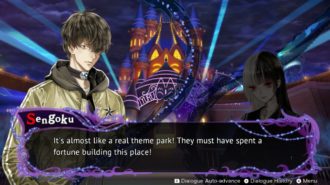 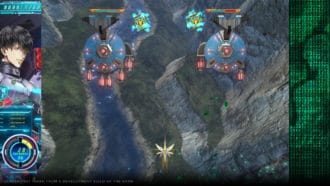 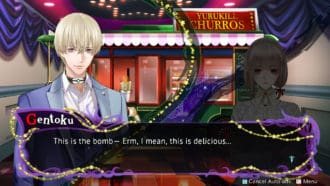 Yurukill follows an act-by-act structure and each act follows essentially the same formula—an escape room, a big character reveal, and finally the shoot ‘em up section. While the first pair you play as are definitely what I would call the protagonists of the game, you do find yourself playing as different characters throughout. The pairs of characters always involve one prisoner and one executioner, with you usually taking on the prisoner’s role.

The intro and ending of the game is played entirely as the first pair, Sengoku and Rina. I found myself getting pretty upset when I had to leave them to play as other characters because they are the most well-developed and endearing pair. Sengoku is an everyman kind of guy, he loves board games and theme parks, but he also has an unwavering desire to protect Rina. He was far and away the best character in the game.

Yurukill’s plot does feel unfocused at times. Each pair of characters has their own story about learning what got the prisoner arrested to begin with and how the executioner fits in, the majority of these stories are pretty grounded and that is why they work. It feels like the sort of accident that anyone could stumble into and it makes you feel for the characters. Chapter three is the exception, the backstory for those characters is bizarre and feels so wholly disconnected from the plot that it almost killed the game for me. Luckily it bounces back quite quickly, but when these ridiculous plot elements came back towards the end in a big way, I was very disappointed.

The overarching plot is a mess, there is really only one thread of connecting tissue and it only exists between the first pair of characters, so while you are following the others around it feels like no progress is being made in figuring out the mystery behind the Yurukill games as a whole. In games like this with a sinister group behind the incidents, finding out what brought all the characters together can be the most exciting part, and Yurukill loses its sense of progression in the middle, really only coming back to it right at the end.

Yurukill’s gameplay is hit and miss. The visual novel portions are suitably entertaining most of the time, the dialogue between the characters is fun, and while a few of them are better than others, it all reads nicely with fun interactions. Puzzles take up a decent chunk of these sections as well, and while most of them are interesting and not too difficult, there are multiple times when it feels like key information is missing. The puzzles have a hint system, for each puzzle you have three hints available, getting more and more explicit with each one and I often found myself needing to use the first hint to even understand what the puzzle wanted from me. It wasn’t that the puzzles were hard, it was that I didn’t even know what I was supposed to do.

The other main gameplay element is the shoot ‘em up sections. These feel weird, the game tries really hard to shoehorn them in and make them part of the plot. They aren’t just a representation of real events, or a mental device used to solve problems like a Logic Dive or Hangman’s Gambit in Danganronpa. They are real events that are really happening in VR. It’s confusing and tries so hard to justify itself that it ends up being a stretch. It plays okay, but there is this weird horrible slowdown that happens every time you take damage, or any other time there might be too many particle effects on the screen which makes it hard to play. It also reuses all the bosses at least once, sometimes multiple times which feels lazy.

While it was an interesting choice to mesh together a shoot ’em up and a visual novel, it just feels like Yurukill doesn’t manage to do it elegantly. It never feels like the two gameplay sections properly meld and they always feel completely separate from each other.

Yurukill: The Calumniation Games is a bit of a mess, but it definitely feels like a mess that someone tried really hard to make. While the gameplay elements sometimes feel at odds, it has a lot of charm in its characters and UI design. Even though the game’s plot can feel unfocused and confusing, it does have some really good moments. The characters especially do a great job of keeping the story engaging, even when it loses itself a little. Yurukill definitely has both hits and misses, but it feels very earnest and I hope to see more games by this team soon.