From sacrificial lamb to all-powerful conduit of a chained being known only as ‘The One Who Waits’. Cult of the Lamb tasks players with building up their flock, indoctrinating new followers, and taking control of their destiny as they fight back against fate with dark rituals and ungodly sacraments. Half roguelike and half colony sim, Cult of the Lamb is a unique blend of gameplay genres that works to create an addictive gameplay loop whilst adhering strictly to its thematic choices. Go forth young Lamb, for the Heretics of this world must be brought to an end.

Cult of the Lamb kicks off with our lamb protagonist saved from the grips of death by a powerful force. The last of its kind, the lamb’s fate is reversed as they become a vessel for The One Who Waits, a death-like figure who uses the lamb to bring the reign of the false prophets to an end. As the lamb, you’ll build up your own following as a cult leader, develop your township with new buildings of worship and amenities, and venture off into the land of the false prophets where you’ll bring death to the four Heretics who first attempted to slay you.

Immediately striking is Cult of the Lamb’s visuals and stylistic flair. 2D setpieces make up the game’s characters and environmental design, like a satanic Paper Mario. Cute meets evil is the general aesthetic choice, with adorable woodland critters frequently being sacrificed, imprisoned, or harvested for meat. Unwavering in its cultist depictions, the game excels at creating its own dark-yet-endearing vibe and refuses to back down from that portrayal. Just as captivating from your first indoctrination until the moment credits roll, Cult of the Lamb’s visual design and well-defined theme gives it so much personality.

The audio design keeps up more than amicably as well, with every dark action punctuated by an appropriate sound effect, and atmospheric-yet-catchy music setting the mood for every combat sequence and action on screen. 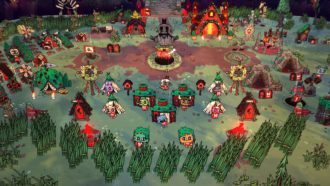 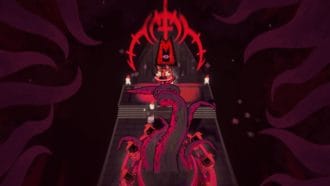 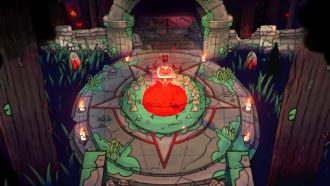 Cult of the Lamb’s gameplay borrows from many points of inspiration but brings them all together in a way that feels uniquely different. Your homestead is where you’ll spend a good portion of your time, watching as your flock grows and diligently works to build your cult from humble beginnings to something extraordinary. New followers will be recruited as you play, and each is represented by an animal or otherwordly critter. You can name your followers which can help you grow an attachment, but be careful, as these characters can dissent against you, die of old age, be sacrificed to increase your power, and ultimately face various untimely ends. Watching your homestead grow with structures and followers who walk around gathering resources, praying, and chatting amongst one another is dreadfully endearing. It’s as if your Animal Crossing village was flung into an alternate, ungodly dimension.

As you play the game the day will constantly progress and your followers’ needs will shift. Managing hunger, faith, and sickness will be a priority as you try and keep your flock satisfied. Build bedding for each newly indoctrinated member, build sights of worship to allow your flock to pray and generate Divine Inspiration, build farms to grow crops, and continue to upgrade and expand through a tech tree. This is the colony management/sim side of the game, and whilst it doesn’t have the depth of a dedicated game within this genre, when combined with Cult of the Lamb’s equally important roguelike side, it provides more than enough entertainment and a great and varied gameplay loop.

“…every impact [is] accentuated with thuds and screen-shake. There’s a satisfying force behind your actions…”

When not building up your township, you’ll likely be venturing off into the world of false prophets where you’ll move through connected rooms, clearing out whatever obstacle lies in your way. Combat is simple with the ability to dodge roll, attack with your weapon, and shoot out magic in the form of curses. It’s not groundbreaking but it works, with every impact accentuated with thuds and screen-shake. There’s a satisfying force behind your actions and a good variety of weaponry and curses to help keep things dynamic and engaging.

Also found within these dungeons are non-combat encounters that may involve acquiring a new card rewarding you with passive boons for the run you’re on, NPCs who can give quests and help unlock new areas of exploration, rooms where you can gather a certain resource to utilise during the colony sim phase of the game, and much more. Part of the strategy becomes deciding which string of rooms you want to take on with icons advising as to what may be coming up next. Eventually, these dungeons will lead you to a boss fight where you’ll hopefully slay one of the four Heretics who stand in your way. These bosses also taunt you during your expeditions, so it’s mighty satisfying to silence them once and for all.

As far as roguelikes go, Cult of the Lamb isn’t particularly challenging. Progress plays a big role in advancing through the dungeons, with follower size pre-requisites helping to make sure both halves of the game are developing simultaneously. There are many ways to make your combat experience easier, with buildings, items, and skills acquired during the colony sim phase keeping you feeling more and more powerful for each new roguelike run. Again, this half of the game isn’t particularly impressive on its own, feeling less feature-rich than your average dedicated roguelike game, however, the way it merges harmoniously with the game’s colony sim side more than makes up for any shortcomings. 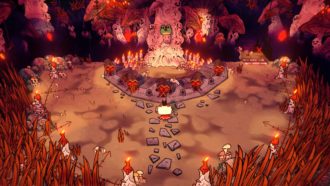 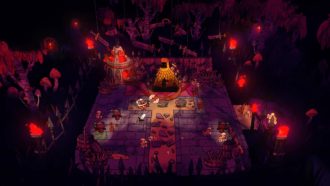 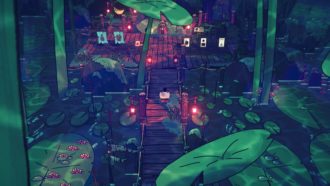 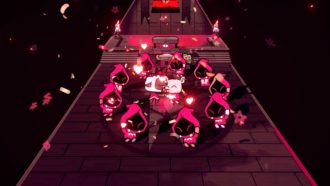 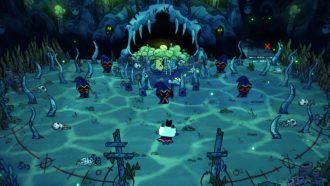 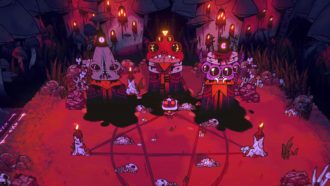 Cult of the Lamb is quite a feature-rich game. I was constantly surprised by how many new things were slowly introduced over time. The variety alone in decoration and customisation options is very impressive. Once you realise just how many different tech and skill trees you can move through, buildings you can construct, rituals you can perform, and NPC locations you can uncover, it suddenly dawns on you how big the scope of this project actually is. Even more impressive is how the game can introduce all of these features without ever feeling overwhelming or convoluted.

A few glitches did hit me during my playtime, though none were particularly egregious or inconvenient. Once Cult of the Lamb wraps up, there’s also unfortunately not much in the way of end-game content. With that said, it didn’t take away from my genuinely deep appreciation of the game, and the 15 hours I got out of it before credits rolled are certainly nothing to turn your nose up at.

Cult of the Lamb doesn’t just surprise and delight with its visual prowess and unflinching cultist motifs, it also hooks you with its addictive and adaptive gameplay loop. There’s not a dull second as you move through two equally important and varied genres of game that mesh beautifully together to create a unique and captivating experience. A lack of end-game content may disappoint some colony sim fans, though it ultimately does little to sour what is a genuinely novel game that knows exactly what it wants to be.