Destroy All Humans! 2 Reprobed Review – Too alien for 2022

When Destroy All Humans! 2 was originally released back in 2006, the world was a very different place. The “#MeToo” movement was yet to occur and “toxic masculinity” was a term that was nowhere near as common as it is in 2022. Therefore, Destroy All Humans! 2 Reprobed is very much a game of its time and to enjoy it, you either have to teleport your brain cells back to an early-00’s way of thinking or strap in for a cringe-filled ride full of misogyny and toilet humour.

The action adventure is a sequel to 2005’s Destroy All Humans! which saw the foul-mouthed alien Crypto-137 crash land onto Earth, in particular, the United States, in 1959 and cause all sorts of havoc. The original was a complete satire not only 50s Cold War America, but also the ridiculousness of being human. Crypto, a literal alien outsider, was the perfect anti-hero who saw humans as sloppy, disgusting, unintelligent creatures. He was a well-formed character who embodied the values of a disgruntled-old-man who didn’t suffer fools gladly.

Now fully rebuilt in Unreal Engine 4, the remastered sequel, Destroy All Humans! 2 Reprobed is set ten years after the original. Crypto-137 is dead and is replaced by a clone, Crypto-138; this new version of Crypto comes for the first time with human genitalia referred to as “the package” – an obvious example of the kind of childish humour you can expect. This humour still stays true to the feel of the original, however the game has detracted from a lot of its more interesting satirical humour, instead relying on simply using stereotypes of late 60s symbols and tropes.

The game is now set in 1969 and begins in San Francisco (dubbed “Bay City”) and this time the KGB, rather than the world wide fictional agency Majestic, are the main antagonists. Not only are they intent on stopping Crypto and his superior Pox from continuing to run the US but they shoot down Crypto’s mothership, leading him to want to even the score. It doesn’t help that the KGB have a highly dangerous secret weapon – a spore that when released turns humans into bulging toxic green monsters that look very much like Spider-Man’s arch nemesis Venom. The game’s main premise is for you to stop the KGB from turning the human race into toxic goo oozing mutants and sees Crypto jumping around a few countries in his mission to squash the Russian’s plans.

Destroy All Humans! 2 Reprobed has very similar gameplay and structure to the original. You find yourself in a sandbox location with a mission to complete, which is usually given to you by Pox. Other than its main objective, each mission has optional mini objectives that will give you added bonuses if achieved. After each chapter is completed, you will receive a summary of your performance out of 100%; the more optional objectives you complete the more Furotechs you will receive post-mission. These Furotechs come in two forms – one is the cell variety which are green and can also be found around the world’s map. The other are reactors, which are harder to come by and are only given when defeating bosses. Both cells and reactors are used to upgrade weapons, Crypto’s abilities and his spacecraft.

The gameplay for each mission usually focuses around defeating KGB agents, destroying enemy equipment/bases or escorting trusted humans through enemy fire. To help you do so, the game has introduced a whole range of new and upgraded weapons and abilities that are a lot of fun to mess around with. Ability wise, there’s the “Body Snatch” which has replaced and very much improved the Holobob ability that saw you use a hologram to “act” as a human. Now however you can go into any NPCs body and if you’re not noticed when you transform, you can easily run around incognito from place to place – as long as you don’t show any signs of being an alien.

The one issue I had with this was the fact that so many of the NPC designs were literally copied and pasted, meaning that there was maybe about ten different NPCs in each location which really did take away from the feel of the world. The world itself can be stunning to look at however, with its gorgeous technicolour painted murals to its 60s record stores that ooze with boppy tunes and mellow blues; there has obviously been an attention to making the world look like the era it takes place.

Another homage to the time period is “Free Love” which hypnotises humans around you to start dancing on the spot to 60s psychedelia giving you a chance to run for cover if necessary. If a human does catch you performing any of these acts, they could use one of the many pay phones littered around the world to call the authorities. The more that are called the higher your “wanted” rating is and the more you will be harassed by a barrage of cops. You can cancel these calls if you hunt down the human making them quickly by using the “forget” ability which, you guessed it, leads Crypto to hypnotise humans to forget that they saw him.

“The world itself can be stunning to look at, with its gorgeous technicolour painted murals to its 60s record stores that ooze with boppy tunes and mellow blues…”

Destroy All Humans! 2 Reprobed includes a number of different weapon types, including the impressive Meteor Strike, that lets you rain fire from the sky onto the world below, Gastro Gun that produces an alien drone that will fight for you and the Dislocator that lets you bounce enemies around injuring whoever comes into contact with them in the process. This weapon was hard to fully control and left me wondering why it was introduced in the first place. Sure, it’s fun to whirl people around but half the time it’s more of a hinderance to use seeing as you can’t use any other abilities or weapons whilst using it.

Both these new abilities and new weapons introduced are staggered throughout the gameplay, meaning that they do not produce a steep learning curve for players. The game lets you pick from four different difficulty levels and also gives you the opportunity to play couch co-op with a friend via split-screen; a feature available in the original release. 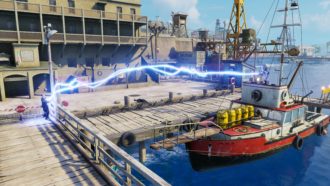 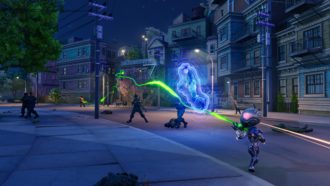 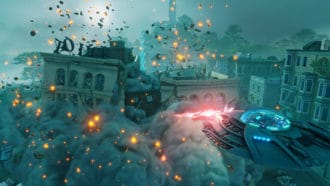 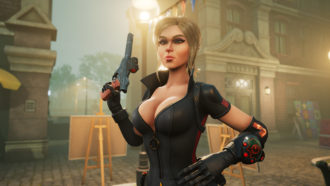 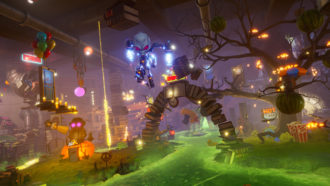 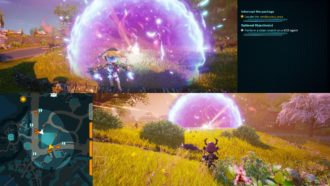 Although these new elements are fun, there are some problems from the original game that have not been fixed and really should have been given more attention. Crypto’s spaceship was always clunky to use and unfortunately that has not improved in the remastered sequel. One mission asks you to zap up enemy vehicles but it is hard to do so due to the restricted camera angles that are available when you pilot the ship. The ship ability, Anti Gravity Field, which sees the ship sucking things up then exploding them, was hard to wrangle, meaning that I couldn’t complete the mini objective to destroy all cars using it. Another ability that only worked occasionally was the Psychokinesis Slam. This ability lets you use the very fun Psychokinesis ability of picking up people and objects but then lets you slam them into the ground. This ability was extremely temperamental and a lot of the time I couldn’t get it to work which was a frustrating experience.

However, the biggest problem with this remaster wasn’t the janky nature of some of the controls but the oversexualisation and handling of the female lead. Natalya is a KGB spy who runs around in an outfit that is made of super tight leather and shows her enlarged chest nearly popping out under the strain of the front zipper. You can choose dialogue options when talking to her that are sleazy and quite misogynistic and even though Natalya gives it back, there’s still a predatory “ick” factor that centres around Crypto’s dialogue. The ending is still problematic in its treatment of Natalya and Crypto’s relationship. It’s a real shame that the developers left in a lot of this sleazy, toxic masc dialogue that a new generation of young boys will be exposed to. While this sequel might look and feel fresh in its visuals and gameplay, it delivers outdated dialogue and a lacklustre narrative that really holds it back.

Destroy All Humans! 2 Reprobed is like a younger, more immature sibling of the original. Gameplay wise, it is bolder and more logically put together, but overall it lacks the comedic intelligence that the original presented. Sure, Destroy All Humans! wasn’t exactly an intellectual experience, but it did offer discussions on social commentary that had a lot to say about society as a whole and problems with 1950s America. It seems as though the developers spent more time on improving gameplay than they did on developing a script and story that would offer the same elements of satire and intellect as the first. Although the original was released in 2006, a very different time socially and politically, this remaster could have ironed out a number of the narrative problematic edges. Unfortunately, by sticking with the “nature and soul” of the original release, the world of Destroy All Humans! 2 Reprobed doesn’t quite feel right in this more progressive world of 2022.