Lost Epic is a 2D Soulslike action-RPG wherein the player must travel across the land slaying 6 malevolent deities on behalf of a clan of witches. With its flashy combat and gorgeous art direction, there’s quite a lot to like in Lost Epic. However, it lacks the depth of the games that inspired it, and several mechanics which end up padding its content lead to a game that becomes less than engaging as it progresses.

In Lost Epic, the original Elder God left the world during a time of war, and in their place, 6 New Gods have set up shop. Dividing the world into 6 separate domains, you play as a knight tasked by a clan of witches to defeat these New Gods and return the land to its former glory.

The central quest is blunted by it being kind of unclear what it is about the New Gods that is so bad that they warrant slaughtering en masse. You don’t see what the world was like before the New Gods entered the picture to give a sense of what you’re fighting for. What’s more, the environments mostly look picturesque and beautiful, which doesn’t suggest that the New Gods are necessarily doing a bad job of running things.

The prologue advises that you are representing a separate group of people called the Perished whom the New Gods have abandoned and who live in the wasteland between the New Gods’ domains; despite this, you travel between the domains pretty frequently and there’s never anyone there. Although most Soulslike games tend to keep their narrative in the background, the central quest in Lost Epic really lacked a sense of stakes and what the end goal is for the protagonist. 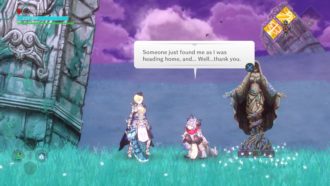 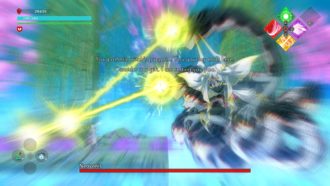 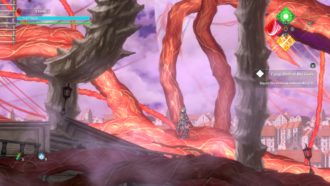 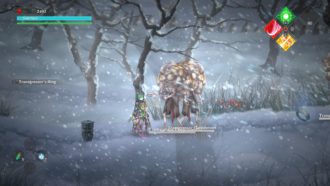 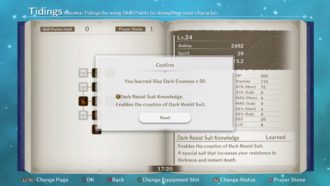 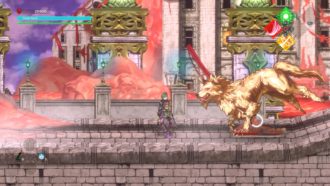 It is pretty easy to ignore Lost Epic’s threadbare plot and focus on the gameplay. There is something of a Metroidvania influence, although you unlock most of your traversal abilities in the first few hours, leading to the rest of the new gameplay features to be solely combat upgrades. Throughout your quest, you explore each domain, finding checkpoints, hidden mini-bosses, and shortcuts. The general location of the next New God you must face is highlighted on the map, ensuring it is difficult to get lost.

As far as Lost Epic’s combat goes, it mostly succeeds at keeping the player’s options varied and remaining tough and visually spectacular. You have a light and heavy attack, along with magical Divine Skills that operate on cooldown timers. Certain enemy attacks can be parried with Divine Skills, leading to thrilling encounters of managing Divine Skill timers and stamina bar management to make it through the fight. There is a decent degree of customisation as well, with multiple attributes which can be upgraded, various weapon types to specialise in, and a rather robust weapon and armour upgrade system.

“The game struggles with enemy variety, with each domain only having a handful of enemy types which are recycled for each combat encounter.”

Unfortunately, Lost Epic is unable to sustain the intensity of its opening hours throughout the whole experience. The game struggles with enemy variety, with each domain only having a handful of enemy types that are recycled for each combat encounter.

This might be forgivable, however, you cannot leave the current map screen if an enemy is near the exit, making the repetitive combat unskippable and forcing the player to mow through the same couple of enemies over and over while backtracking and exploring. This stretching of content extends to the game’s upgrade mechanics, with many of the higher-tier weapon upgrades requiring rare materials, demanding a lot of grinding if you’re seeking to optimise your character.

I also don’t think the integration of Soulslike elements, such as needing to recover your dropped experience points at your place of death, particularly improves the gameplay. Checkpoints are spread too far apart to make the sluggish backtracking more than a frequent annoyance. The game’s attempt to remedy this with mini-checkpoints that respawn the player character, but not your healing items, doesn’t help. It also has that odd design choice where you can’t level up at every checkpoint, but you can teleport to the level-up area from anywhere, adding a seemingly unnecessary loading screen just to upgrade your character. Small mercies, such as multiple difficulty settings and full checkpoints before each boss, are still welcome at least.

When it comes to its visuals, Lost Epic is often gorgeous. From the verdant fields of the opening area to the snow-swept mountains and palatial fortresses of later levels, Lost Epic’s backdrops are a joy to behold. The heroic orchestral score is also delightful and adventurous, even if it can become repetitive after a while.

The enemy character designs could perhaps have stood to be less intricately-designed; much of the combat’s occasional clunkiness comes from odd hitboxes and difficult-to-read anatomy possessed by some of the larger enemies, when less ostentatious designs may have aided the gameplay somewhat. Particularly in melees with large groups of foes, the visual chaos can become overwhelming and make it easy to lose track of your character.

Lost Epic is not a bad game necessarily, but it struggles to stand out compared to similar 2D action titles. The application of Soulslike elements only serve to slow the experience down with dull backtracking and grinding for experience and upgrade materials. Although its combat can frequently be very satisfying and a treat to behold, the sheer amount you’re forced to go through combined with limited enemy variety ensures that repetition sets in quite quickly. If you enjoyed Salt and Sanctuary, but wish its visuals were run through an elaborate anime filter, perhaps Lost Epic is for you. Otherwise, maybe wait for a sale.