I didn’t know Mothmen 1966 would be a horror game before I played it. Unlike most modern horror games that emphasise slasher-style visual horror, Mothmen is a homage to something more old-school. The game’s writing emulates 1960s pulp fiction, and its presentation is akin to early 1980s graphic adventure games. It’s the first episode of what developer LCB Game Studio is calling “Pixel Pulps”, bite-sized horror adventures featuring impressive writing and art. Mothmen 1966 delivers on both those fronts, with fantastic character work and pixel graphics. At around 2 hours, it’s the perfect length for multiple playthroughs, as long as you can put up with the occasionally unwieldy menu-based controls. It’s also a bit of a history lesson: I had no idea “pulp fiction” could refer to something so creepy.

Mothmen 1966 stars three primary characters, and they take turns being the protagonist during each of the game’s 10 chapters. Holt is a gas station owner who struggles with a difficult past and bleak present. Lee and Victoria are a college-aged couple who are both keeping secrets from each other, but only Lee is open about his. Their stories converge during the real-life Leonid meteor shower of 1966, as they encounter, without spoiling how, the titular mothmen. The writing is fantastic, and the best part of the game. The three main characters are deeply complex, keeping a whole lot inside their minds that they aren’t ready or willing to say out loud. And with the focal point shifting between them, you get to learn how they feel about each other. Someone who seems like their own personal hero in one chapter might be someone else’s villain in another. The unsettling, unpredictable situations the three get up to affect themselves and their relationships with each other in fascinating ways. I’m not familiar with OG pulp fiction, but I did get hints of The Twilight Zone and North By Northwest from the story.

The game’s visuals are presented through gorgeously rendered pixel art, using a limited colour palette much like games of this kind did decades ago. LCB Game Studio brilliantly creates a foreboding atmosphere through these static images, though I do wonder if the images would look better on Switch, as a smaller screen might do the art more justice than my 3840×2160 PC monitor. It’s fascinating to see a horror game in 2022 that doesn’t rely on visual jump scares, but rather uses the game’s equally tense sound design right before a graceful fade into the next fright. The period-appropriate soundtrack ramps up the tension, and cleverly brings you down from it, so it can catch you with the next scare. Mothmen 1966 excels at the kind of slow horror that isn’t trendy amongst modern games.

As a player, you’ll spend most of your time making decisions on behalf of the characters and watching them play out. At only a handful of moments, the game will ask you to do something more taxing – usually a small puzzle – and I found these to be simple, but far more troublesome than they need to be. The first of these involves Holt rearranging items on his shop shelves, requiring you to select a dialogue option of which shelf you’d like to look at, then which item on that shelf you want to pick up, then where on another shelf you’d like to put it, then which specific item you want to replace it with. The controls are far too cumbersome, which I understand is part and parcel with the genre Mothmen 1966 is trying to emulate, but I kept wishing I could just click on the images instead. At one point you are given the non-mandatory option to play a card game, which combines the awkward controls with lots of RNG nonsense, so I didn’t stick too long with it.

Some later puzzles will kill your character if you don’t make the right selections in the right order. Retrying will pop you right back to the start of the puzzle, so that’s not an issue. But you quickly realise that your objective is to figure out the correct answers in the correct order, with nothing to guide you but trial and error. Combined with how many clicks it takes to make a single choice, the deaths become tense for all the wrong reasons. These sections are short, and succeed in varying up the game’s pacing, but are nowhere near as strong as the game’s other elements. The game comes with a handy fast-forward feature that lets you zoom through the game on repeat playthroughs and make different narrative choices, but it does mean having to redo the puzzles again. But the dialogue choices that don’t have an end state – so, most of the game – are reason enough for a second run. 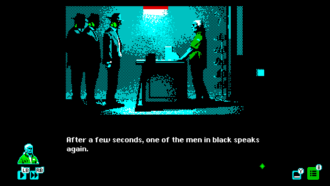 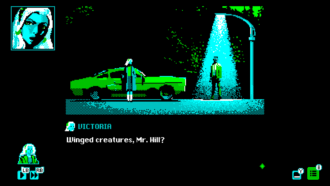 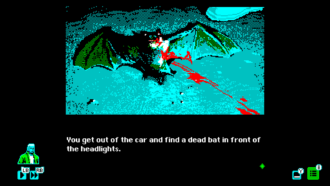 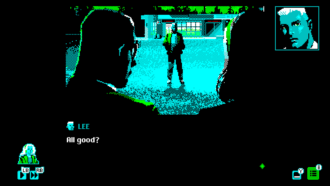 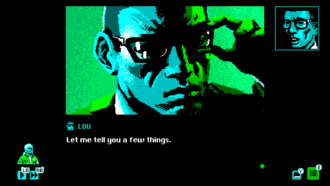 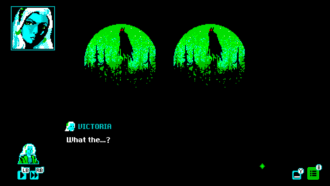 Mothmen 1966 is ultimately a terrific little horror game, reminding us that the genre can be more than first-person jumpscare factories. As the first episode of the 3-part first volume of Pixel Pulps, the adventures of Holt, Victoria, and Lee provide a terrific first impression of what will hopefully be a memorable series. The brief interactive interludes do not hold up to the polish of the writing, soundscapes, and graphics of Mothmen 1966, but LCD Game Studio have a chance to update those mechanics when the next episode, Varney Lake, comes out later this year.