You’re off. Careening into an arena via a quarter pipe, you sense the danger ahead of you. Combatants equipped with sniper rifles, rail guns, riot shields and the likes are bombarding you with heat. Dodging, leaping, flipping and grinding away, you do your best on your trusty rollerskates to make it out alive in this Thunderdome. Soon, you pick up speed and flow, engaging in harmonious bullet ballet, creating symphony and magic with every movement. This is hectic but silky smooth gameplay in motion. This is Rollerdrome.

Fresh off the heels of the acclaimed OlliOlli World, Rollerdrome is another venture from Roll7 and Private Division where the prime design philosophy appears to be that responsive and fluid gameplay is King. The year is 2030 and players control Kara Hassan, a budding new skater fresh to the deathly roller derby game named, you guessed it, Rollerdrome. Kara must brave through eleven levels, making up the opening rounds, quarter, semi, and finals to come out alive and on top of the televised event. Their absolute A-game is needed for this.

This death game is trying for players, with the levels doing their absolute best to cater for that. There was only a rare level or two where I found some spaces a little more restrictive than others. While the levels can blur together a little bit (a lot still have to at least somewhat resemble that roller derby appearance, hardwood maple floors and all), I did find that they were crafted well so that sectors could ebb and weave effortlessly with one another.

The most minimalistic example of a Rollerdrome arena is one that simply offers plenty of railings to grind and ramps to give that little bit of extra air-time, providing breathing space for dodging the many, many bullets and projectiles heading your way. Basic arenas are effective, but the most joyous ones allow feats to occur such as soaring off a quarter-pipe to clear a gap and bursting through a window in Tony Hawk’s Pro Skater fashion.

The gruelling reality of the competition is complemented by environments painted in a captivating but harsh graphic novel art style. As you skate along, rockets and projectiles in hot pursuit will erupt in colourful, fiery glory. Everywhere you go and everything you do feels like a panel out of a retro-made but future-set action story. Mad Max wasteland-style dustbowl levels or the intermissions between chapters where you get to explore the locker room and backstage of the event further bolster this weird, picturesque world you’ll grow curiosity towards.

As per Roll7’s back catalogue, flow state and combos are a key part of Rollerdrome. A big driving force for each level, other than just completing it, is maximising your score. To do so, players need to perform plenty of aerial tricks, grinds, and eliminating of mercs in quick succession to keep that streak going.  Simultaneously, despite being equipped with four weapons (dual pistols, shotgun, grenade launcher and a charging rail-gun of sorts), ammo will be chewed up fast. Tricks come in handy here, restocking ammo while killing foes is of utmost importance to regenerate health. 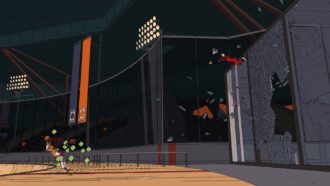 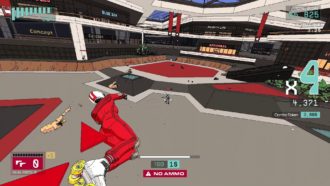 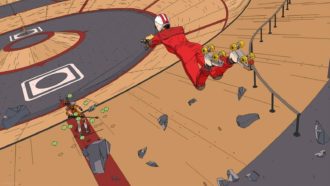 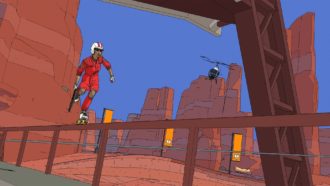 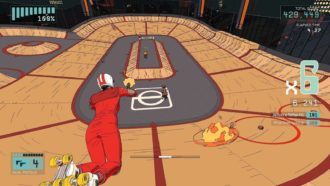 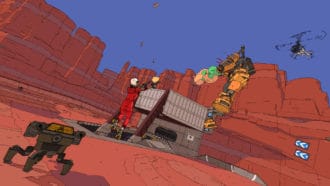 Challenges are also present throughout all eleven levels. The recurring ones in each are to beat a par score and time, along with collecting tokens across each map to boost your combo. Variants will also pop up such as killing an enemy while performing x type of grind or a certain kind of trick over one specific gap. These are an engaging way to challenge and also flesh out Rollerdrome’s relatively brief runtime. Like OlliOlli World, you thankfully don’t have to complete all of these challenges in one run of a level, meaning players will very likely replay a level at least twice — once for combo and performance efficiency, and another for completing all other feats. However, it is in ticking off these challenge lists that I began wishing restarting levels were as quick as they were in Roll7’s other 2022 release.

“…Everywhere you go and everything you do feels like a panel out of a retro-made but future-set action story.”

You can find yourself with a lot of little spinning plates in Rollerdrome and it can be a blast to maintain. Constant cycling of weapons and different tricks helps to not only make things less stale but also allows you to more efficiently take down formidable enemies such as mechs. A well-timed dodge roll away from projectiles, as well as a specific aiming mode that results in a Max Payne-esque slowdown of time, are both quintessential in providing players with that power fantasy that Roll7 so desperately wants you to have. Somersaulting, popping shots off midair, shotgun blasts that are more powerful if you press the trigger prompt at the correct time… the list of mechanics on hand to ensure players are having fun is exhaustive.

This high-octane joy does however let up when it comes to some of the enemy types that are present in Rollerdrome. One of these is the Polybeam. These foes have a readable prompt that allows you to dodge the initial shot, but after firing, the shot becomes a laser that tracks you and devastates through the map. This leaves a fiery path behind it that you can dodge roll to the side to avoid, but not through like other combatants. This means that even if you successfully dodge that first instance, you may very well proceed along, taking on other enemies, only to have one brief moment where you inadvertently slip into that laser stream because your focus was elsewhere. This can ruin an entire level’s run or stop a streak dead in its tracks, becoming the only shot type amongst the sea of landmines, rockets, bullets, and areas of effects that can feel cheap.

Accessibility options are on offer to help mediate some of this, such as removing challenges or adding invincibility mode, though that hardly feels like an ample solution to an enemy that could’ve been more fairly implemented.

On the other side of the coin is the one boss type you’ll find in Rollerdrome, the giant mechanical spider-like tank that pops up in two later instances of the game. This enemy is labelled as the Spider Tank Mk. 1 and 2. It’s not a particularly tough foe to topple. Players just have to cautiously skate up one of its legs that eventually will stick out and resemble a ramp for you to climb. From here, you can skate along its back, taking out a weak point, before it enters a recovery state, forcing you off and requiring you to pick off a few lower-end level mercs before completing the same process. Rinse and repeat.

I wish a little more creativity was employed here. Last year’s Solar Ash was another momentum-heavy game that had players climbing Shadow of the Colossus style bosses, precociously skating rails and using platforming points that wrap around and are diegetically part of the enemy itself. There isn’t any of that here.

There is also an intriguing world that is being painted in Rollerdrome. At the start of each leg of levels, you can explore some of the preparation areas for the bombastic event. Here, you’ll discover plenty of readables, learning the names of some of your other competitors, slices of the world outside, and more. These are all really engaging and something I wish there was only more of. You can step into an offshoot room and find a whiteboard displaying the planning of scripted events, including producers hypothesizing which contestants should have rivalries, which sensitive world topics to touch on and which to avoid. It’s a raw, dystopic idea that’s just grounded enough in reality to be plausible.

These stretch even further when you find emails that indicate potential match fixings or urges between employees to not discuss the very militaristic regime that is sponsoring the Rollerdrome event. I found myself reeling so much at all of this that I wanted world events to occur in levels as well. Putting this game under a microscope, considering its runtime and seeing how close it released to its initial announcement just two months ago, I fully believe Rollerdrome to be a game intended to be smaller in scope and disposable fun. Still, I can’t help but picture a world where we knew even more about it, maybe even actually witnessing and battling some of the other contestants, chasing them around arenas. That could’ve only made for a richer and more engaging world than the modest but enjoyable one we have right now of battling no-name mercs that more or less stay in one place, waiting to be shot.

Rolling credits after about four hours with Rollerdrome unlocks an additional ‘Out for Blood’ campaign where you can run through the same levels again, only with increased difficulty and tougher challenges. This is a welcome way to continue the fun, however, it was only a few levels into this new run that I realised I was happy to call it a day. Stopping early with Out of Blood allowed me to remember Rollerdrome as a game with satisfying movement and gunplay, along with a curious world. That’s far better than the alternative of the game testing me too much and losing its spark.

Rollerdrome is an unbelievably fun single-player experience that hasn’t quite reached its full potential. The explosive gunplay and rollerskating trickery are complemented by the picturesque yet bleak world all realised in a graphic novel art style. However, improvements can be made with some of the enemy types, bosses, and the inclusion of other competitors. Despite room for growth, this game is clearly being made by one hell of a talented team and Rollerdrome proves to be one hell of a shooter.