Gerda: A Flame in Winter Review – Stellar and forlorn

Gerda: A flame in Winter, published by DON’T NOD and developed by PortaPlay, is ‘a tale of compassion, community, and courage, inspired by real life experiences and events.’ This narrative driven RPG-lite is a choices matter game set in WW2 that will have you reeling with its all its tricky decisions and yearning for all the characters that suffered.

In a small Danish village on the border of Germany, a young nurse named Gerda is settling into a quiet life with her Danish husband Anders. However, German occupiers begin amassing on their streets with throngs of weapons and armoury, because the year is 1940 and WW2 has begun. The Germans have come to re-take their borders, which, in a town inhabited by German and Danish neighbours alike, throws the community into a complicated and dangerous political minefield that Gerda soon finds herself in the middle of.

Gerda: A Flame in Winter addresses enormous historical and political events through an intimate and tightly packed narrative. The game revolves around Gerda’s attempt to free her husband who was imprisoned by the Gestapo for being suspected as a Danish Resistance Soldier. And it is through this storyline that the Developer team PortaPlay manages to weave complex social issues of the time period and place that are often skimmed over in historical retellings of WW2.

A Community In Turmoil

The beauty of Gerda: A Flame in Winter is that instead of taking a militarised perspective on war it focuses on the interpersonal relationships and beliefs of townsfolk affected by it. A town once united by trade, religion, and kinship is ripped apart by allegiances, poverty, ethnicity and schemes.

“A town once united by trade, religion, and kinship is ripped apart by allegiances, poverty, ethnicity and schemes.”

Gerda journeys through her town every day and witnesses the slow degradation of harmony that her community once had. Gerda: A Flame in Winter doesn’t stop at Danish neighbours fighting their German counterparts, no, it explores extremely difficult social relations. Gerda’s best friend Margit is betrothed to a German General and her Father is smuggling goods for the Gestapo. Middle and Nis are Danish bar owners housing resistance soldiers that are holding hostage a German boy. Esther and her child are refugees from Germany looking to forge papers for their freedom. Peter, Ander’s best friend, is a resistance soldier asking Gerda to supply them with information and medical aid. And in the cold harsh winter of Denmark, everyone is sick and Gerda, as a nurse, doesn’t have the supplies to save them all.

Gerda: A Flame in Winter asks you to set aside polarised thinking, because there is not one character who is “lawfully good” in the narrative. Instead, what you are presented with is the realistic desperation of people during a time of war and you, as Gerda, are no neutral party to this. The writing direction of the game, and the depth of each character and their difficulties, is something that you don’t see very often in game narratives. Each character is three-dimensional, meaning that they feel like actual people and not a one-dimensional trope to propel the game forward.

Notably, Reinhardt is an extremely interesting character to follow. Originally portrayed as a horrendous German soldier with a penicillin addiction, Reinhardt is a character that you are inclined to steer clear of, and other characters in the game encourage you to do just that. However, as the story slowly unfolds, he becomes one of the most competent to help you achieve your objectives. Don’t get me wrong, Reinhardt is still a totally self-interested character that is only using you for his own means, but by working with him you learn that he is all about re-paying debts and a character that originally is portrayed as one you can’t trust, ends up being someone you can turn to in a time of need. 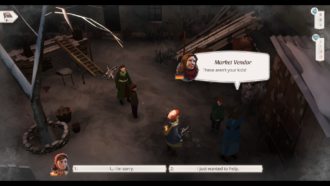 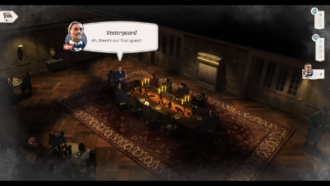 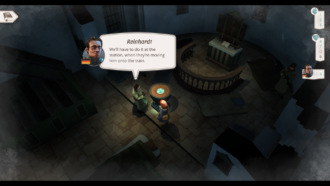 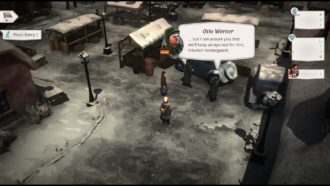 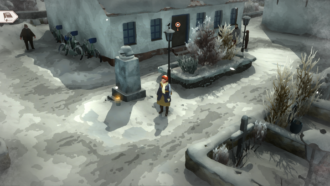 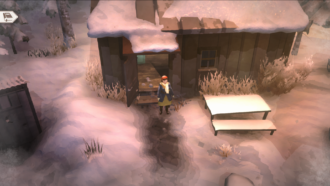 Your choices will damn you

Mechanically, aside from exploring the set pieces of Gerda’s small town and interacting with objects, you primarily progress the plot by making choices. In a traditional ‘choices matter’ fashion, Gerda: A Flame in Winter has multiple endings and multiple paths to choose from to guide your playthrough. Do you wish to Save Anders? Do you side with the Resistance? Do you side with the Occupiers? These decisions are few of many, but ultimately, due to the nature of the setting, most of your choices are difficult and morally ambiguous.

Take one of the first big decisions you make at the start of the game: Gerda is working as a nurse in her small village clinic where she’s treating the town Pastor. Rushing through the door, German soldiers are carrying a man in critical condition and Gerda must decide whether to treat the Pastor or kick him out to treat the German Soldier. The game forces you to weigh up situational morality with the bigger picture. Will this soldier go on to kill others? Will the Germans be indebted to you so you can use that trust later? Will the town label you as a German sympathiser? Or will you refuse and have killed a man who could have lived?

Gerda: A Flame in Winter is rife with decisions that make you uncomfortable, regretful and having wondered if you made the right call. No matter what you choose, someone will always suffer as a consequence of your actions. As a result, the game is always delivering high stakes. You’re actions never feel pointless, nor can you take them lightly which makes for an ingenious choices matter game. Due to the numerous characters involved with Gerda’s plight, even if she succeeds in saving her husband, she can still damn another. The emotional depth of the game lends well to the high stakes choices you make, because of your own attachment to the characters.

Additionally, the game is smart to allow you to gain trust and favour of your allies and enemies alike (if you choose to do so). Players don’t have to outright reject the German occupiers to achieve a good ending, instead players might bide their time gaining their enemies trust to later deceive them. Gerda: A Flame in Winter encourages players to find creative ways to reach their goals, but it will always cost you something.

An interesting and sometimes infuriating mechanic is the dice roll system. Some dialogue options can be achieved through chance, but certain factors like the amount of trust someone has in you, if you favour the resistance or occupiers, or if you have certain objects, will change how easy or hard the dice roll will be. The scenarios you’re in will have a lot riding on a successful dice roll, so when you roll wrong the effects can be disastrous.

Luckily, Gerda: A Flame in Winter was developed to be re-playable. So, if you’re an unfortunate player like myself who made mostly bad decisions the first-time round, you can pick up the game again and experience whole new storylines that you didn’t before. The first playthrough almost feels like an introduction to the rest of the game. This is because you’re going in blind. Players won’t know what path will lead them where, nor how the story twists and turns, so it’s almost impossible to form a strategy without that information.

While it is an interesting attempt by the developers to get players to replay the game, it also makes the first playthrough quite frustrating. To accomplish certain paths you need to build trust with the characters that are related to it. However, you won’t know who to buddy up with until later on in the game, so while you’re spending your early hours getting to know each character and each possible path, this inevitably becomes a disadvantage in the endgame. Without any guideline or hint that you are starting to pursue a particular path, you are left with quite a few unfinished storylines or dead ends because you spread yourself too thin.

A beautiful and harrowing world

Encasing the complex pathways and characters in Gerda: A Flame in Winter is a beautiful visual and musical aesthetic. The majority of the game’s set locations are imbued with muted blues and purples to recreate the harsh winter of Denmark, but it also assists in creating a relaxing and casual experience. Additionally, the game’s structure encourages this relaxed feeling through quite a contemplative diary entry after every scene that is voice-acted by Gerda, followed by a map where you can calmly choose your next location with no time pressure. Paired with the soft music, Gerda: a Flame in Winter lulls you into a flow state where hours can go by without you realising.

And it is through this artistic direction that when a stressful scenario occurs, the music suddenly takes on a demanding pace and the visual landscape changes to something far more ominous and you’re up in your seat and paying keen attention. What’s more is that most of these stressful scenarios are in direct consequence to your previous actions, which makes the game even more compelling. Gerda: A Flame in Winter knows how to perfectly balance its pace to keep you invested without becoming overwhelmed.

Gerda: The Flame in Winter is a wonderfully curated game that considers all touchpoints for a well-written story. Each decision you make as Gerda has a wealth of historical context and emotional weight that never fails to immerse you in its tragic and bittersweet world. The numerous paths and characters to explore makes re-playing the game enjoyable and exciting. And the pace is balanced extraordinarily well through the game’s visual and musical direction. Despite the frustration with the lack of direction with who’s trust to gain or path to take, and the consequent dice roll fails because those stats aren’t high enough, Gerda: A Flame in Winter is an extremely well-put together choices matter RPG.

Gerda: A Flame in Winter is a must play if you’re a fan of well-thought out choices matter RPG games like Disco Elysium. Not only will you get a nail-biting story with high stakes, you’ll come out knowing a plethora of historical details and challenges of the Danish people during WW2. You will come to love or hate the cast of characters, depending on what pathway you choose, but there are endless possibilities because of the games re-playability. Persevere if your first playthrough is not everything that you imagined, because Gerda: A Flame in Winter gets better and better the more you play.