PAC-MAN WORLD Re-PAC brings the cult classic 1999 platformer to modern platforms, complete with a substantial graphical overhaul and fine-tuned mechanics. Although the experience holds up well enough today next to modern platformers, the somewhat barebones nature of the remake may not make it worth returning to for nostalgic fans.

In PAC-MAN WORLD Re-PAC, you play as the famous yellow ball-shaped hero PAC-MAN, who arrives at his birthday having found his family and friends captured by ghosts. Led by the villainous TOC-MAN, a giant robot PAC-MAN with Buzz Lightyear wings, the ghosts use PAC-MAN’s image to lure unsuspecting victims to Ghost Island. PAC-MAN must venture through several themed zones with platforming more than maze navigation to rescue his friends and defeat TOC-MAN once and for all.

To aid in his endeavours, PAC-MAN has several moves at his disposal. He can jump, butt-slam on the ground to gain height and toggle switches, flutter a bit in the air to cross gaps and dash forwards like Sonic the Hedgehog. He can also obtain power-ups to turn metal and giant to defeat certain kinds of foes. Levels are also broken up with bonus maze stages built around classic PAC-MAN gameplay where you must evade ghosts and obstacles and collect all the pellets. 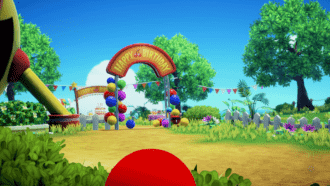 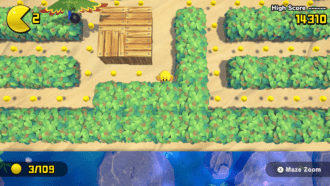 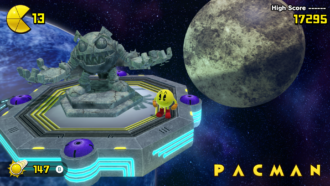 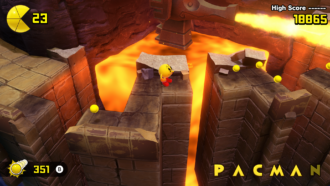 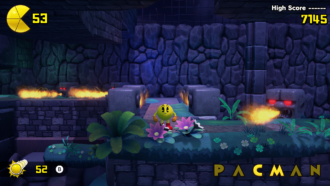 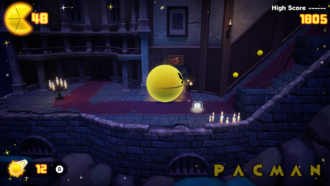 It’s a simple and consistent enough moveset to build a game around, however I do wish it took some more cues from modern platformers. For instance, despite its 3D nature, most of the stages in PAC-MAN WORLD Re-PAC feature PAC-MAN travelling across a mostly 2D plane, leading to multiple occasions where I would jump or dash towards a platform and be slightly too close or far away from the camera and fall to my doom. You have only the faint shadow of your player character cast on the ground as a guide for where PAC-MAN will land. Something like Crash Bandicoot 4‘s solution of a circle showing where you are in relation to the ground beneath you would have done wonders.

The game’s reliance on backtracking also began to grate after a while. Most levels feature at least one segment where PAC-MAN must collect a piece of fruit, and then retrace his steps to a locked door which requires that piece of fruit to reveal an important collectable or switch to progress through the level. Occasional backtracking is fine, but considering how often it is required, it began to feel less like fleshing out the levels and more like padding the content by making you do parts of them again in reverse.

On a positive note, the boss fights in PAC-MAN WORLD Re-PAC are a particular delight. They mix up the gameplay substantially by either using PAC-MAN’s platforming mechanics in novel ways, or just straight-up introducing a racing minigame or top-down shoot-’em-up section out of nowhere. Returning veterans will be glad to know that the notoriously difficult Anubis Rex boss has been revised to be much more manageable in the remake.

PAC-MAN WORLD Re-PAC is quite a faithful adaptation of the 1999 classic, albeit looking far nicer and running at 60 FPS. The remade cartoony graphics look great, with its colourful worlds and crazy enemies looking memorable and appealing. A new Easy mode allowing the player to float in the air a bit longer is a welcome inclusion. The remake also adds a few more cutscenes to flesh out TOC-MAN a bit and add more of a cinematic flair.

Fundamentally, PAC-MAN WORLD Re-PAC is overall a somewhat modernised platformer from the late 1990s, for better and for worse. This includes a lack of substantial replay value outside of finding all of the collectables in each stage and a playable version of the original PAC-MAN to enjoy. Considering there are three PAC-MAN WORLD games, the fact that only the first one has been remade may turn off players seeking a lengthier, more content-rich experience.

PAC-MAN WORLD Re-PAC is a solid remake of a cult classic platformer from the genesis of the 3D platformer boom. Fundamentally, it demonstrates both how well PAC-MAN WORLD’s mechanics, levels and boss design have mostly held up after 23 years, and how the experience is still perfectly enjoyable for someone who has not played the original release. On the other hand, it shows its age in other areas, including short length, lack of narrative and dated gameplay features. For platforming fans looking for a blast from the past, PAC-MAN WORLD Re-PAC as an experience still works well and is worth checking out. That said, don’t expect it to stand toe-to-toe with other 3D platformers released more recently.