A Plague Tale: Requiem is the sequel to the second game I ever reviewed. In my now-cringeworthy review, I came away from A Plague Tale: Innocence with an unexpected attachment to its two main characters, siblings Amicia and Hugo. Their heartbreaking quest to find peace in a bleak vision of Medieval France was the best part of the game, even when the story around them wasn’t always up to the task. Three years later, we finally get to see what Amicia and Hugo got up to after they got on that cart. I’ll try to make less references to spaghetti this time.

Picking up 6 months after the end of Innocence, Requiem finds teen Amicia, her 5 year old brother Hugo and their fellow survivors trying to find a way to cure Hugo of the Macula, the mysterious illness that has been deteriorating his body since birth. After some initial joy, reality comes crashing down on our characters, as they once again find themselves chased by bad guys while a plague of rats devastates everything around them.

Once again, the relationship between Amicia and Hugo is the most compelling part of A Plague Tale: Requiem. Hugo’s worsening sickness parallels Amicia’s worsening mental health, as they barely get time to rest between excruciating situations. And unlike the first game, the story in Requiem finally feels deserving of their rich relationship. Innocence was too preoccupied with hiding, then revealing its supernatural twist. Now that the secret’s out, the narrative can focus more on the characters. Charlotte McBurney and Logan Hannan return as the English voices of Amicia and Hugo, and their performances are stellar, McBurney’s in particular.

It’s a positive, then, that the end of A Plague Tale: Requiem is more interesting than how it starts. Long after the game’s tutorials have ended, the first few chapters get repetitive quickly. The game takes too long on slow, tense moments with obvious horror tropes, while setting up the primary conflicts.

“While Amicia and Hugo are the heroes of the story, the real stars of A Plague Tale: Requiem are the giant army of rats…”

Part of this early-game tedium comes from how the locations are significantly larger in Requiem than they were in Innocence. Stealth sections involve hiding in tall grass and avoiding the gaze of invincible enemies while finding the exit, with little to no offensive capabilities. The size of these early levels make it very easy to get lost, and unfortunately provide a poor first impression of the game’s mechanics. But once the early chapters clear out and the game hones in on Amicia and Hugo again, the game becomes more engaging, narratively and mechanically. The later chapters justify their size in impressive and beautiful ways, while giving you more to do.

But even with more options, stealth is still disorganised. There’s no clear way to see enemies around corners or through walls, so it takes some trial and error to figure out how to get to the exit, made especially harder if you want to detour towards collectibles. Getting spotted by enemies is no longer an instant 1-hit game over, but Amicia can still die easily at their hands, so I learned to beeline to the end at every stealth section.

Combat is perhaps the game’s weakest element. Each enemy type must be defeated in a specific way, and can kill Amicia in just a couple of hits.  In the moments the game makes it mandatory to defeat waves of baddies in a row, it’s overwhelming to juggle them all. Amicia’s trusty slingshot returns, but it’s slow to aim, and getting hit triggers a long, jerky animation before you can move again. As with stealth, I understand A Plague Tale: Requiem is a horror game, and is conveying that horror through oppressive mechanics, and at that the game is successful. But the controls make it hard to tell how much of this oppression is intentional, as opposed to how purposeful the writing is.

But there’s a saving grace for noobs like me. In a particularly stressful combat section, I turned to one of the game’s accessibility options: Invincibility Mode, which makes you take no damage from humans. Every time you turn Invincibility Mode on, the game reminds you that it will “degrade the experience” of the game, which it definitely does,  but I found it helpful for the moments where I died many times and went “ok, fine, I get it, he’s trying to kill me.”

With all that said, stealth and combat against human enemies are enjoyable in their own ways, especially as the game introduces new temporary mechanics throughout every chapter. But they pale in comparison to the other major aspect of gameplay, which is the best part of A Plague Tale: Requiem, as it was in Innocence. It’s time to talk about the rats.

While Amicia and Hugo are the heroes of the story, the real stars of A Plague Tale: Requiem are the giant army of rats eating their way through France. It takes a while for the rats to appear, but once they do, they steal the spotlight in the most disgusting way possible. Seeing thousands of diseased rats was spectacular enough in the previous game, but a new generation of hardware means there are now what looks like millions of rats on screen at once. They move like water, and flow like waves. Asobo Studio have done a marvellous job with the rat physics, even though we can all agree the term “rat physics” is revolting.

Most of your interactions with the rats involve solving puzzles to get through them. As before, they are repelled by light, so you need to figure out how to use it to your advantage. Amicia’s slingshot is arguably more useful in puzzles than combat, as the different types of ammo she can craft affect the rats in unique ways. Some stealth sections also require you to contend with humans and rats at once, leading to rewarding moments where you can sic the rats on an unsuspecting soldier. 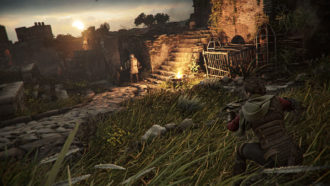 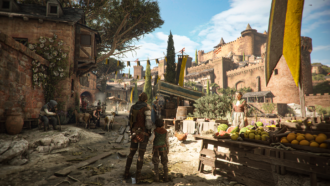 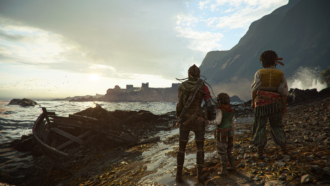 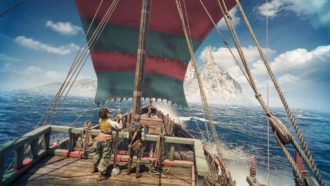 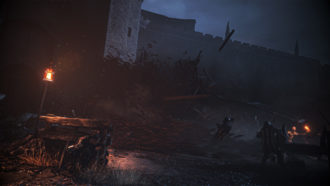 Fresh off 2020’s Microsoft Flight Simulator, Asobo Studio have made another gorgeous game. A Plague Tale: Requiem clearly doesn’t have that Gates money behind it, but it’s still very nice to look at. Every daytime section is detailed and colourful, and every night is effectively terrifying.

“Every daytime section is detailed and colourful, and every night is effectively terrifying.”

Going off the beaten path will lead to collectible feathers and flowers to wear in your hair, plus Souvenirs, which are optional hidden cutscenes that further count as collectibles. Souvenirs add a surprising deal to character interactions, so it’s beneficial to find as many as you can.

The game comes with a welcome Photo Mode, allowing you to take in the sights at your own pace. It’s actually quite easy to go off bounds with the camera, which I found to be a fascinating lesson on how Asobo was able to make a game that looks this good with the resources they had.

Unfortunately, a handful of glitches took the shine off of certain elements of Requiem. One puzzle solution didn’t appear because it was triggered by character dialogue that never activated, leading me to reload a checkpoint. Rats sometimes appear in places they shouldn’t, but if you die or reload a save, they won’t appear there again. One major visual glitch – which I won’t spoil – made quite a tense mid-game scene accidentally funny, which persisted even after I reloaded a checkpoint.

And speaking of the checkpointing system, it’s as inconsistent as I remember it in Innocence. One early puzzle requires pulling a lever, then listening to some dialogue before the next section. I failed the puzzle and was sent back to before I pulled the lever, which meant waiting for the same dialogue to end. But sometimes the game will smartly return me to the middle of a large stealth section, so I don’t have to redo anything I’d already done. When it’s good, it’s good, but it isn’t always.

A Plague Tale: Requiem is both a worthy sequel to a sleeper hit, and a brilliant game on its own. Asobo Studio have shown their knack for using believable human relationships as the basis for an unrealistic supernatural horror story. The next chapter in Amicia and Hugo’s story deserves to be seen, if anything because the narrative is both unique and powerful. Despite the increasing brutality of this world and minor mechanical issues, you’ll be in safe hands with this game, unlike our young heroes.