Circus Electrique is part story-driven RPG, part tactics, part circus management, and completely enthralling– all with a steampunk twist. When everyday Londoners mysteriously turn into vicious killers, only the show’s talented performers possess the skills necessary to save the city.

Welcome to the reimagined Steampunk London in 1899 where things aren’t what they seem. Thanks to The Spark, London has much more technology than expected. You play the role of Amelia, a journalist, to help their uncle clean up his mess after the re-opening of Circus Electrique caused The Maddening. This has turned the town ‘Vicious’ and everyone from Chimney Sweeps to Bobby’s are out for blood. Somehow though, the circus’s performers are unaffected by The Maddening and are the only ones who can save London and help Amelia find out what really happened.

There are 2 separate systems of gameplay within Circus Electrique. There is a Circus Management Sim and then the Dungeon Crawler. The Circus Management sim is where you start each ‘day’ in game. To fund your dungeoneering you must put on circus shows to gain money, crafting items and materials. To do this you’ll need performers; you start with a Strong Man, Clown and Fire Blower, but later on will meet and unlock the ability to recruit Escape Artists, Illusionists, Fakir’s, Robot Bears and more.

There are 2 sides to hiring performers. Firstly there is an entertainment factor that runs into 4 stats: Fun, Amazement, Thrill and Laughs. They’ll have symbols of performers they like to work with and those they dislike working with, alongside different arrows or stars. The secondary side is for combat, showing off their skill abilities and traits. Picking the right performer can become downright paralysing as there is a lot of information to consider. Thankfully there is an in-game encyclopedic wiki that you can reference at any time, but I did find this to be incredibly overwhelming to begin. It does take quite a while to understand all the symbiology that the game requires. 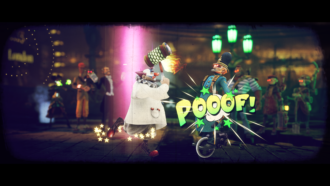 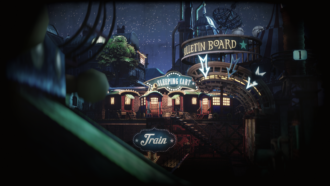 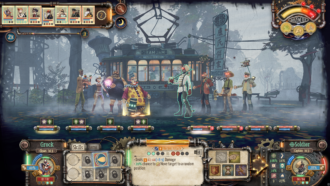 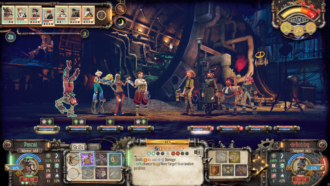 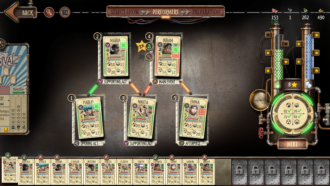 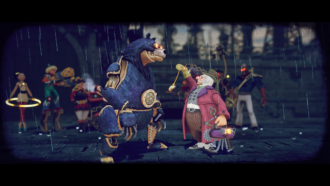 To set up Circus shows you’ll need to select your performance and then add your performers. Each performance will have a specific number of stats it needs. For example, the Afternoon Matinee will need performers Fun stats to be at least 20 to go on, as it’s a family friendly show. Also, as mentioned previously, the performers all have different preferred classes to perform beside and preferred positions linked to the arrows. There can be a lot of juggling and rearranging to get the right performers in the right slot. There is an ‘auto’ add button which doesn’t seem to always be incredibly intuitive but if you just want to throw a show together and be done with it, it’s there for that reason. Keep in mind there is no save configuration for next time, performing the same show day after day reduces the Fun, and then the performers in the show cannot also come out for battle. The management is off the charts if this is your kind of thing.

The dungeoneering portion is most assuredly based on Darkest Dungeon, a strategy based RPG that uses turn based lined combat with limiting abilities based on where you and your opponents are standing. In Circus Electrique, the game replicates the experience really well. Each character receives 6 random abilities that are pulled from a pool of skills based on their class. They are loosely based on the generic basics of tank, healer, ranger and so on, but with twists based on the circus performers they are portraying.

Each set of abilities will have a mix of attacks, debuffs, buffs and healing. For example, the Clowns tend to have a mix of ranged and healing abilities, while the Strong Man can intimidate and bonk enemies with his dumbbell. Each attack also has an RNG aspect to it, which thankfully is telegraphed when you mouse over an enemy with an ability selected. You’ll be able to see the percentage chance of hitting, the damage range and then the ability damage type. Ah yes, there is also damage types like fire, water and electricity, which are also effected by the weather. So not only do you need to take note of the abilities and traits of who you select to go to battle, but also what the enemies weakness or resistance is combined with what the weather is like. It rains a lot. It is London after all.

“If you wipe one too many times then there is no way for you to recruit or equip your new performers.”

The abilities aren’t all there is to consider though, as there is both equipment and single use items you can use mid battle as well as a global ‘amazemeter’ that you fill up to cast global abilities on your team. This could be healing or dealing damage to enemies. Another thing to consider with the gameplay too is that there are 2 different ways to remove an enemy from combat. Traditionally by lowering their HP to 0, and then you also have the option to demoralise the enemy into fleeing by attacking their ‘Devotion’ to the cause. Devotion was easier to attack at early on, however, most abilities that target opponents devotion can also effect the performers devotion. Think of it similar to ‘stress’ in Darkest Dungeon. If the performers devotion falls to low they abandon your circus completely! 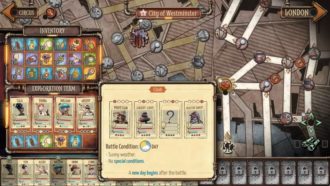 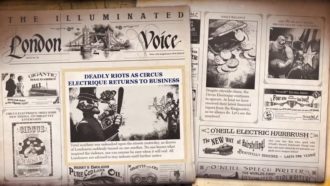 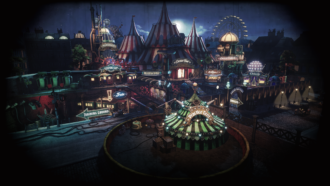 It is worth noting that the normal difficulty of Circus Electrique is quite challenging. There can come a point where starting a new game is the only option, which is something I found out hours in. There are several currencies and crafting materials required to hire, upgrade and equip your performers. When they die in combat, they’re gone. If you wipe one too many times then there is no way for you to recruit or equip your new performers to even stand a chance against the enemies. It felt very Fire Emblem. Each performer is super important to stay alive. If you are a Pokémon player that always uses attacks and never uses the other skills you may find this game quite difficult, so maybe start on Easy until you get your bearings.

There is a lot to talk about with the gameplay. It is a really complicated little system that does work together, but will take a lot of time to get a handle on. Sometimes Circus Electrique feels like 2 very different games smashed together. Both would work really well on their own, and whilst they do work together I found myself wishing one side of the coin was a little bit more easier to manage. There are so many different little symbols, abilities and factors to be mindful of it can definitely feel overwhelming. However, there are not a lot of games out there with this level of management so there is something to be said of a really niche game that is done really well.

Circus Electrique has an amazing aesthetic and it is absolutely gorgeous to look at. The artists nailed the brief and everything is themed appropriately for the time period. The performers are diverse and beautifully executed. There isn’t the same sprite for each performer either; different outfits, hairstyles, facial hair, help create a colourful palette of performers to choose from, whichi is a small detail that really pays off. The music and sound effects are also calming, pleasant and helps bolster the mood and immersion. As much as I absolutely hated the bosses, their designs are very creative and appropriate for the setting. It is hard not to love the look and feel of the game, it definitely ticks all the boxes and gives the player a whole body experience into an alternative London.

Circus Electrique is truly a unique experience compared to the range of games on offer today. With a mix of several different genres, it somehow manages to blend them together in a way that makes logical sense and create seamless gameplay. However, the caveat is that there is a lot to learn as it isn’t a simple casual game. Both management and tactical RPG systems require a lot of strategic planning and knowledge which can become overwhelming quite quickly if you aren’t careful in following all the directions. Despite this, Circus Electrique delivers a gorgeous environment to play in alongside a diverse range of performers to pick from. If steampunk is your aesthetic and you enjoy a challenge, Circus Electrique will give you an experience you won’t soon forget.