It’s official. Justice Sucks does suck. Samurai Punk has created a game that literally sucks so hard and I couldn’t be happier. That is to say that it’s meant to suck. You know, because that’s what vacuum cleaners do. But what exactly makes playing as a robovac so much fun? JUSTICE SUCKS: Tactical Vacuum Action isn’t just a vacuum cleaning game—it’s a challenging sandbox game that rewards quick thinking and bold strategies with epic combos. This is one robovac you don’t want to cross.

The game’s story follows Dusty, a humble robot vacuum that’s suddenly sentient after a break-in. Forced to protect the family home, Dusty kicks ass hacking and creating chaos for the would-be thieves. This could honestly be the whole premise of the game, and it is to some extent. Now that Dusty is sentient though, the robot vacuum company warranty squad comes to destroy them, and so begins Dusty’s arch to gain the powers they need to protect the family. Along the way, there’s an assortment of cutscenes that really set the zany tone for the game, bridging the levels with intrigue and the right amount of context.

Developer Samurai Punk understood the assignment and then some! Each of the game’s locations has its own set of crafted challenges that reward the player with the power to unlock the following location. Some require Dusty to guard valuables from thieves, others involve delivering parcels or even members of the family to a pick-up point, and then some have you cleaning an area in an allotted time which is somehow the standout! I think the satisfaction this game brings is on par with the likes of Power Wash Simulator because it gives you a real sense of achievement. Each challenge has its own individual difficulties but that feeling of completing a goal is monumental.

Wheels on the ground

The nightclub was my favourite of the six maps on offer because it was such a funky environment to explore as a robot vacuum. It’s not a locale I expected to enjoy exploring, and yet it feels like a natural progression as the player unlocks each of the areas. I also enjoyed how well this area was able to include so many obstacles for Dusty to learn how to navigate. Multiple levels, steep inclines, pits, and even stairs really build the player’s awareness of this location and encourage quick problem-solving. Exploring feels really purposeful, allowing for a different approach from the first map set in the house. This map, while feeling quite large, really plays on cornering the player into areas with the enemies closing in.

“The adrenaline rush of racing around the level in those final few seconds to find the last 3% of mess is the real thrill.”

My absolute favourite part of the more violent levels is cleaning up after the carnage. With limited time, it truly pays to clean as you go. The adrenaline rush of racing around the level in those final few seconds to find the last 3% of mess is the real thrill. This small finishing act on each story mission makes Dusty feel so purposeful as well. This isn’t just about him causing carnage but also keeping things clean and orderly. That said, if you don’t do the final clean, you’ll only be penalized for a poor effort in tidying up.

From the get-go, Justice Sucks feels super approachable to pick up. While it does at first seem like a stretch to control both the movement and Dusty’s hacking abilities, it’s not long before you’re moving, sucking, and hacking like a pro. Honestly! It’s pretty addictive and makes playing feel like more than just an exercise in goal achievement.

The game practically begs to be played, and being so replayable helps with this immensely. Not only do I want to test out all the challenges but I feel as though I am drawn to return when I find a power-up that suits the situation just right. Allowing the player to return to early levels with fresh power-ups is smart. This isn’t like other objective sandbox games that give you the challenge and then force you into the next level upon completion—Justice Sucks is a lot more precisely paced.

I also love the leaderboard. Being able to check out your friend’s scores is definitely a good motivator to jump back in and see how much mayhem you can create. The bragging rights of being the best sucker are too good to pass up, right? 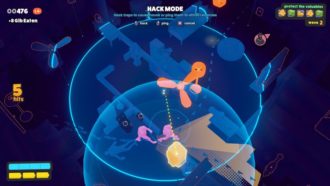 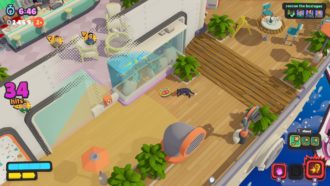 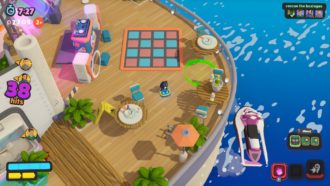 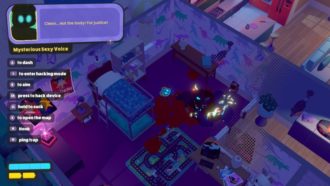 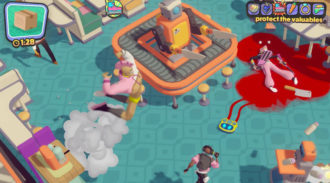 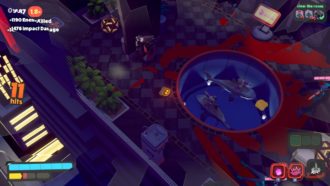 It’s no surprise that Justice Sucks has an awesome soundtrack to accompany all the areas. From the beginning of the first area, one can instantly tell the level of craft that has gone into creating the music present in the game. Honestly, it helps make all the sucking you’re doing even more worth it just to zoom around to the backing track. When the music hits the mark, it helps carry the tone in some of the more dicey levels.

With so much to love about Justice Sucks, I guess it’s time to see what isn’t quite there in the game. Having extra abilities is an awesome addition to both the game and Dusty’s impressive toolkit, but in the heat of the moment, I’d often forget them. And when I did want to use them, they’d require more blood from Dusty’s kills to be activated. In some of the challenge maps, power-ups do appear as pick-ups which I think largely works. Having power-ups present on the map could be the answer but I think I’d prefer for the powers to instead just be easier to attain or given more freely after significant events such as big combos or kills. The powers need to be earned, but currently, the reward can feel like a carrot that’s being dangled just out of reach for a little too long.

Justice Sucks definitely sucks you in with such a neat idea that many games would do well to aspire to. Give this indie game whirl and I’m sure it won’t be long before you’ll be off buying your own (possibly sentient) robot vacuum cleaner. When it comes down to it, games like this make me so proud to be able to enjoy such good Australian games. Dusty deserves all the love that a sentient, kinda hot robot man could ever need. I do hope this isn’t the last time Dusty shows us how to suck up the crime. There’s a lot of potential for Dusty to get up to even more mayhem, especially given all the trouble his family gets into.

It’s hard not to love the adorable Dusty’s capers in Justice Sucks. It’s a fun arcade game that isn’t afraid to tell a story as well. Each new area brings its own obstacles to face, but in the end, Dusty has all the tools to rise above the bad guys in this sentient robot action romp. Being so replayable works heavily in the game’s favour. It’s a great time for anyone keen to jump into a challenge-orientated arcade game packed full of chaos.