Do you remember New Years’ Eve 1999? The Prince song was played on repeat for weeks beforehand, we were all scared that everything would collapse, the new millennium was looming, and teenage me was half petrified half exhilarated by the prospect of welcoming the 00s. Serial Cleaners, the sequel to 2017’s Serial Cleaner, is set in New York on New Years’ Eve of 1999 and centres around a very different kind of celebration. The top-down, stealth crime adventure is set in a funeral parlour where four crime scene cleaners discuss their biggest jobs of the decade and reminisce about how they got into the business. The location of these celebrations is symbolic due to the fact that these characters do specialise in the business of erasing the blood off the hands of those whose palms are already very dirty.

Let me preface by saying that Serial Cleaners isn’t for the squeamish. Developers Draw Distance have commented that they were inspired by gritty 90s cult classics Reservoir Dogs, The Usual Suspects, and Pulp Fiction, movies that are notorious for not holding back on making their violence extremely graphic. Therefore, throughout this review, I will be discussing in detail, due to the gameplay, some violent imagery.

Serial Cleaners once again involves the 2017’s protagonist Bob, but this time he has wrangled three others to help him clean up other people’s messes. Of course, due to the unusual nature of the job, these three characters are on the more eccentric side. There’s Psycho, a looming chainsaw-wielding thug who speaks in a disjointed, scattered manner. Vip3r, who is obviously modelled on 90s rave culture with her fluro parker and matching fluro bangs. And finally Lati, a struggling artist who cleans to earn money to create art.

You play each character’s past crime scene memories one at a time and each happen in a designated space where a crime has taken place. These locations include a games arcade, an apartment, and a prison. Your main aim is to clean up the scene without being nabbed by the law enforcement that surround you. To do so, you have to rid the area of bodies, evidence, and also clean up the majority of the puddles of blood that are just as present as the cops patrolling the area. To make things a tad easier, you can switch on your “crime sense” which slows down time and also highlights important aspects of the environment, such as where keys can be stolen from and where evidence and bodies are located. Bodies can be picked up and carried or pulled to your car, where you can deposit it in the boot. This area is also your save point. Evidence can just be picked up, but “big evidence” such as shovels and bags need to also be dumped in your car. The blood can only be sucked up via a vacuum cleaner, that if in a certain radius of the law, can attract unwanted attention. If you are caught, you can either try to out run them or admit defeat which will take you back to your last save.

A lot of this gameplay is very repetitive; in every new crime scene you grab a body, use stealth, dump body, repeat. However, the stunning location art alleviates some of the boredom associated with completing the same tasks over again. You’ll experience locations that would be impressive if you saw them in real-life such as an octopus sculpture in a gaming arcade that has a tentacle that also acts as the back of a booth, a yacht with Miami Vice white/pink neon décor, and a crusty dive bar that’s brown shadings really makes you imagine how sticky its floors would be.

“these characters specialise in the business of erasing the blood off the hands of those whose palms are already very dirty.”

Another way the game spices things up per location is via the character’s special abilities. These unique talents also give the player an insight into each character’s personality. Psycho, for instance, can use his chainsaw to chop up victim’s bodies. If he does this in front of an officer, they will usually faint and you can dispose of them in one of the “cop drop-off” bins. You can also hurl the limbs at the cops knocking them out cold, allowing you to drag and dump them. Vip3r is an expert at hacking, so she can hack certain terminals and turn lights/security cameras on/off, confusing the police. She can also sneak through air vents, making it easier for her to move from one room to the other. Vip3r can also “hide” under tables, which is also a skill that Bob can use. Bob can also skid across bloody trails and make a quick getaway if he’s being chased. Lati can jump over certain barricades and also is armed with a spray can that can decorate walls with “F**k the police”, making law enforcement stop and stare at her art work which gives her another way to sneak past.

Sneaking in Serial Cleaners can sometimes be a bit too easy, as the cop NPCs aren’t as intuitive as they could be. The reactions of police were varied; sometimes they would freak out and run around the scene, other times they would just have a simple question mark above their heads and then go back to walking their normal route. The game has a three star police warning ala’ GTA. If three of the stars are lit up, the police will walk around with their guns at the ready, shooting you on sight. The NPCs would walk the exact same path meaning if you knew their rhythm, you could easily sneak around them; however, the sneaking overall was quite easy and a difficulty option would enhance the game’s appeal. 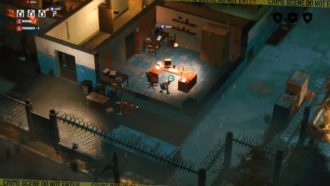 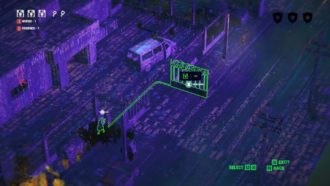 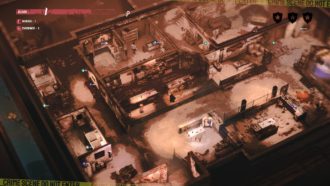 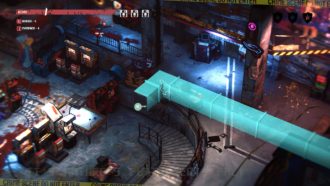 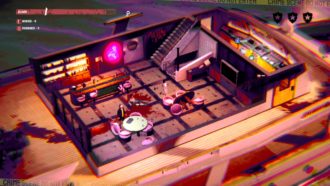 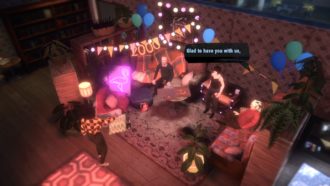 There were also a number of cringy moments in the game, mainly when it came to Vip3r’s dialogue. She spoke in text speak and though this was supposed to make her look “hip”, it just made the developers look out of touch with how young people in the 90s spoke. I also encountered a few glitches that made me have to start a clean over. One time the screen indicated I had one body left and more blood to clean up but I had already extracted every body and spill. Replaying this clean made me realise that though I did enjoy playing through the locations the first time, a second playthrough wasn’t that exciting. I found that the flow of the game meant that a lot of the gameplay was more on the relaxing side, which isn’t usually the case with games that fall into the “stealth” genre. This slower pace and calming loop is especially confusing when you consider the game is marketed as an “action” game. However, though the action may not pack enough punch, there’s still a lot to love about this unusual cleaning sim.

Serial Cleaners has taken the monotonous act of cleaning and spun it on its head by placing it in a gritty criminal world with characters that are eccentric and passionate about getting the job done. Though the gameplay can be repetitive and the dialogue may make you wince, the location art and the special abilities of each character makes up for the lack of “action” in this “action crime” game. Instead, the elements of dead bodies, shining pools of blood, and the game’s dark colour palette brings the excitement as you clean up the carnage other games would usually have you create.