The Last Oricru Review – The journey you pave yourself

When embarking on a journey of epic proportions, you are excited because you don’t know what’s going to happen next. That’s compounded with The Last Oricru, where your adventure can take several paths based on the choices you make. Everyone’s journey can be different, which makes you wonder about how everyone approached the choices in front of them.

You take on the role of an immortal human named Silver, who awakens in a strange situation that they don’t know much about. They can’t die, no matter what happens, though they do respawn at a previous location after every death. Silver learns the basics of combat, but soon finds himself in the middle of a conflict with two factions, the Ratkins and Naboru. A third faction, the Broken Army, is eyeing the conflict and attempts to change the status quo for themselves. Caught in the crossfire, Silver has to survive with the help of one of the factions, or play each of them to his own advantage.

The Last Oricru will have you journeying across different lands on your journey. What makes this stand out from other titles is that Silver and every other character you meet has a personality. Silver has a sarcastic, tired attitude, as he’s just trying to survive and complete his mission. Everyone else has plans of their own, and they aren’t ready to let go of an immortal who can’t die.

These personalities clash, but in a good way. You can see that no one is perfect and that everyone’s looking out for themselves. Instead of an obviously good and bad side, you have imperfect factions with their strengths and flaws. There’s no guilt-tripping because you chose a faction that seemed “obviously evil”. The faction you choose to support is chosen because you feel that allying with them was the best decision at the time. You make a choice not because “it’s the right thing to do”, but because “it’s the right thing for you”. It’s all about survival, and that’s what makes the story great.

For example, you meet two factions at the beginning: the Naboru and the Ratkins. It’s clear that the Naboru are mistreating the Ratkins, and that the Ratkins want to rebel. Allying with the Ratkins starts a plot to overthrow the Naboru and strike at the heart of their empire, but that puts you at considerable risk. On the other hand, the Naboru don’t think poorly of you and offer you safety, treating you with a good deal of respect. Being a Ratkins revolutionary sounds like you are standing on the side of justice, but your lack of involvement in the conflict can make you prioritise an alliance with the Naboru. You’re not guilt-tripped into thinking either decision is bad, because Silver prioritizes his interests as you would have in the same situation.

Silver’s focus on his survival and well-being make these branching decisions feel like you are choosing your own way. You’re not worrying about being good or evil, and these nuances never truly appear. You’re a human caught up in a factional war, and that gives you the freedom of choice to do what you want. It’s refreshing to not have to worry about “being the bad guy” or “doing the right thing”. You can be a defining force that changes the fate of a faction forever, but being uninvolved and looking out for yourself is given just as much weight.

“If you want to enjoy the branching narrative, you can cut out most of the struggle to appreciate the story you chose for yourself.”

With the story having multiple directions, there are multiple endings. The Last Oricru is a game that’s designed to be played more than once, because you want to see what it’s like if you chose differently. When it comes to gameplay itself, The Lost Oricru is a Souls-like game, and the combat can be punishing. It’s nice to see that there’s an option to lower the combat difficulty for those who want to enjoy the story. Catering to the crowd who loves a challenge while remembering that some people want to enjoy the story is a great move. While combat isn’t easy enough that you can beat everyone with a stick, it’s simple enough that anyone can quickly grasp the basics and succeed.

The combat in The Last Oricru isn’t too different from other games in the genre. You have equipment you can gather, a physical or magic oriented combat style, and potions to help you heal. Enemies will be crafty, attacking you from a distance or ambushing you when you aren’t looking. You will be dying in this game frequently, but you will learn from your mistakes.

Physical combat isn’t complicated, as you swing at enemies and do your best to avoid getting hurt. You will constantly be scrounging up weapons and armor from fallen enemies, or purchasing new equipment. It really reinforces the survival mindset when you get lucky and pull a great piece of armor that you immediately equip. You will do whatever it takes to survive, and enemies will have to deal with your newfound fighting potential. Magic isn’t complex either, as you get a suite of long range attacks that can deal massive damage to your targets. You also have different objects that grant you access to other spells, like a healing sphere, giving you great flexibility in defining what you want your magic usage to be.

One interesting change to the combat system is that magic users don’t have a potion. Early on, all players get access to a Mana Drainer, a weapon that deals damage to enemies and converts some of it into mana. While this gives you a theoretically limitless source of mana, it puts anyone using magic at risk early on. Magic has powerful applications, but relying on the Mana Drainer to refuel can be risky since enemies are still dangerous. Getting into close range as a magician is often a death sentence, but you have no other choice but to use the Mana Drainer. Your other alternative is refueling at terminals, but that heals all enemies and doesn’t help your progress.

It’s a creative idea, but it does discourage players from taking the magic route. Building a magic user will take the focus away from the physical side, meaning that going in to harvest mana is risky at best. While the process does get easier with practice, it can also make magic look almost unusable at times, because you put yourself at great risk when you could just swing with a physical weapon. It’s high-risk-high-reward gameplay, but more often than not, the risk just isn’t worth it.

“If you’re swinging at an enemy anyway, why use a Mana Drainer when you can use a sword?”

If you have to go in swinging as a magician at some point, you might as well forgo magic entirely. It doesn’t help that magic doesn’t always hit its target despite locking onto them, which makes it feel like magic carries too much risk for too little reward, or requires a significant investment before it becomes practical.

You will use Terminals to restore yourself back to health and level up. It’s also the place where you can play co-op with another player. That player can play with you online, or play together in split-screen format. You will still be in control of the story and the decisions that are made, while the other player primarily serves as combat assistance. There are spells that you can cast with another player that can make a big difference on the battlefield. It’s great to have a benefit to playing co-op, but it doesn’t seem to offer a large benefit to players. Fighting side by side is always fun, but what you gain from the co-op only spells isn’t worth the extra set-up. Co-op spells are a nice feature, but it isn’t the reason why two people are playing the game.

One key aspect that would have been helpful in The Last Oricru is a map to help guide you along the way. It’s easy to get lost, and many characters reference locations as if you should know where they are. Unfortunately, not every path is obvious and it’s not always clear what you are looking for. With a game that relies heavily on its story as a key sticking point, it’s sometimes frustrating to have to blindly look around and not know where to go. You might be tasked with going into the sewer, only to realise that what you think is the sewer is not the sewer that’s being referred to. Other Souls-like games may not have maps, but with everyone plotting for power, it would be helpful if locations were made clear. 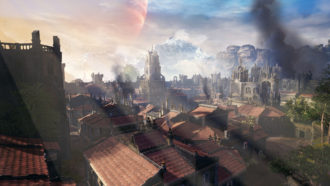 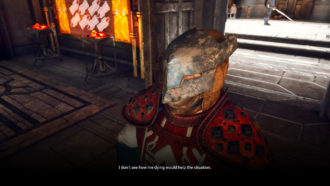 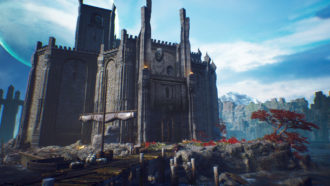 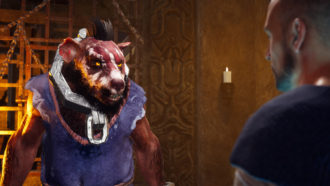 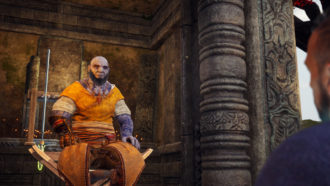 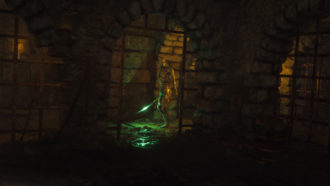 The Last Oricru does its best to stand out from the competition with its story and branching decisions. It succeeds on that aspect, but unfortunately doesn’t deliver much that’s different from a Souls-like game in other regards. There’s a story that’s interesting and dictated by your choices, but you are otherwise thrown into a punishing combat system and an environment with a lot of searching. The two don’t work well together, and even an easier difficulty isn’t enough to save players from getting lost or not understanding where they need to go.

The Last Oricru is a fun storytelling experience told through the eyes of the Souls-like genre. It’s great to see everyone working for their own ends, and not being able to identify who is good and bad from the start. Focusing purely on what you think is most advantageous creates a story that fits your own personality well. But everything else is a regular Souls-like experience from top to bottom. There are attempts to stand out, but other than the story, they don’t have the impact that really leaves a positive impression in a player’s mind. The Last Oricru takes some risks, some of which pay off and some that don’t. It’s perfect for those who like their Souls-like games to have a good story, but if you’re not a fan of the genre, you’re better off staying away.